Tens Of Thousands Rise Up Against Netanyahu – Media Blackout

Tens of thousands of citizens have taken to the streets of Israel to rise up against the totalitarian Netanyahu regime amid a total media blackout. 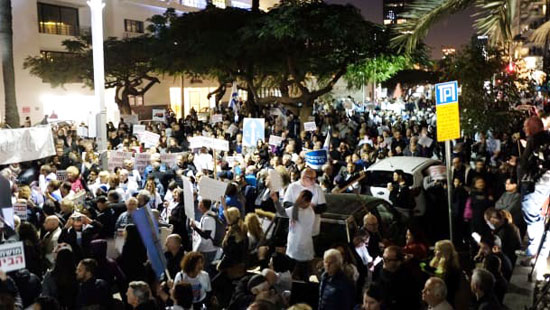 Haaretz.com reports that demonstrators on Tel Aviv’s Rotschild Boulevard held signs reading: “Out with the corrupt!” and “Not leftist, not rightist, but honest!” or “Being a pig isn’t kosher” and “Bibi [nickname of Benjamin Netanyahu] go home”.
Hundreds of protesters against corruption gathered in Haifa as well, with signs reading “Democracy isn’t a suggestion” and “Shame on you”.

An altercation broke out towards the end of the demonstration when a small group of anarchists carrying signs supporting a boycott of Israel tried to join the protest. Anti-corruption demonstrators verbally attacked the group and the police had to intervene after protesters started shoving them and tore signs supportive of the BDS movement. [The Boycott, Divestment, Sanctions (BDS) movement works to end international support for Israel’s oppression of Palestinians and pressure Israel to comply with international law.]

Those that partook in the protest were angered by a new bill that would have prevented police from publicizing recommendations on indictments. The controversial bill was widely believed to have been drafted to protect Netanyahu – under investigation in two high-profile corruption scandals – by keeping the public in the dark. 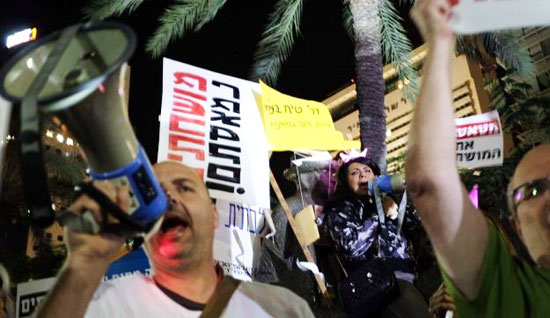 At the previous rally, on Dec. 2, 2017, some 30,000 protesters marched along Rothschild Boulevard to Habima Square, many of them calling for Netanyahu to be locked up.

A day after the rally, clearly bowing to public pressure, Netanyahu announced that he had asked lawmakers to devise a new draft of the bill so that it would not apply to the ongoing investigations against him.

For most of 2017, every Saturday night, demonstrators have gathered in Petah Tikva, the hometown of Attorney General Avichai Mendelblit, to protest what they perceived to be his foot-dragging in investigating allegations against Netanyahu.
These protests, which initially included a few dozen demonstrators, expanded over time, at their peak drawing tens of thousands. 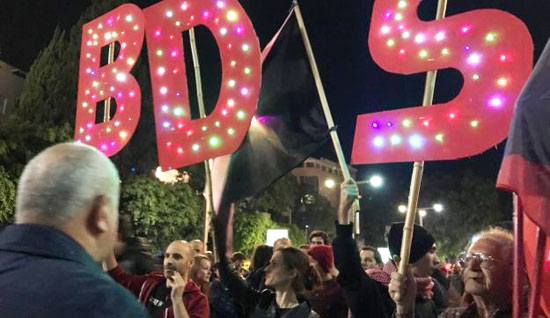 The two main leaders of the protest movement are Eldad Yaniv, a well-known anti-corruption crusader, and Meni Naftali, the former chief caretaker of the prime minister’s residence who rose to fame after suing Sara Netanyahu, the prime minister’s wife, for abusive behavior toward him and other household staff. Naftali won the case and also prevailed in an appeal.

Yaniv and Naftali decided to move the protests to a more central location in Tel Aviv in December because of the huge public outcry over the so-called “Recommendations Law”. The protestors began their march, symbolically, outside Independence Hall, where Israel’s Declaration of Independence was first read. Then the weekly protests were moved from Petah Tikva to Tel Aviv.

Concerns have been expressed that fewer demonstrators will show up to future protests not only because Netanyahu agreed to amend the controversial bill, but also because of the tensions flaring in Jerusalem, the West Bank and Gaza over the Trump administration’s decision to declare Jerusalem the capital of Israel. Accusing Netanyahu of “heating up the turf” in order divert attention from the corruption scandals threatening his reign, Yaniv urged supporters, in a widely shared Facebook post, to show up in force to the Dec. 9 protest. And they did.

The Saturday night protests went on in 2018 also, with the participation of up to ten thousands people.