The American Officer Breaks Silence: Aliens Had No Nose, Nor Mouth… 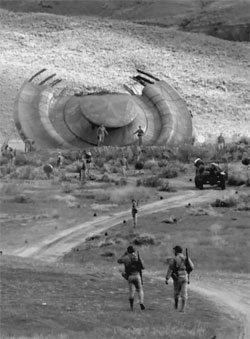 Colonel Philip Corso was an intelligence officer serving at the White House National Security Council under President Eisenhower. After his 21-year-long career, he served as a war analytic. He turned into a public person by breaking silence and confirming that he had personally seen the dead aliens in the Roswell incident.

In the video below, he talks about his first encounter, but also about witnessing a UFO travelling at a speed of 6.500 km/h. He adds that during his career as the head of the Foreign Technology Desk at the U.S. Army’s Research and Development Department, he had access to fragments of alien technologies obtained from different accidents.

Many conspiracy theorists claim that the Roswell incident is some of the most obvious evidence of alien life on Earth that has been cleverly concealed by the American government. Corso gets a lot of credit for this theory.

Corso explains how the deal aliens had a completely different brain than humans. They didn’t have a nose, a mouth, a digestive system, or reproductive organs. They’re more like humanoid beings, he says in the video. “The contents, enclosed in a thick glass container, were submerged in a thick light blue liquid. At first I thought it was a dead child they were shipping somewhere, but this was no child . It was a 4ft human-shaped figure with arms, bizarre-looking four-fingered hands – I didn’t see a thumb – thin legs and feet, and an over-sized incandescent light bulb-shaped head that looked like it was floating over a balloon gondola for a chin.”

According to the colonel, their spaceship was made of durable metals, biological in nature, but nothing humans have witnessed so far.

Corso, now in his 80s, attributes his long silence to fear, but acknowledges that young people in America are entitled to knowing the truth. In his interview, he points out the difference between living in the past and living today. People in the past readily accepted anything the government announced. Today, it’s a different story. In a time where everything changes rapidly, and people are entitled to democracy more than ever, many aspects of society, such as the government, politics and many more, are under public scrutiny. Corso says we must take advantage of this power and create a society which values the truth.

Colonel Philip Corso is the author of The Day After Roswell, a book that elaborates on his role in the secret government program.

The Geometry of Infinite Mind (I)