The Fibonacci Sequence: What Is The Golden Ratio? 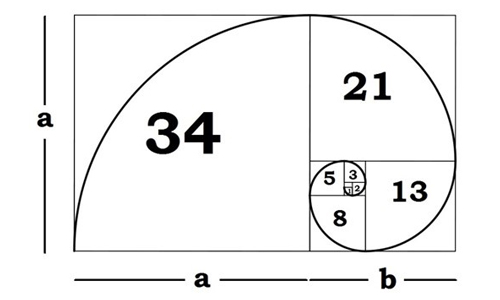 It is often symbolized using φ (phi), after the 21st letter of the Greek alphabet. In an equation form, it looks like this:

As with π (pi – the ratio of the circumference of a circle to its diameter), the digits go on and on, theoretically into infinity. Phi is usually rounded off to 1.618. This number has been discovered and rediscovered many times, which is why it has so many names – the Golden mean, the Golden section, divine proportion, etc. 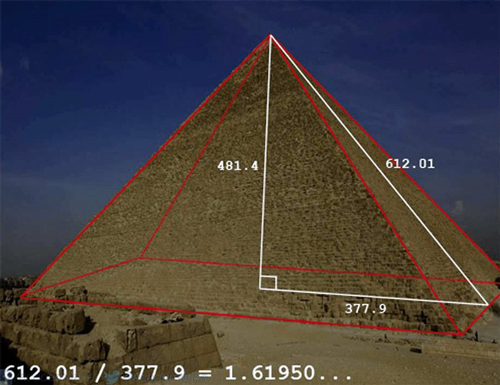 Historically, the number can be seen in the architecture of many ancient creations, like the Great Pyramids and the Parthenon. In the Great Pyramid of Giza, the length of each side of the base is 756 feet with a height of 481 feet. The ratio of the base to the height is roughly 1.5717, which is close to the Golden ratio.

Phidias (500 B.C. – 432 B.C.) was a Greek sculptor and mathematician who is thought to have applied phi to the design of sculptures for the Parthenon.

Around 1200, mathematician Leonardo Fibonacci discovered the unique properties of the Fibonacci sequence.
This sequence ties directly into the Golden ratio because if you take any two successive Fibonacci numbers, their ratio is very close to the Golden ratio. As the numbers get higher, the ratio becomes even closer to 1.618.

These numbers can be applied to the proportions of a rectangle, called the Golden rectangle. This is known as one of the most visually satisfying of all geometric forms – hence, the appearance of the Golden ratio in art.
The Golden rectangle is also related to the Golden spiral, which is created by making adjacent squares of Fibonacci dimensions. 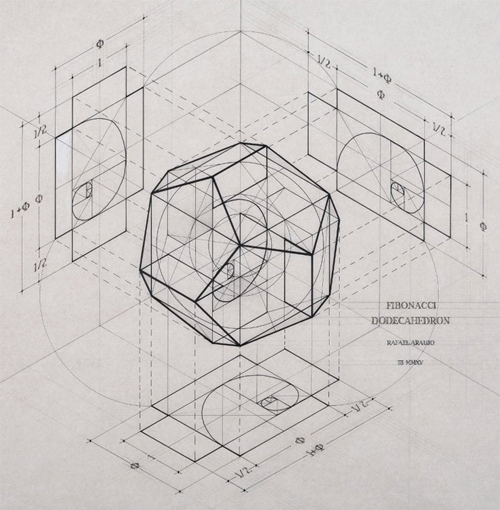 In 1509, Luca Pacioli wrote a book that refers to the number as the “Divine Proportion”, which was illustrated by Leonardo da Vinci. Da Vinci later called this sectio aurea or the Golden section. 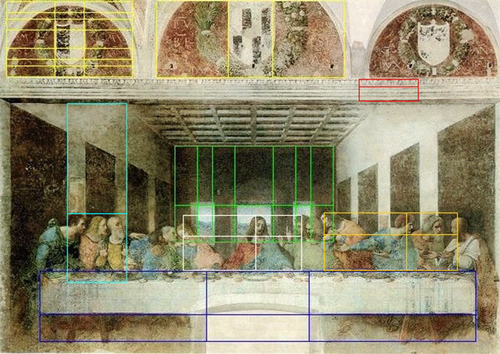 The Golden ratio also appears in da Vinci’s Vitruvian Man and the Mona Lisa. Other artists who employed the Golden ratio include Michelangelo, Raphael, Rembrandt, Seurat, and Salvador Dali. 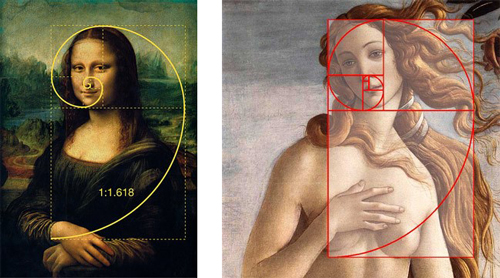 The term “phi” was coined by American mathematician Mark Barr in the 1900s. Phi has continued to appear in mathematics and physics, including the 1970s Penrose Tiles, which allowed surfaces to be tiled in five-fold symmetry.

In the 1980s, phi appeared in quasi crystals, a then-newly discovered form of matter. 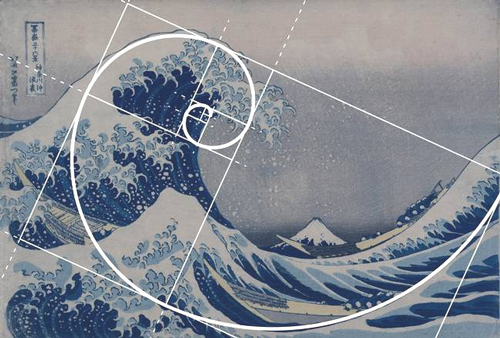 Phi is more than an obscure term found in mathematics and physics. It appears around us in our daily lives, even in our aesthetic views. Studies have shown that when test subjects view random faces, the ones they deem most attractive are those with solid parallels to the Golden ratio. 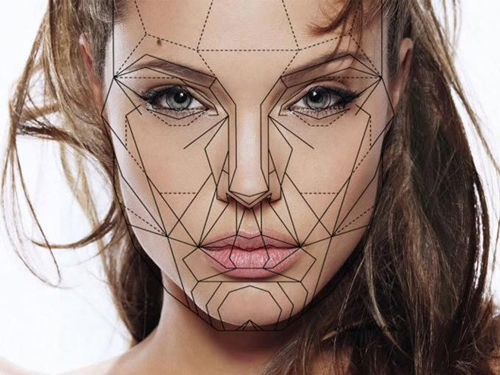 Faces judged as the most attractive show Golden ratio proportions between the width of the face and the width of the eyes, nose, and eyebrows. The test subjects weren’t mathematicians or physicists familiar with phi – they were just average people, and the Golden ratio elicited an instinctual reaction.

The Golden ratio also appears in all forms of nature and science. Some unexpected places include:

Flower petals: The number of petals on some flowers follows the Fibonacci sequence. It is believed that in the Darwinian processes, each petal is placed to allow for the best possible exposure to sunlight and other factors.
Seed heads: The seeds of a flower are often produced at the center and migrate outward to fill the space. For example, sunflowers follow this pattern.
Pinecones: The spiral pattern of the seed pods spiral upward in opposite directions. The number of steps the spirals take tend to match Fibonacci numbers.
Tree branches: The way tree branches form or split is an example of the Fibonacci sequence. Root systems and algae exhibit this formation pattern.
Shells: Many shells, including snail shells and nautilus shells, are perfect examples of the Golden spiral. 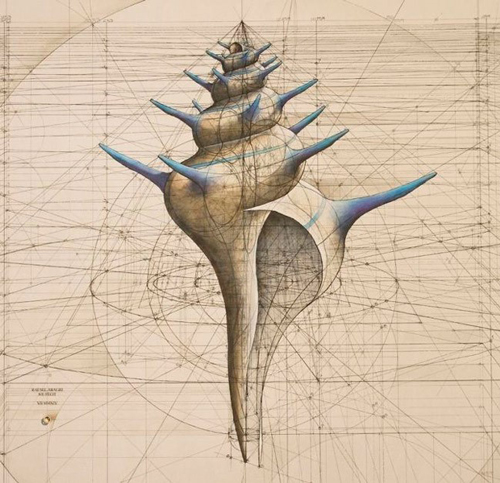 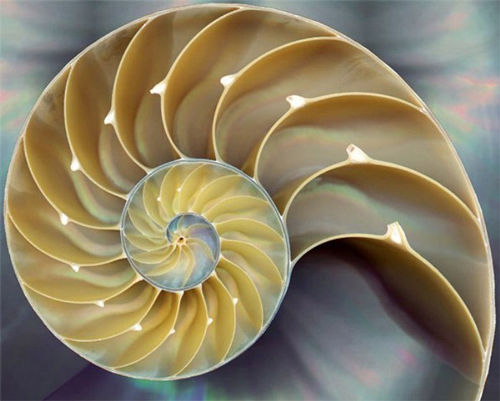 Spiral galaxies: The Milky Way has a number of spiral arms, each of which has a logarithmic spiral of roughly 12 degrees. The shape of the spiral is identical to the Golden spiral, and the Golden rectangle can be drawn over any spiral galaxy. 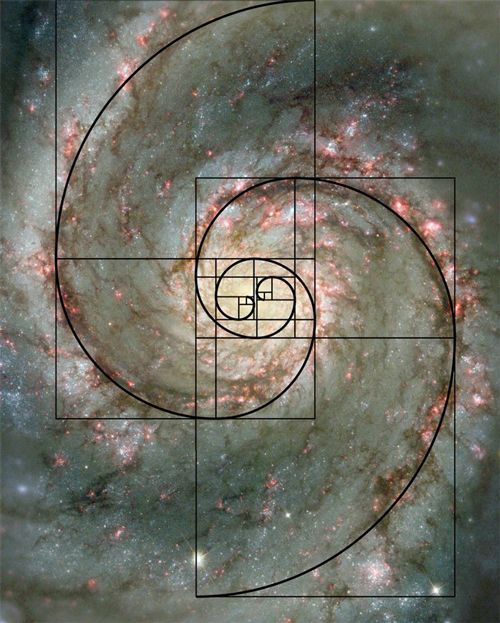 Hurricanes: Much like shells, hurricanes often display the Golden spiral. 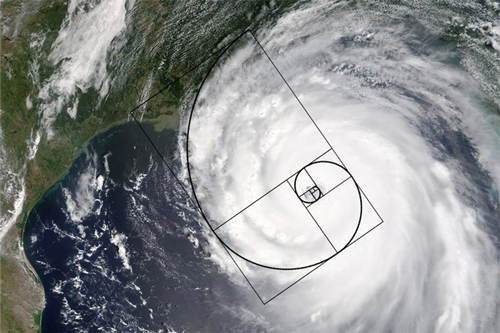 Fingers: The length of our fingers, each section from the tip of the base to the wrist is larger than the preceding one by roughly the ratio of phi. 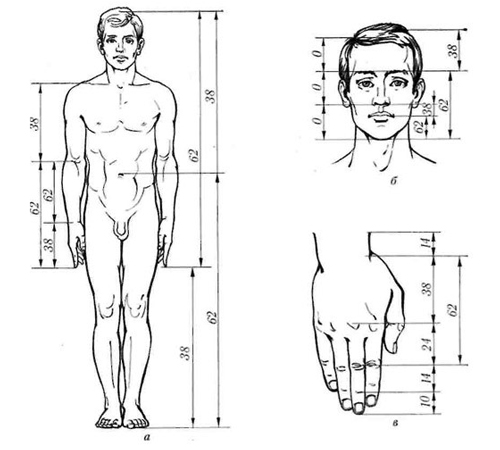 Animal bodies: The measurement of the human navel to the floor and the top of the head to the navel is the Golden ratio. But we are not the only examples of the Golden ratio in the animal kingdom; dolphins, starfish, sand dollars, sea urchins, ants and honeybees also exhibit the proportion.
DNA molecules: A DNA molecule measures 34 angstroms by 21 angstroms at each full cycle of the double helix spiral. In the Fibonacci series, 34 and 21 are successive numbers.

The Fibonacci sequence is possibly the most simple recurrence relation occurring in nature.

The Golden Ratio is best understood geometrically by the golden rectangle. A rectangle unevenly divided resulting into one square and one rectangle, the square’s sides would have the ratio of 1:1, and the new rectangle would be exactly proportionate to the original rectangle – 1:1.618.

This iteration can continue both ways, infinitely. If you plot a quarter circle inside each of the squares as they reiterate, the golden spiral is formed.

The golden spiral is possibly the most simple mathematic pattern that occurs in nature like shells of snails, sea shells, horns, flowers, plants. Numbers are only what we use to organize quantitative information.

The Golden Ratio can be applied to any number of geometric forms including circles, triangles, pyramids, prisms, and polygons.

The golden ratio is formed by thirds within thirds, sixths, the connection between two and three, including every even and odd number itself.

The ratio itself represents the transcendence of numbers, understanding our world is not numbers, but what numbers represent.

Through the spiral, the ratio illustrates how the numbers, all quantities, are quality. Eventually, all quality can be represented through quantity. Properties qualitative and quantitative are just labels of information, our gathered indisputable fact.

Sunflowers have a Golden Spiral seed arrangement. This provides a biological advantage because it maximizes the number of seeds that can be packed into a seed head. If you graph any number system, eventually patterns appear.

In mathematics, numbers and their patterns do not only continue infinitely linear, but in all directions.

Our universe and the numbers not only go on infinitely linear, but even its short segments have infinite points.

The golden ratio is not the only mathematical pattern that reaches infinity, there are many other patterns as well that reach infinity. Knowing this ask yourself, how could infinity occur twice?

If something were to happen infinitely, how could it happen twice? The answer is simple: infinity represents what is eternal, what is truly whole. For example, if infinity were to be used as a variable in mathematics like all other numbers, it would be denoted as 1∞, 2∞, 3∞, 4∞, etc. 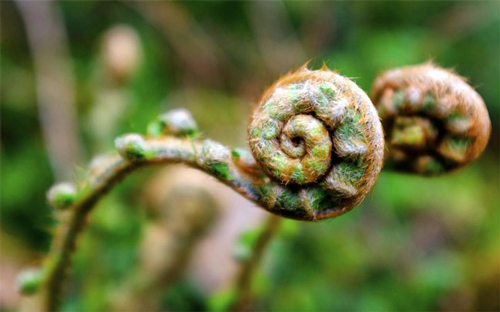 Since the numbers are everywhere, everything is a part of a pattern, reflections of reflections, wheels within wheels. Life itself is a fractal.