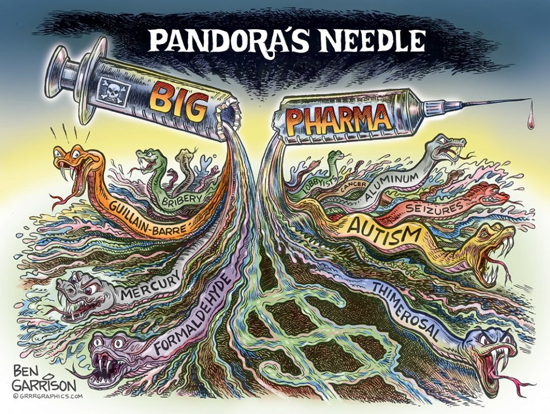 From Kennedy’s video presentation, 7 Minutes on the CDC, Anne Dachel of Age of Autism has transcribed some excerpts. This is explosive material, particularly because there is a chance Kennedy will head up an investigation of vaccine safety under Trump.

Kennedy understands the inherent conflict of interest at the CDC, which operates as a vaccine sales and marketing company, while at the same time posing as a neutral scientific body that assesses vaccine safety – and of course, the CDC presents an ever-expanding schedule of “necessary” vaccines to the American people.

Think of it: the CDC has the power – backed by federal and state governments, and supported by the fake-news media – to buy and sell vaccines, while deciding how many vaccines the population should submit to. What salesman wouldn’t want to work for an outfit like that?

Following are some of Kennedy’s remarks. Read them, study them, and learn the truth:

“The CDC is a very troubled agency, and it’s not just me saying that. There have been four separate, intensive federal investigations by the United States Congress – a three year investigation, 2001, 2002, 2003, by the United States Senate, Tom Coburn’s committee, by the Inspector General of HHS in 2008, by the Office Integrity in 2014. All of them have painted the CDC as a cesspool of corruption, of an agency that has become an absolute subsidiary of the pharmaceutical industry, and that has become a sock puppet, a spokesperson, a shill for the industry.”

“CDC is not an independent agency. It is a vaccine company. CDC owns over twenty vaccine patents. It sells about $4.6 billion of vaccines every year. And its primary metric for success in all the departments in the agency are vaccine sales. The groups, for example the Immunization Safety Office, where the scientists who are supposed to be looking at efficacy and safety in vaccines, they are no longer a public service… agency. They are subsumed in that metric: We have to sell as many of these things as possible. And so they do things to their science to make sure that nothing interferes – no information – interferes with sales.”

“Now there are two divisions of the vaccine branch where we worry about the corruption. The first one is called the Advisory Committee on Immunization Practices. That is the committee that makes the decision about what new vaccines to add to the schedule.
When I was a boy, I got three vaccines. My children got sixty-nine vaccines. It changed in 1989. Why did it change in 1989?

Because in 1986, Congress, [was] drowning in pharmaceutical industry money – pharma puts more money into lobbying than any other industry – pharmaceutical companies have more lobbyists on Capitol Hill than there are Congress people.

Do you think oil and gas has big influence in the Capitol? Well, that’s the next biggest. The pharmaceutical industry puts twice into lobbying, double the amount that the oil and gas, and four times what defense and aero space put in. So they control Congress.”

“In 1986, Congress passed the Vaccine Act, and there were good reasons for them to pass it. At that time vaccine companies were being sued and were threatening to stop making vaccines. [Congress] said ‘Fine, we’re going to insulate them from lawsuits’. They made it illegal to sue a vaccine company in this country, no matter how reckless the behavior, no matter how negligent, no matter how toxic the product, no matter how grievous the injury to the child, you cannot sue.”

What do you think would happen if all of a sudden, all the lawyers disappeared, all the class action suits, all the multi district litigation, all the depositions, all the document searches, the discovery? Just gone. Nobody can sue. You can make anything you want.”

“And then they made it so that it was much easier to get a vaccine on the schedule than it was to get a pharmaceutical into the market. There’s no double blind placebo studies. They’re all fast tracked into the market place.”

“The decision is made by this group, the Advisory Committee on Immunization Practices. And you’d hope that the people who would serve on that committee would be kind of nerdy scientists who are narrowly focused on public health outcomes, but that’s not who they are. The people who serve on that committee, almost all of them, have strong financial ties to the pharmaceutical industry.”

“I’ll give you an example of how this committee works. In 1999, Paul Offit sat on that committee. And when you go to this committee, when you go to their meetings, the Advisory Committee on Immunization Practices is in one room, and then there’s a press deck in the next room. You have a whole bunch of seats there with guys who look like me, in suits. They’re Wall Street analysts, pharmaceutical analysts. They’re waiting to hear the decision. And as soon as they come out and announce which new vaccines they put on the schedule, those guys run out in the hallway and get on their cell phones, and you can watch the stocks spike. So it’s become an economic enterprise.”

“Paul Offit sat on the committee in 1999 that added the rota virus vaccine to the schedule. He owned a patent to a rota virus vaccine. He was then able to sell his vaccine to Merck for $186 million. He pocketed something around $29 million. He’s never allowed anybody to ask him exactly how much, but according to the formula that they use, he would have gotten at least $29 million.”

“That caused a little bit of a scandal in Washington, and the Inspector General of HHS was sent to investigate it. They did a complete investigation of the Advisory Committee on Immunization Practices, and what they found, what they concluded was what he did was not illegal under CDC rules. Sixty-four percent of the people who sat on that committee had conflicts that were similar to Paul Offit, and ninety-seven percent might have conflicts because the rest of them never made out their conflict of interest forms. And nobody ever made them do it.”

“It’s very difficult when those kinds of shenanigans are going on. The American people have faith that all of these new vaccines that were added, beginning in 1989, are put there solely because this committee is concerned with public health.”

This is four years’ worth of university political-science curriculum in seven minutes. Well, the actual title is politicized science. Every American who can read should read it, and also people from all over the world.
This is what is really going on at America’s number-one public health agency, the agency that is also a corporation. This is war against the American people from within.

The Fibonacci Sequence: What Is The Golden Ratio?