The Horror Of The Deep State’s Plan Exposed (4)

In the previous parts of this article the author detailed the decades of propaganda, false flags, and misinformation campaigns used by the Deep State to gain power and control over the U.S. government. 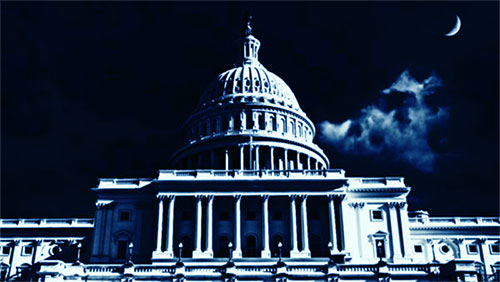 When war or a financial crisis is necessary to keep the profits flowing, events will be steered to such an outcome. With the latest financial plundering operation running out of steam, the Deep State is pushing the world toward global conflict.

If at first you don’t succeed with a false flag gas attack, try again. Knowing a vast swath of the American populace is incapable of critical thinking or able to discern between fake news and factual events, the Deep State and their media lackeys unquestioningly promoted the story of children being killed by sarin gas attack by Assad.

The faux journalists, pretending to be neutral observers, did not question this blatant lie. They did not ponder why Assad would commit such an idiotic atrocity when he was clearly in control of the battlefield and on the verge of defeating his American funded rebel enemies.’ 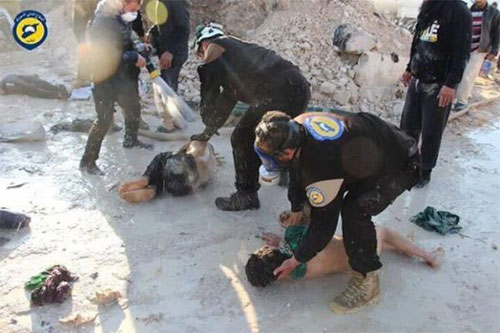 The Deep State masters of manipulation had been flogging the Russiagate story to such a degree, a large portion of the population actually believed Putin hacked the election and got Trump elected. Despite not one iota of proof or evidence, they had successfully used their propaganda mainstream media machine to keep Trump on the ropes. Putin’s unwavering support for Assad and success in defeating the ISIS/Al Qaeda/American rebel forces made the Deep State even more desperate.

With Trump’s domestic agenda stalled, this false flag gas attack offered him the opportunity to look tough and distance himself from Russia. He took the bait and launched the59 missiles into Syria, doing virtually no damage to anything vital to Syria’s war effort. They were launching planes to attack rebels from that base the next day.

The invisible government players achieved victory once again, as it only took three months to turn the non-interventionist candidate into the next war loving president.

The overwhelming cheers from liberal and conservative media outlets were deafening. McCain, Graham, Schumer, Pelosi and all the usual neo-con suspects were ecstatic. Trump’s poll ratings jumped. The majority of the non-thinking public applauded the tough guy act.

It went so well, Trump was convinced by his trigger happy military leadership to use the Mother of All Bombs on some underground tunnels in the middle of Afghanistan. It was all captured on film so it could be played over and over on CNN, Fox, MSNBC, and the rest of Deep State network TV.

The corporate media dutifully provided casualty counts even though they had no way of verifying anything they reported. This was essentially a propaganda film to pump up the spirits of the heavily indebted, iGadget addicted, clueless masses. 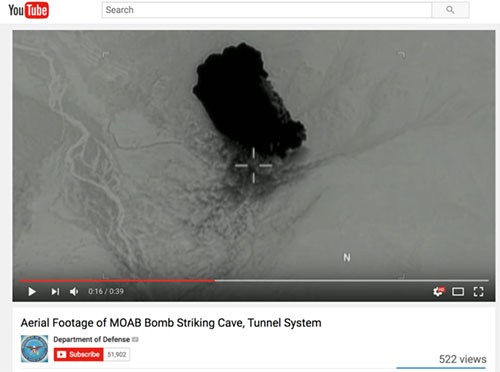 Trump is seeing how easy it is to wage war around the globe, make threatening gestures, order his fleets into attack position, place a $1 billion missile defense system in another country at our cost, and generally act as if he is playing a giant game of Risk, like he did as a rich kid.

Everything looks like a nail when all you have is a hammer. It’s much easier being a foreign interventionist and pleasing the Deep State, than draining the swamp and going to war against the status quo like he promised during the campaign.

Filling your cabinet with status quo insiders is not a recipe for success. His first two military parlays played so well, he decided it was time to teach the crazed midget lunatic in North Korea who’s boss.

Trump ordered carrier groups to sail towards North Korea. He’s been test firing ICBM rockets as a warning. He’s been threatening China unless they do something to get the height challenged dictator under control. The propaganda machine has been trying to strike fear into the hearts of Americans with bullshit storylines about him nuking the U.S.

Kim Jong Un is a certifiable nutjob. He’s been running the third world country as dictator for the last five years. He’s a blustering fool who constantly threatens, with no actions to back up the threats.

Half his missile launches blow up shortly after launch. If he even has a nuke, he has no means of delivering it effectively. The drivel about him hitting the U.S. with a nuke is laughable, but the deceitful neo-cons act as if he could do it.

The mainstream media unquestioningly reports the threat to the western U.S. The Deep State would love to provoke a war with North Korea. They have no concern for the millions of South Koreans who would become the latest collateral damage of the imperialist American Empire.

War means profits. Maybe a clash with the Chinese over the South China Sea islands could be arranged. Placing missiles on the border of Russia and conducting NATO war games certainly isn’t provocative. 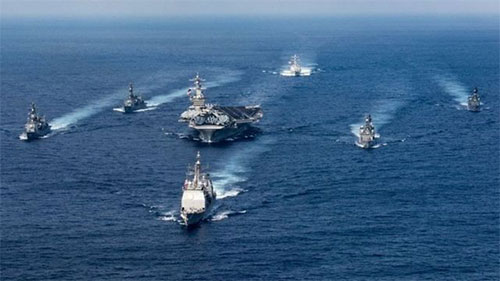 “They were conquerors, and for that you want only brute force–nothing to boast of, when you have it, since your strength is just an accident arising from the weakness of others.” – Joseph Conrad, Heart of Darkness.

The United States is not in danger of being attacked by North Korea, Syria, Iran or a bunch of cave dwellers in Afghanistan. Russia and China are not threatening our vital interests.

We spend more on the military than the next seven countries combined, but the narrative sold to the gullible public is how our military has been gutted and needs hundreds of billions more funding. When the cost of past wars and the surveillance state expenditures are included, the U.S. spends in excess of $1 trillion per year.

We have been an imperial power since World War II and have been intervening in other countries’ affairs since the inception of the Federal Reserve in 1913. Policing the world is expensive for the citizens, but enriching to those doing the policing and supplying the police.

Without a central bank printing press and man-made inflation, American presidents and their Deep State backers couldn’t oppress countries throughout the world with the threat of instantaneous annihilation or invade without a declaration of war – as mandated by the Constitution. 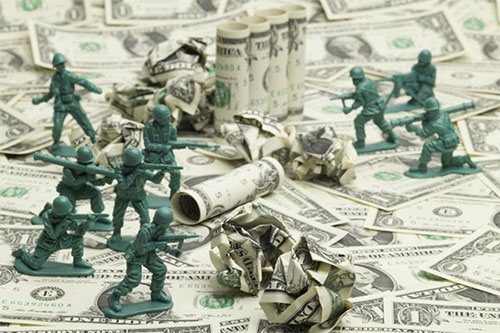 America’s imperial empire may be more technologically advanced and larger than previous empires, but there is nothing special or new about imperialism. The policy of wielding influence and power through the use of military and economic force by empires over smaller weaker countries has been played out through the centuries. Whether it was the Roman, Dutch, Ottoman, or British empires, they all declined and fell due to military overreach, civic decay, and economic decline.

When I step back and try to analyze our current situation, I come to the conclusion our current policies and budget priorities are pure madness. But I feel like the crazy uncle at the family reunion who is shunned and ignored when I bring up the blatantly obvious facts regarding our fiscal situation. 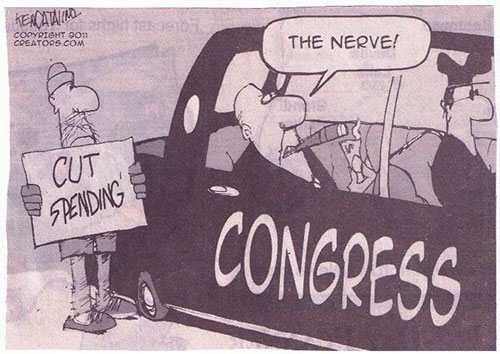 Congress just passed a spending bill extension which cuts nothing and increases military spending. The House just passed an Obamacare replacement bill that won’t cut your premiums or copays, and will keep insurance conglomerates, hospital corporations and corporate drug company cartels in charge of your healthcare.

It is business as usual in the imperialistic capital of Washington DC, and the madness will continue until the teetering empire collapses under the massive weight of debt and overreach.

“As many frustrated Americans who have joined the Tea Party realize, we cannot stand against big government at home while supporting it abroad. We cannot talk about fiscal responsibility while spending trillions on occupying and bullying the rest of the world.

We cannot talk about the budget deficit and spiraling domestic spending without looking at the costs of maintaining an American empire of more than 700 military bases in more than 120 foreign countries.

We cannot pat ourselves on the back for cutting a few thousand dollars from a nature preserve or an inner-city swimming pool at home while turning a blind eye to a Pentagon budget that nearly equals those of the rest of the world combined.” – Ron Paul.

Read the fifth part of this article.