“We are dreaming a symbolic world, only briefly waking to what is real.”
Arthur Deikman, M.D. 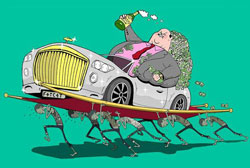 Something is not quite right… you feel it… you may have experienced this feeling, this nagging, for a long time. So you most probably just try to ignore it and hope that it goes away. But sooner or later, the persistent nagging finally brings an idea to your mind – there’s something very odd about the way the world is.
Maybe you feel like you are at the cinema watching a film and yet you sense there must be something wrong about the film you are seeing. The images are all there, but there’s a feeling that something is out of sequence, or the frames are running out of ‘normal’ time. However, after a while you get used to the style of the film, and your senses adjust to its rhythm and you lose the sense of strangeness and you get pulled into the show and you go along with the ride…

The film tells you that the world has no grand meaning, that human life is an accidental anomaly – but as you walk down the street, engage with friends, fall in love, follow your dreams, you experience meaning and significance… wait, there’s that glitch in the film again – something about its ‘randomness’ and ‘meaninglessness’ doesn’t make sense.
Your personal experience has shown you something different… and then there’s that nagging feeling again… somewhere – wasn’t there?

Life is life, and most people go through it with trial, joy, adventure, challenge, love, and all the rest. This is the same for all of us, yet it doesn’t always occur on the same playing field.
There is a different perspective we can take – a different position vis-à-vis the world. We can see the world in which we live as solely an exterior phenomenon; or we can choose to view it as also an expression of our interior life.

Many have come to regard the cosmos as not just the expression of mathematical equations, but as the play of lyrical forces that, like a living being, is full with love and wonder, and the joyful curiosity of adventure. And some often wonder what it would be like to live with the view that human life is the result of random, accidental forces, as a meaningless happening forced to live out its years on the back of a dead rock hurtling through a lifeless universe. 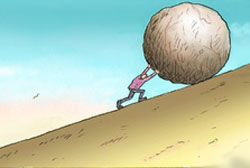 Let’s recall the Myth of Sisyphus, a figure of Greek mythology who was condemned to repeat for eternity the same meaningless task of pushing a boulder up a mountain, only to see it roll down again – and then to push it up again, ad infinitum. This lifeless exterior view of life is truly absurd. And yet the physical demands of a normal life compel us to focus our gaze continually on the external where our daily waking consciousness has to deal with all the impacts and noise coming from the outside – it is very physical work and can, and often does, occupy the whole consciousness and conscious awareness of a person.

Yet for some people another gaze peers out onto the world – a gaze from within. I refer to this as the interior life, whereby a person deeply feels, intuitively knows, that there is another perspective upon life, one that is far richer, pervasive, subtle, and yet one that must be sought with effort.

There are many people – in fact, they may be the majority – who have never sought or felt an urge toward the interior life. They never stop to ask themselves not only “why am I here?”, but also “how did I get here?”.

This is a fundamental question that appears to bother few people. It is not unfair to say that some people only know themselves by the name they wear through life. If pushed, they would find it difficult to truly distinguish themselves from others who bear similar conditioned attitudes and opinions. And yet this realization is often hidden from us.
Perhaps the shock of such recognition would greatly disturb our mental and emotional balance. And so a majority of people continue to identify and individualize themselves through the given name they bear, or the job they have elected to perform.

This is evident on the occasion when someone is asked who they are, they reply either with their name or their occupation. It’s a most unsettling question and for many people they can only answer this by their work function or their given name.

It’s also true that most of the time, this socially accepted question is only asked and directed to a person on the most superficial and banal level. And so who a person actually is, remains a lifelong mystery. And this is a condition common to most of us. 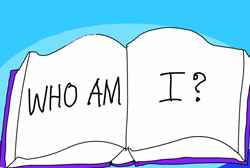 There’s that film again, and it’s telling you that your conscious experience is just a consequence of chemical brain functioning – I do this, I do that, I see this, I feel that, I think this – but the I is just a state of awareness that comes as a by-product from a complex of neurons. But wait a minute – haven’t I just been observing my own thoughts and feelings, standing back from the I? Is this then the real me? Or is this observer of my thoughts just another neuronal by-product observing the workings of another random by-product?… Ah, here’s the film again, the glitch is gone.

It’s also the case that many people rebel against their essential nature, whether they know it or not. People may say a thousand things – or only one thing – and yet in each spoken moment they move away from the essential. Again, what is it to know oneself?
To grow, to develop, to attain understanding and self-awareness – what do these things mean to the everyday person? At best, society has rendered them as abstract concepts, or as wishful thinking. Within our specific cultures we are so used to living at a primary, basic level – a survival level – that we spend very little time and attention upon the interior level. In fact, the notion of an interior world often remains a luxury for the few. The rest of us have to get on with managing and coping with our normal lives.

And so we live with many unrecognized questions, failing to notice them or awake them from their slumber within us. Do we ever wonder why events have turned out this way? Or is it that the forces of division, polarity, and ignorance that drive our world are so convincing that we seek no other reason (or excuse?) for the oddities of our world and its incongruous reality? Perhaps we find no compelling need to want to see things in a different way. In fact, some people actively seek to forget.

The compulsion to forget is likely to be rationalized by calling it by another name. Through the seeking of pleasurable diversions and distractions through entertainment, challenges, or addictive pursuits, people are actually seeking to forget.

Greek mythology tells of how before the human soul incarnates into this world it drinks from Lethe, the river of Forgetfulness – one of the five rivers of the underworld – so that it cannot remember its divine origins.
Similarly, there is a Jewish legend that speaks of how we are struck on the mouth by an angel before birth so that we cannot speak of our pre-birth divine origins. We may come from inspired and sacred origins, yet when we arrive in this earthly reality we come dumbstruck and needy.
Or rather, perhaps it is only that we lack the key, the crucial guide, to unlock our memories and unleash our interior gaze and soulful longing. The truth may be that rather than to forget we are in fact here to remember. 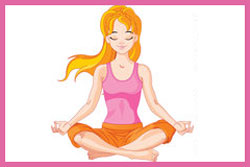 Sometimes it is a tragedy or catastrophe that triggers a person to remember and to seek answers. On a larger scale, perhaps it is necessary for humanity to reach a crisis point – in its materialism, commercialism, and social systems – for there to arise within people the need for something else.

The interior life recognizes that it is the essential nature of being human to seek for something more, something beyond. This need for communion with something greater has largely been fed by the role of religious, and/or spiritual traditions. However, the human being’s need for a meaningful, developmental life has still not been met by our societies, especially so among the highly industrialized cultures. We have developed our faith, our reason, our mental pursuits. We have established industry and created marvellous technologies – yet we have failed to work on ourselves. We have failed to grow our souls.

Soul-making as well as taking care of one’s soul are not specifically introverted or monastic pursuits – they do not require steadfast introspection or a dramatic withdrawal from the world. The Romantic Poet Keats said: “Call the world if you please, «the vale of Soul-making», then you will find out the use of the world.”

“Soul-making” needs to be re-imagined and reintegrated into our societies. We need not go back to animism or alchemy to find soul-making. We can find it here, in the everyday Now. The genuine expression of a truth takes no fixed form. Self-development, or self-refinement if you prefer, is not an ideology or a fixed science. It is a basic human right.

The interior life should be recognized as an inherent human need, and it should be socially acceptable and encouraged to direct part of our gaze in its direction. After all, if the outer sun rises but the inner sun does not, then nothing has been gained.