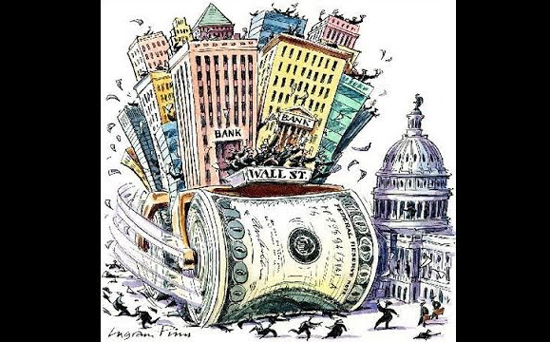 Why We Have Financial Crises

A fundamental concept that lies at the very heart of the present financial model can be found in the way huge parasitic profits on the one hand, and catastrophic systemic losses on the other, are effectively transferred to specific sectors of the economy, throughout the entire system, beyond borders and public control.

As with all models, the one we suffer today has its own internal logic which, once properly understood, makes that model predictable. The people who designed it know full well that it is governed by grand cycles having specific expansion and contraction stages, and specific timelines.

Thus, they can ensure that in bull market times of growth and gigantic profits (i.e., whilst the system, grows and grows, is relatively stable and generates tons of money out of nothing), all profits are privatized making them flow towards specific institutions, economic sectors, shareholders, speculators, CEO and top management and trader bonuses, “investors”, etc. who operate the gears and maintain the whole system properly tuned and working.

However, they also know that – like all roller coaster rides – when you reach the very top, the system turns into a bear market that destabilizes, spins out of control, contracts and irremediably collapses, as happened to Argentina in 2001 and to the better part of the world since 2008, then all losses are socialized by making Governments absorb them through the most varied transference mechanisms that dump these huge losses onto the population at large (whether in the form of generalized inflation, catastrophic hyperinflation, banking collapses, bail-outs, tax hikes, debt defaults, forced nationalizations, extreme austerity measures, etc.).

As we know, all good pyramids have four sides, and since the global financial system is based on a “Ponzi” pyramid scheme, there’s no reason why this particular pyramid should not have four sides as well.
Below is a summary of the four-side global “Ponzi” pyramid scheme that lies at the core of today’s financial model, indicating how these four “sides” function in a coordinated, consistent, and sequential manner.

Side One – Create Public Money Insufficiency. This is achieved, as we explained above, by controlling the national public entity that issues public money. Its goal is to demonetize the real economy so that the latter is forced to seek “alternative funding” for its needs (i.e., so that it has no choice but to resort to private bank loans).

Side Two – Impose Private Banking Fractional Lending Loans. This, as we said, is virtual private money created out of thin air on which bankers charge interest – often at usury levels – thus generating enormous profit for “investors”, creditors and all sorts of entities and individuals who operate as parasites living off other people’s work.

This would never have been the case if each local central bank were to flexibly generate the correct quantity of public money necessary to satisfy the needs of the real economy in each country and region.

Side Three – Promote a Debt-Based Economic System. In fact, the whole pyramid model is based on being able to promote this generalized paradigm that falsely states that what really “moves” the private and public economy is not so much work, creativity, toil and effort of workers, but rather “private investors”, “bank loans” and “credit” – i.e., indebtedness.

With time, this paradigm has replaced the infinitely wiser, sounder, more balanced and solid concept of corporate profit being reinvested and genuine personal savings being the foundation for future prosperity and security. Pretty much the way Henry Ford, Sr. originally grew his most successful company.

Today, however, debt reigns supreme and this paradigm has become entrenched and embedded into people’s minds thanks to the mainstream media and specialized journals and publications, combined with Ivy League universities’ economics departments that have all succeeded in imposing such “politically correct” thinking with respect to financial matters, especially those relating to the proper nature and function of public money.

The facts are that this model generates unnecessary loans so that banking creditors can receive huge profits, which includes promoting uncontrolled, unwarranted and often pathological consumerism, which goes hand in hand with the increasing abandonment of the traditional value of “saving for a rainy day”.

Such debts having political and strategic goals rather than merely financial ones, are usually given a thin layer of “legality” so that they may be imposed by the creditor on the debtor (i.e., in the case of The Merchant of Venice, the bond entered into between Antonio and Shylock giving the latter the legal right to a pound of the former’s flesh; in the case of chronically indebted countries like Argentina, such “legality” is achieved through a complex public debt laundering mechanism carried out by successive formally “democratic” caretaker governments to this very day). 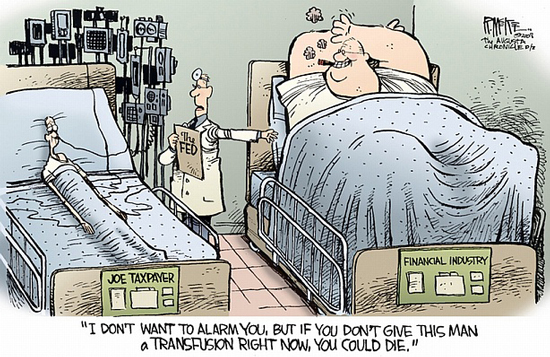 Side Four – Privatization of Profits/Socialization of Losses. Lastly, and knowing full well that, in the long run, the numbers of the entire cycle of this model never add up, and that the whole system will inevitably come crashing down, the model imposes a highly complex and often subtle financial, legal and media engineering that allows privatizing profits and socializing losses.

In Argentina, this cycle has become increasingly visible for those who want to see it, because there the local “Ponzi” pyramid cycle lasts on average 15 to 17 years, i.e., they had successive collapses involving brutal devaluation (1975), hyperinflation (1989) and systemic banking collapse (2001), however in the industrialized world, that cycle was made to last almost 80 years (i.e., three generations spanning from 1929 to 2008).

The fundamental cause of today’s on-going global financial collapse that exerts massive distortions over the real economy – and the ensuing social hardship, suffering and violence – is clear: virtual finance has usurped a pedestal of supremacy over the real economy, which does not legitimately belong to it.

Finance must always be subordinated to, and in the service of, the real economy just as the economy must heed the law and social needs of the political model executed by a sovereign nation-state (as we back-engineer this entire system, we thus understand why it is necessary for the global power elite to first erode the sovereign nation-state and to eventually do away with it altogether, in order to achieve its monetary, financial and political ends).

In fact, if we look at matters in their proper perspective, we will see that most national economies are pretty much intact, in spite of having been badly bruised by the financial collapse.

It is finance that is in the midst of a massive global collapse, as this model of “Ponzi” finance has grown into a sort of malignant “cancerous tumor” that has now “metastasized” threatening to kill the whole economy and social body politic, in just about every country in the world, and certainly in the industrialized countries.
The above comparison of today’s financial system with a malignant tumor is more than a mere metaphor. If we look at the figures, we will immediately be able to see signs of this financial “metastasis”.

For example, The New York Times in their September 22, 2008 edition explains that the main trigger of the financial collapse that had exploded just one week earlier on September 15 was, as we all know, mismanagement and lack of supervision over the “derivatives” market.
The Times then went on to explain that twenty years earlier, in 1988, there was no derivatives market; by 2002 however, derivatives had grown into a global 102 trillion Dollar market (that’s 50% more than the Gross Domestic Product of all the countries in the world, the US, EU, Japan and BRICS nations included), and by September 2008, derivatives had ballooned into a global 531 trillion Dollar market. That’s eight times the GDP of the entire planet!

“Financial metastasis” at its very worst. Since then, some have estimated this derivatives global market figure to be in the region of one-quadrillion Dollars…
Naturally, when that collapse began, the caretaker governments in the US, European Union and elsewhere, immediately sprang into action and implemented “Operation Bail-out” of all the mega-banks, insurance companies, stock exchanges and speculation markets, and their respective operators, controllers and “friends”.

Thus, trillions upon trillions of Dollars, Euros and Pounds were given to Goldman Sachs, Citicorp, Morgan Stanley, AIG, HSBC and other “too big to fail” financial institutions… which is Newspeak for “too powerful to fail”, because they hold politicians, political parties and governments in their steel grip.

All of this was paid with taxpayer dollars or, even worse, with uncontrolled and irresponsible issuance of public money bank notes and treasury bonds, especially by the Federal Reserve bank which has, in practice, technically hyper-inflated the US Dollar: “Quantitative Easing” they call it, which is Newspeak for hyperinflation.
So far, however, like the proverbial naked emperor, nobody dares to state this openly. At least not until some “uncontrolled” event triggers or unmasks what should by now be obvious to all: emperor Dollar is totally and completely naked.

When that happens, we will then see bloody social and civil wars throughout the world, and not just in Greece and Argentina.

By then, however, and as always happens, the powerful bankster clique and their well-paid financial and media operators, will be watching the whole hellish spectacle perched in the safety and comfort of their plush boardrooms atop the skyscrapers of New York, London, Frankfurt, Buenos Aires and Sao Paulo…

Rules of the Illuminati and How They Operate