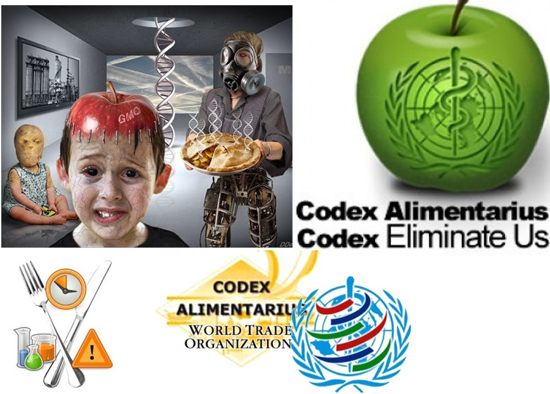 Now, let us look at one example of how Codex Alimentarius has limited our health freedoms, suppressed natural cures, and rewarded pharmaceutical companies with greater control.

The Guidelines for Vitamin and Mineral Food Supplements were adopted by the Codex Alimentarius Commission as a new global standard at its meeting in Rome, Italy, in July 2005. Drafted using the European Union’s restrictive Food Supplements Directive as a blueprint, the Guidelines mandate the setting of restrictive upper limits on the dosages of vitamins and minerals, and the prohibiting of claims that vitamin and mineral supplements are suitable for use in the prevention, alleviation, treatment or cure of disease.

Additionally, Codex Alimentarius has lowered the standards set for organic foods, severely restricted the health claims that both vitamin supplement and food manufacturers can make, paving the way for the approval of genetically modified foods, and approving many food additives, chemicals, and pesticides of particular concern. Many argue that it has led to selective prosecution of natural product companies while looking the other way when it comes to pharmaceutical companies and they claim they make, the dangers they pose, and the legal immunities they enjoy.

Much of the research material in this chapter was originally performed by David Wilcock and was included in his free e-book entitled Financial Tyranny: Defeating the Greatest Cover-Up of All Time.

How Are Medicinal Drugs Made?

On May 25, 2011, the Huffington Post ran an expose entitled The Horrifying Hidden Story Behind Drug Company Profits, stating in it:
“Our governments have chosen, over decades, to allow a strange system for developing medicines to build up. Most of the work carried out by scientists to bring a drug to your local pharmacist – and into your lungs, or stomach, or bowels – is done in government-funded university labs, paid for by your taxes. Drug companies usually come in late in the process of development, and pay for part of the expensive but largely uncreative final stages, like buying some of the chemicals and trials that are needed. In return, they own the exclusive rights to manufacture and profit from the resulting medicine for years. Nobody else can make it.”

The article goes on to describe how only 14% of the budgets of pharmaceutical companies goes into development and the rest goes to marketing and profits:
“But a detailed study by Dr. Marcia Angell, the former editor of the prestigious New England Journal of Medicine, says that only 14 percent of their budgets go on developing drugs – usually at the uncreative final part of the drug-trail. The rest goes on marketing and profits. And even with that puny 14 percent, drug companies squander a fortune developing ‘me-too’ drugs – medicines that do exactly the same job as a drug that already exists, but has one molecule different, so they can take out a new patent, and receive another avalanche of profits.
As a result, the US Government Accountability Office says that far from being a font of innovation, the drug market has become ‘stagnant’. They spend virtually nothing on the diseases that kill the most human beings, like malaria, because the victims are poor, so there’s hardly any profit to be sucked out.”

According to the article, the pharmaceutical companies have effectively bought the government regulators and written their own regulations themselves:
“Why would we keep this system, if it is so bad? The drug companies have spent more than $3 billion on lobbyists and political ‘contributions’ over the past decade in the US alone. They have paid politicians to make the system work in their interests. If you doubt how deeply this influence goes, listen to a Republican congressman, Walter Burton, who admitted of the last big health care legislation passed in the US in 2003: ‘The pharmaceutical lobbyists wrote the bill’.”

Healthcare is the Most Profitable Industry in the World 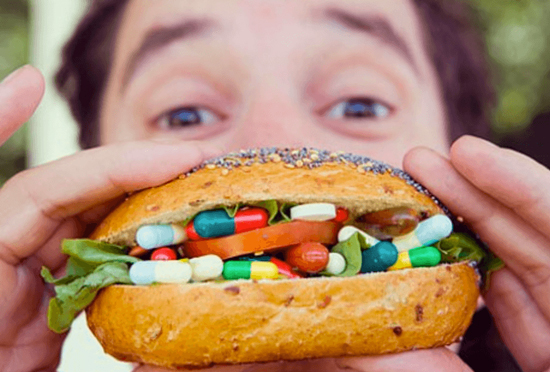 According to Wikipedia, “The Fortune 500 is an annual list compiled and published by Fortune magazine that ranks 500 of the largest United States corporations by total revenue for their respective fiscal years”.

According to the 2008 list, the most profitable industry to be in is Network and Other Communications Equipment, earning a 20.4 percent profit margin. The second most profitable is Internet Services and Retailing, at 19.4 percent.
The third most profitable is pharmaceuticals at a 19.3 percent margin. However, this is very misleading because the healthcare system is divided into seven different categories on the Fortune 500 list. They are listed as follows:
“Pharmaceuticals – 19.3%. Medical Products and Equipment – 16.3%. Insurance: Life, Health (stock) – 4.6%. Health Care: Pharmacy and Other Services – 3.0%. Health Care: Medical Facilities – 2.4%. Health Care: Insurance and Managed Care – 2.2%. Wholesalers: Health Care – 1.3%.”

Of the 43 industries on the Fortune 500 list that actually generated profits in 2008, seven of them belong to the healthcare industry.
The healthcare industry as a whole accounts for 16.28% of all the profitable industries on the Fortune 500 list. Healthcare and pharmaceuticals together is the largest and most profitable sector to be in. The only industry that comes close is oil and energy, as we will now see. As we go over the following data, bear in mind that in almost all cases pharmaceutical drugs are derived from oil, coal, and shale. Also bear in mind that there is a fair amount of cross-ownership between pharmaceutical companies and oil companies.

Just to recap, nine out of all 50 of the top Fortune 500 companies are pharmaceuticals. These companies alone pulled in almost 65 billion dollars in profits for 2010, close behind the 70 billion made in oil money.

Oil/Energy is the Second Most Profitable Industry in the World

Following the same formula of consolidating the various categories that comprise the same industry, we can see that the second most profitable American industry is the petroleum and energy industry which accounts for six out of 43 spots. The 6 categories are: “Mining, Crude Oil production – 11.5 percent. Oil and Gas Equipment, Services – 10.2 percent. Utilities: Gas and Electric – 8.7 percent. Petroleum Refining –2.1 percent. Pipelines – 1.5 percent. Energy – 0.9 percent”.

The oil industry as a whole accounts for 13.95% of all the most profitable categories of American businesses in 2008.
Combining both the pharmaceutical and oil industries amounts to 13 out of 43 categories of the Fortune 500 list. That means 30.23% or almost 1/3 of the profits in the United States were made by the oil and pharmaceutical companies.

Oil Companies are the Most Profitable Individual Businesses

So far, we have mostly been looking broadly at the profitability of disparate industries. This assessment is helpful in determining a broad view of which industries stand the best chance of making windfall profits, but it does not help us understand exactly how much money they are pulling making. To do this, we will now assess the profits of individual companies.

From the 2010 Fortune 500 list, we can determine specifically what the profits are of the top 50 companies in the United States.
The single most profitable American corporation in 2010 was Exxon Mobil, earning 30 billion, 460 million dollars. This company is part of the Rockefeller family dynasty. Chevron ranks third (behind AT&T) at 19 billion, 24 million dollars. ConocoPhillips was #16 at 11 billion, 358 million. Both Chevron and CoconoPhillips were successors of Standard Oil when it was broken up as a monopoly, meaning both Chevron’s and CoconoPhillips’ profits also trickle up to the Rockefeller family dynasty. Devon Energy and Occidental Petroleum both made 4.5 billion.
All together, these five companies made 69 billion, 842 million dollars in oil profits in 2010 alone. This list does not include any oil companies that were founded outside of America.

Banking and Oil Comprise 75% of the Global Market 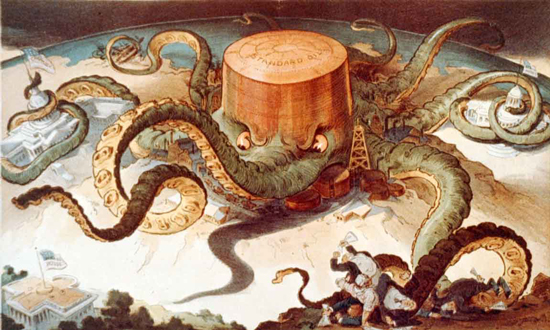 When you continue with this train of thought and investigate the most profitable companies on an international level, oil companies such as BP, Royal Dutch Shell, and Total S.A. are themselves topping the charts. The international equivalent of the Forbes 500 list is called the Forbes Global 2000. This list provides us with a more comprehensive analysis of the global market, but only lists companies whose profits are made publicly available.

Of the top 20 largest international companies, eight are banks: JP Morgan Chase, HSBC (UK), ICBC (China), Citigroup, BNP Paribas (France), Wells Fargo, Banco Santander (Spain) and China Construction Bank. They amount to 40 percent of the international market.
Seven of the top 20 public international companies are oil and gas: Exxon Mobil, Royal Dutch Shell, Petro China, Petrobras, Gazprom, Chevron and Total. That’s 35 percent.
Together, a total 15 out of the top 20 companies on the Forbes 2000 list are either banking or oil, comprising 75% of the global market. That leaves only five slots left in the top 20.

Breaking up the Standard Oil Monopoly Did Not Affect its Profits

Standard Oil Company of New Jersey had a virtual monopoly on producing, transporting, refining and marketing oil up until 1911, when the United States Supreme Court passed the antitrust legislation which forced the monopoly to partition into 34 separate companies. However, these companies continued to grow into some of the largest companies on the planet and remain so to this day.
Standard Oil of New Jersey became Esso, later to be renamed Exxon – which became a key part of ExxonMobil, currently the most profitable company in the world – earning 30 billion, 460 million dollars.

Unsurprisingly, with all of this money and power, Rockefeller and the other financial elite of that time colluded to commandeer the government of the United States through the implementation of a central bank. This central bank would come to be known as the Federal Reserve and was a private company that was granted a monopoly on the printing and regulation of the official currency of the nation. Although the Federal Reserve’s founders met in secrecy, we now know who its owners are.

According to Global Research, “J. W. McCallister, an oil industry insider with House of Saud connections, wrote in The Grim Reaper that information he acquired from Saudi bankers cited 80% ownership of the New York Federal Reserve Bank – by far the most powerful Fed branch – by just eight families, four of which reside in the US. They are the Goldman Sachs, Rockefellers, Lehmans and Kuhn Loebs of New York; the Rothschilds of Paris and London; the Warburgs of Hamburg; the Lazards of Paris; and the Israel Moses Seifs of Rome.

Schauf lists William Rockefeller, Paul Warburg, Jacob Schiff and James Stillman as individuals who own large shares of the Fed. The Schiffs are insiders at Kuhn Loeb. The Stillmans are Citigroup insiders, who married into the Rockefeller clan at the turn of the century.

Eustace Mullins came to the same conclusions in his book The Secrets of the Federal Reserve, in which he displays charts connecting the Fed and its member banks to the families of Rothschild, Warburg, Rockefeller and the others.
The control that these banking families exert over the global economy cannot be overstated and is quite intentionally shrouded in secrecy. Their corporate media arm is quick to discredit any information exposing this private central banking cartel as ‘conspiracy theory’. Yet the facts remain.”