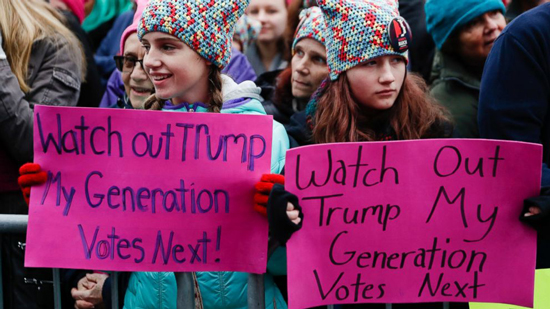 Many Americans watched the bizarre anti-Trump “women’s march” events and wildly dishonest media coverage in January with a sense of amusement. What’s remarkable about everything being voiced by the unhinged left is that none of it has any basis in fact or reason.

The “war on women” doesn’t exist. The “KKK influence” that CNN claimed has taken over the White House is an absolute hoax. The “Russian takeover” of the U.S. government that has been ridiculously claimed by the Washington Post was complete fiction. On one issue after another, every fear whipped up by the insane left turns out to be nothing more than sheer delusion.

So why are they so angry all the time? And why are blabbering idiots like Ashley Judd and Madonna so convinced that a Trump administration means an end to their twisted universe?

The answer is incredibly simple: the lying media keeps pushing fake news as a form of “journo-terrorism” that’s deliberately designed to enrage liberal America and gin up a nationwide delusional psychosis that translates into hate against Donald Trump. (That’s the real “tolerance” of the left on display… it’s actually rooted in racism, bigotry and deep-rooted intolerance of everything from religion to masculinity to people with white skin.)

It’s not just a series of simple “fake news” hoaxes, either — such as the fake Time story that ridiculously claimed Donald Trump had removed the bust of Martin Luther King Jr. from the White House — it’s actually an orchestrated campaign of malicious anti-Trump propaganda that’s being engineered and broadcast for the purpose of destroying the Trump administration and overthrowing America.

The communist left does not respect law, order, democracy or the US Republic

Ever since the commie left (which runs the media) failed to install its totalitarian globalist (Hillary Clinton) into office, it has been on a quest to destroy democracy, crush the Republic and foment a popular uprising that leads to mass violence. This malicious, shared goal across CNN, Washington Post, NYT, Huffington Post and other shameless, anti-American media presstitutes is “journo-terrorism”. It is a psychological weapon of mass destruction that’s being deployed against the minds of the American people on an hourly basis. It is a kind of “mental bombardment” being waged as an act of psychological warfare across the social landscape of America.

In effect, CNN, MSNBC and the entire left-wing media apparatus is psychologically carpet bombing the psyche of America with orchestrated lies, disinfo and propaganda designed to overthrow the legitimate government (the Trump administration, currently). It’s much more than mere “fake news,” you see: it’s a full-blown theater of war against the human psyche.

Here are just a few of the journo-terrorism “bombs” being deployed against the minds of the American people on a daily basis:

1) The imagined war on women. There is no such war. The Trump administration honors and celebrates women. His campaign victory, in fact, was led by a woman. It is the Clintons who abuse, rape, threaten and intimidate women, yet somehow Bill Clinton remains celebrated by the left.
Do any of the women in the vulgarity-named “pussyhat march” realize they are, in effect, marching in support of the accused rapist and sexual predator known as Bill Clinton?

2) The imagined climate change apocalypse. Climate change was a massive hoax… a quack science con dreamed up by Al Gore and the left-wing globalists to engage in a whole new global con of wealth extraction from a compliant population of green-dreamy people. (Mr. Ponzi would have been proud.) The Trump administration has wiped White House clean of all the climate change hoax quackery.

3) The imagined war on minorities. There is no war on minorities. Trump’s plan might even free minorities from the trap of government dependence and help them find rewarding employment that gives them new freedom and opportunity. Liberals want African-Americans to be slaves of their nanny state, not free men and women who can cast off the burden of subservience. Want more proof? Eight years after a black man was elected President of the United States, blacks in America are no better off than they were in 2007. 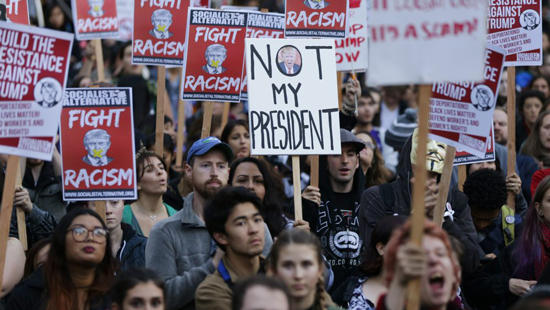 4) The imagined war against gays and transgenders. There is no Trump war against anyone in the LGBT community. Gay marriage is the law of the land and will remain unchallenged by the Trump administration. Trump isn’t anti-gay by any stretch. On social issues, he’s actually quite liberal. Gays and lesbians are welcomed in Trump’s America as much as anyone else. Anyone who thinks Trump is anti-gay has been tricked by the lying fake news media into suffering from “gaylusional paranoia”.

5) The imagined Russian takeover of the U.S. government. The entire Russian conspiracy whitewash was nothing more than a ridiculous ploy to distract the nation from the content of the damning Jon Podesta emails leaked by WikiLeaks. Those emails expose a massive criminal cabal and deep culture of corruption inside the Democratic Party (run by liberty-hating elitists and unethical corruption bosses). The entire Russian conspiracy fiction was invoked out of thin air to change the subject and prevent any real scrutiny of the WikiLeaks email dumps.

6) The imagined war on the poor. There is no war on the US poor by Republicans. In reality, the real war on the poor is committed by Democrats who are led by a wealthy, arrogant elite that’s totally disconnected from the working men and women of America. While Trump is also wealthy, he got there through hard work, not living as a government parasite or accumulating cash by selling influence (i.e. the Clinton Crime Foundation). By reducing the cost burden of Obamacare, Trump wants to incentivize employers to expand their operations, add new jobs and employ an ever-increasing number of new workers. The best way to lift people out of poverty is to create opportunities for employment and growth, not to trap people in an endless cycle of government handouts and unearned entitlements.

7) The imagined KKK invasion. If you watch the unhinged left-wing media, you’ll see numerous reports on “KKK attacks” against the homes or churches of African-Americans. What that same media never reports is that most of these so-called “hate crimes” turn out to be hoaxes carried out by the victims themselves. The number of actual white-on-black hate crimes in America is exceedingly small. There are a far greater number of hate crime hoaxes than legitimate hate crimes. At the same time, black professors in universities across America are literally teaching black-on-white hatred and intolerance, deliberately engineering reverse racism across the country while calling it “social justice warrior” training. So yes, there is racism in America: it’s being taught all across the public education system, and it’s rooted in hatred and intolerance directed at fair-skinned people who are judged by the color of their skin. According to Martin Luther King, Jr., that’s the very definition of racism!

To get a taste of the kind of delusional paranoia infecting the minds of misinformed African-Americans, check out this quote from an article in Grabien news: “Another candidate said black Americans are now living with justified fear of being killed after Donald Trump was elected president.
Raymond Buckley, the chairman for the New Hampshire Democratic Party, told a story about how, in the midst of grieving on Election Day, he received a call from his black niece, who feared for her life after Trump’s victory.”

Black people have been literally brainwashed into thinking President Trump is going to unleash genocidal death squads across the inner cities. However, the real people murdering black people are almost universally other black people (remember Chicago). All patriotic black folks across America should be happy Trump is working to halt the inner city violence and support universal concealed carry rights so that honest black Americans can defend their families and property against the lawless gang bangers, rioters and violent protesters that Obama let run loose across the country.

8) The imagined “intolerance” epidemic. Any rational observation of bigotry and intolerance in America today would have to conclude it’s the political left that’s steeped in bigotry and intolerance. While white people voted for Obama in record numbers and put the first black man into the White House, somehow they’re never “tolerant” enough, according to the bigots on the left. The full bigotry of liberalism is on full display as Sen. Jeff Sessions (for example) is falsely labeled a black hater just because of his southern dialect.

African-Americans in the Trump administration are openly called “mediocre negroes” by the bigoted left, and the entire radicalization of the violent, unhinged left has demonstrated that when they don’t get their way, they resort to mass violence, screaming and crybully tactics. There is an epidemic of intolerance in America… and it’s found squarely on the political left. 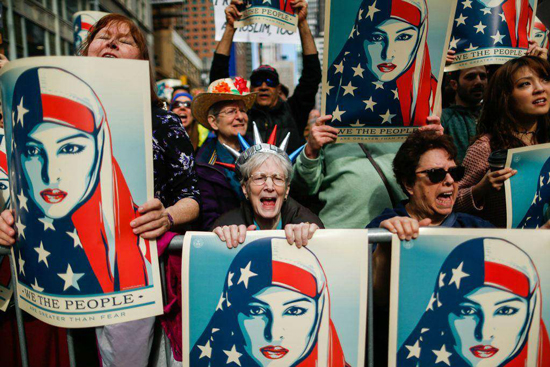 9) The imagined war on Muslims. According to the unhinged left, Trump had declared war on all Muslims just because he’s stated his intention to destroy ISIS, an international terrorism group. The political left in America is so mentally ill that they actually want to welcome terrorists into America… and even apologize for their acts of domestic terrorism by saying they were “driven to such acts” by intolerance. (This is indeed how sick and demented the narratives of the left have become.)

President Trump said that while US welcomes law-abiding immigrants from all religious backgrounds, including Muslims, Americans must practice extreme vetting of would-be immigrants from extremist regions of the world where certain fringe factions are recruiting, training and dispatching “sleeper cell” terrorists to attack America. Wanting to protect America from ISIS terrorism does not make someone a hater of the Muslim religion. The religious of Islam is not a threat to America… it’s only terrorists who invoke Islam (or any religion, for that matter) who are the real threat. The “religion” (actually more like a cult) of Communism is actually a greatest threat to America.

10) The imagined war on Mexicans. When Donald Trump said, as a candidate, that some illegal aliens were committing violent crimes in America – including rapes and murders – he was correct. It’s not a matter of debate or opinion: illegal aliens are routinely arrested for committing violent crimes after being deported multiple times. Yet the wholly dishonest left-wing media deliberately altered Trump’s quote out of context and falsely claimed that he was labeling all Mexicans as “rapists and murderers”.

Donald Trump is going to employ tens of thousands of Mexicans to help build the wall! Once that’s done, their skills will be needed elsewhere to rebuild America’s infrastructure and manufacturing base. America welcomes Mexicans who are willing to follow the law and enter the country legally.