The Truth Behind the Khan Sheikhoun Chemical Attack Revealed 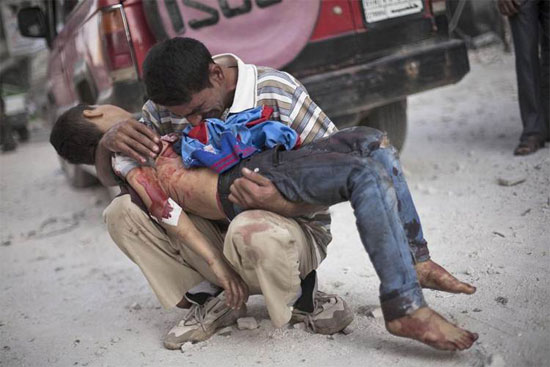 Syrian Deputy Foreign and Expatriates Minister Faisal Mekdad confirmed that the Syrian government provided the Organization for the Prohibition of Chemical Weapons and the United Nations Security Council with necessary documentation and reports which prove that the chemicals, used in the gas attack on Khan Sheikhoun in Idleb province, were in fact stored and possessed by the terrorist groups, operating in the area.

Mekdad said that the media reports, surrounding the events, were used as a tool of distortion and falsification of facts, noting that Syria has fulfilled all obligations to the Organization for the Prohibition of Chemical Weapons, with the latter already verifying this.

He also denied that Syrian Army is in possession of chemical weapons, by saying: “The army has never used such weapons, even in the most intense and critical battles with the terrorist groupsˮ, while also reminding Staffan de Mistura, UN’s Special Envoy to Syria, to act in accordance with his role and neutrally approach the situation.

Mekdad also stressed that Syria strongly condemns the attacks on Khan Sheikhoun, yesterday carried out by armed terrorist groups and their supporters, operating in the area and called on the international community to hold the parties, responsible for the crime, accountable. He also expressed concerns that Wednesday’s conference on the Syrian issue in Brussels could be used as a tool to spread blatant lies and accusations against Syria.

The Deputy Foreign and Expatriates Minister further stated that the area where the incident occurred is under complete control of the terrorist groups and that the attacks are obviously their work and that of their aides and supporters, located in Britain, France, Turkey and Saudi Arabia, pointing out that the so-called “Syrian opposition” which itself refused to play its part in restoring peace and stability to Syria, is now trying to put pressure on the Syrian government by making such provocations.

This spring reports came about a chemical weapons attack in the Syrian village of Khan Sheikhoun, located in Syria’s Idleb province. Almost 60 people, many of them children, were said to have been killed by the poisonous substances that were dropped during air raids on the village. Despite no evidence and the fact that no raids were conducted on Khan Sheikhoun, the Islamist and corporate press accused the Syrian and Russian side to be behind the incident. The two have since denied and debunked the accusations.