Environmental modification techniques (ENMOD) for military use constitute, in the present context of global warfare, the ultimate weapon of mass destruction.

Rarely acknowledged in the debate on global climate change, the world’s weather can now be modified as part of a new generation of sophisticated electromagnetic weapons. Both the US and Russia have developed capabilities to manipulate the climate for military use. 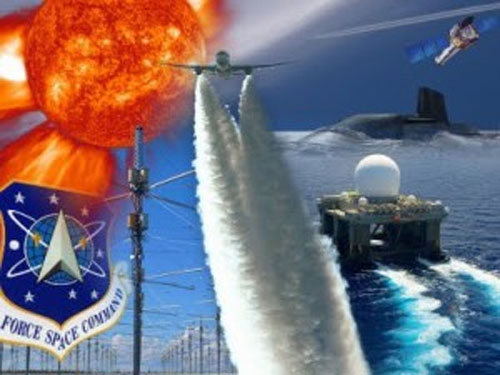 Environmental modification techniques have been applied by the US military for more than half a century. US mathematician John von Neumann, in liaison with the US Department of Defense, started his research on weather modification in the late 1940s at the height of the Cold War and foresaw “forms of climatic warfare as yet unimagined”.

During the Vietnam War, cloud-seeding techniques were used, starting in 1967 under Project Popeye, the objective of which was to prolong the monsoon season and block enemy supply routes along the Ho Chi Minh Trail.
The US military has developed advanced capabilities that enable it selectively to alter weather patterns. The technology, which was initially developed in the 1990s under the High-frequency Active Auroral Research Program (HAARP), was an appendage of the Strategic Defense Initiative – ‘Star Wars’.

From a military standpoint, HAARP – which was officially abolished in 2014 – is a weapon of mass destruction, operating from the outer atmosphere and capable of destabilising agricultural and ecological systems around the world.

Officially, the HAARP program has been closed down at its location in Alaska. The technology of weather modification shrouded in secrecy, nonetheless prevails.
Weather-modification, according to the US Air Force document AF 2025 Final Report, “offers the war fighter a wide range of possible options to defeat or coerce an adversary”, capabilities, it says, extend to the triggering of floods, hurricanes, droughts and earthquakes: “Weather modification will become a part of domestic and international security and could be done unilaterally… It could have offensive and defensive applications and even be used for deterrence purposes. The ability to generate precipitation, fog and storms on earth or to modify space weather… and the production of artificial weather all are a part of an integrated set of [military] technologies.”

In 1977, an international Convention was ratified by the UN General Assembly which banned “military or other hostile use of environmental modification techniques has widespread, long-lasting or severe effects”.
“The term ‘environmental modification techniques’ refers to any technique for changing – through the deliberate manipulation of natural processes – the dynamics, composition or structure of the Earth, including its biota, lithosphere, hydrosphere and atmosphere, or of outer space.” (Convention on the Prohibition of Military or Any Other Hostile Use of Environmental Modification Techniques, United Nations, Geneva: 18 of May, 1977)

While the substance of the 1977 Convention was reasserted in the UN Framework Convention on Climate Change (UNFCCC) signed at the 1992 Earth Summit in Rio, debate on whether modification for military use has become a scientific taboo.
Military analysts and scientists are mute on the subject. Meteorologists are not investigating the matter and environmentalists are largely focusing on greenhouse gas emissions under the Kyoto Protocol.

The possibility of climatic or environmental manipulations as part of a military and intelligence agenda, while tacitly acknowledged, is not part of the broader debate on climate change under UN auspices.
While discussion of the post-Cold War military applications of weather warfare is a taboo, the US Air Force has nonetheless acknowledged the strategic importance of ENMOD techniques in the modern battlefield of non-conventional warfare and intel ops, including the conduct, without the enemy’s knowledge, of “covert” weather modification operations.

While the US Force acknowledges that ENMOD weapons are part of military arsenal, there is no formal proof or evidence that ENMOD techniques have been used by US military against a foreign country or enemy of the US.

At this juncture in our history, US-NATO forces are deployed worldwide.
The US and its allies are waging war on Syria and Iraq and targeting Iran and North Korea. They are also threatening Russia and China.
The Pentagon has formulated the contours of a global military agenda, a “long war”, a war without borders.

“Weather warfare” is the ultimate WMD (weapon of mass destruction) with the potential of destabilizing an enemy’s ecosystem, destroying its agriculture, disabling communications networks.
In other words, ENMOD techniques can undermine an entire national economy, impoverish millions of people and “kill a nation” without the deployment of troops and military hardware. 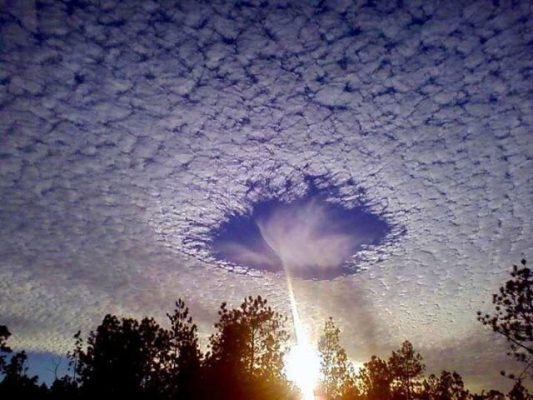 The article you are now reading, with the exception of some small edits, was first published in September 2004. The 2004 article was a follow-up on an earlier study by the author entitled Washington’s New World Order Weapons Have the Ability to Trigger ClimateChange, Third World Resurgence, January 2001.

While The Ecologist published in 2007 a shorter version of the above study, the issue of climatic manipulation for military use has largely been ignored by Environmentalists.

This article is dedicated to the memory of Dr. Rosalie Bertell, who, from the very outset revealed the diabolical nature of the HAARP project, as part of an integrated non-conventional weapons program:
“It is related to fifty years of intensive and increasingly destructive programs to understand and control the upper atmosphere. …
HAARP is an integral part of a long history of space research and development of a deliberate military nature. The military implication of combining these projects is alarming.
The ability of the HAARP / Spacelab / rocket combination to deliver very large amounts of energy, comparable to a nuclear bomb, anywhere on earth via laser and particle beams, are frightening. The project is likely to be “sold” to the public as a space shield against incoming weapons, or, for the more gullible, a device for repairing the ozone layer.”

It is my sincere hope that this article will renew the debate on the dangers of weather warfare and will contribute to the broader objective of World peace which requires the relentless disarming of the US-NATO military apparatus.
Officially, the HAARP program has been closed down at its location in Alaska. The technology of weather modification shrouded in secrecy, nonetheless, prevails.

The significant expansion in America’s weather warfare arsenal, which is a priority of the Department of Defense is not a matter for debate or discussion.
While, environmentalists blame the Bush administration for not having signed the Kyoto Protocol, the issue of “weather warfare”, namely the manipulation of weather patterns for military use is never mentioned.

The US Air Force has the capability of manipulating climate either for testing purposes or for outright military-intelligence use.
These capabilities extend to the triggering of floods, hurricanes, droughts and earthquakes. In recent years, large amounts of money have been allocated by the US Department of Defense to further developing and perfecting these capabilities:

“Weather modification will become a part of domestic and international security and could be done unilaterally… It could have offensive and defensive applications and even be used for deterrence purposes.
The ability to generate precipitation, fog, and storms on earth or to modify space weather, … and the production of artificial weather all are a part of an integrated set of technologies which can provide substantial increase in US, or degraded capability in an adversary, to achieve global awareness, reach, and power.” – (US Air Force, AF 2025 Final Report).

While there is no firm evidence that the US Air Force weather warfare facilities have been deliberately applied to modify weather patterns, one would expect that if these capabilities are being developed for military use, they would at least be the object of routine testing, much in the same way as the testing of new conventional and strategic weapons systems.

Needless to say, the subject matter is a scientific taboo. The possibility of climatic or environmental manipulations as part of a military and intelligence agenda, while tacitly acknowledged, is never considered as relevant.

Military analysts are mute on the subject. Meteorologists are not investigating the matter, and environmentalists are strung on global warming and the Kyoto Protocol.

The Pentagon document constitutes a convenient cover-up. Not a word is mentioned about its main weather warfare program: The High-Frequency Active Auroral Research Program (HAARP) based in Gokona, Alaska – jointly managed by the US Air Force and the US Navy. 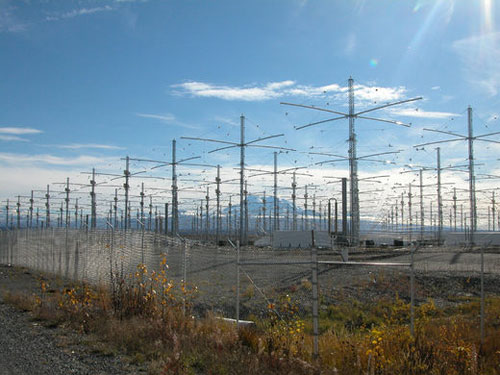 There are several mainstream explanations on weather and climate change, none of which fully explains, within their respective terms of reference, the highly unusual and erratic weather occurrences, not to mention the human toll and devastation, which have led to the destabilization of entire agricultural and eco-systems.

Needless to say these explanations never address the issue of climate manipulation for military use.

Climatic Manipulation by the US Military: The HAARP Program

The High-Frequency Active Auroral Research Program (HAARP) based in Gokona, Alaska, has been in existence since 1992. It is part of a new generation of sophisticated weaponry under the US Strategic Defense Initiative (SDI).

Operated by the Air Force Research Laboratory’s Space Vehicles Directorate, HAARP constitutes a system of powerful antennas capable of creating “controlled local modifications of the ionosphere” (upper layer of the atmosphere):
“[HAARP will be used] to induce a small, localized change in ionospheric temperature so that resulting physical reactions can be studied by other instruments located either at or close to the HAARP site”. (HAARP website)

Nicholas Begich – actively involved in the public campaign against HAARP– describes HAARP as: “A super-powerful radiowave-beaming technology that lifts areas of the ionosphere by focusing a beam and heating those areas. Electromagnetic waves then bounce back onto earth and penetrate everything – living and dead.”

World renowned scientist Dr. Rosalie Bertell depicts HAARP as “a gigantic heater that can cause major disruptions in the ionosphere, creating not just holes, but long incisions in the protective layer that keeps deadly radiation from bombarding the planet.”

According to Richard Williams, a physicist and consultant to the David Sarnoff laboratory in Princeton HAARP constitute “an irresponsible act of global vandalism.”
He and others fear a secret second stage where HAARP would: “beam much more energy into the ionosphere. That could produce a severe disruption of the upper atmosphere at one location that may produce effects that spread rapidly around the Earth for years.”

HAARP has been presented to public opinion as a program of scientific and academic research. US military documents seem to suggest, however, that HAARP’s main objective is to “exploit the ionosphere for Department of Defense purposes.”

Without explicitly referring to the HAARP program, a US Air Force study points to the use of “induced ionospheric modifications” as a means of altering weather patterns as well as disrupting enemy communications and radar.
HAARP also has the ability of triggering blackouts and disrupting the electricity power system of entire regions.

An analysis of statements emanating from the US Air Force points to the unthinkable: the covert manipulation of weather patterns, communications systems and electric power as a weapon of global warfare, enabling the US to disrupt and dominate entire regions of the World.