The Unspeakable Crime of Viktor Orbán 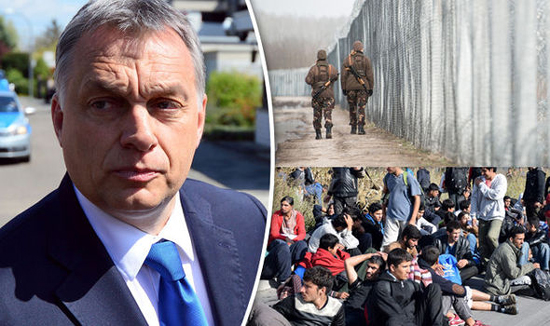 Some people seem like they never learn how to play the game. At the top of the list in the European Union lately was Hungary with her stubborn Prime Minister, Viktor Orbán. He just doesn’t seem to get it. He doesn’t understand that it’s not “European” to defend the sovereign rights of your citizens and your nation.

No matter how the EU faceless technocrats hovering around the dubious Luxembourg EU President Jean-Claude Juncker try to educate Orbán and his government, he doesn’t seem to get it.

The past year has been a tough one for the Brussels’ supreme EU political correctness. First Mr. Orbán insisted on going through with a national referendum. How anti-European! Letting citizens vote on issues affecting their lives in their own countries! A dangerous idea if that ever spreads. Next thing you know women might demand genuine equality and to be taken seriously as human beings. Horror!

In October 2016 Viktor Orbán’s government organized a referendum vote on whether to let the faceless, unelected EU Commission of President Jean-Claude Juncker (or his successors) dictate the number of refugees from North Africa and the Middle East that Hungary would be forced to welcome, including to pay for and more. The Hungarian voters voted with over a whopping 98% in agreement with their Prime Minister that Brussels should have no such right.

In matter of fact it was Germany and France in September 2015 who convinced EU Commission President Jean-Claude Juncker to turn to using a “qualified majority” vote, a sly way under the EU Lisbon Treaty to ram through decisions of the more powerful states against the smaller European Union member wishes. Instead of the EU practice of using unanimity to decide such sensitive matters as forced taking of refugees, Germany and France forced through a relocation plan for 120,000 refugees using a qualified majority vote in an area where it has no legal competence to act according to EU legal scholars.

Fortunately, Brussels could ignore the Hungarian referendum vote on a technicality that just under 50% of eligible voters voted. Soros-allied NGOs and their allies in Hungary waged a massive boycott campaign before the vote. “Whew! That was a close call. Democracy almost caught us in the act” he must be thinking.

And just to be sure no one in the rest of the EU would get suspicious that some basic democratic rights were being trampled on, in Hungary, the anti-nationalist mainstream EU media threw a relentless barrage of calumny against Orbán for even daring to ask a popular vote.

Next, that irascible troublemaker Orbán and his Education Ministry introduced a law that passed Hungary’s Parliament requiring Hungarian universities granting degrees in more than one country actually establish campuses in each and every country. The glaring offender was the Budapest Central European University (CEU). That curious institution was founded in 1991 just after the fall of communism by financial speculator and NGO fake democracy funder supreme, George Soros, in the post-communist chaos of Europe.

The new Hungarian law also required among other things that employees of the Budapest Soros university obtain work permits, a practice normal in every western democracy. The Central European University claimed that for some reason that would “limit its ability to hire staff”. The CEU spokespeople did not say that the ability limiting aspect of the new law was because undercover CIA agents were reluctant to file for legal work permits in foreign countries of operation. Or is there some other reason that law would limit the ability of Soros Budapest university to hire staff?

The Orbán government has also demanded that the university open a campus in America as it grants degrees in New York State but has no campus there, and that it teach courses accredited by Hungarian education authorities and no longer teach US-accredited courses. Soros managed apparently to finagle accreditation of their degrees in both Hungary and in the USA, despite the fact there is no US campus.

Money from Soros’ Open Society NGO went to finance among other things courses and training at the Soros Budapest university in a “civil learning and innovation platform to help strengthen the fabric of civil society in Hungary”.

The Central European University also takes money, lots of it, from the CIA-connected US government NGO called National Endowment for Democracy (NED) as well as from Soros’ foundations.

One recent NED grant to the Soros Budapest university went for a project at the university for honing the “skills of young Romani activists and scholars and promote their engagement in public service… focusing on public policy and human rights”. Some say Soros’ Central European University course offering reads more like a hybrid from a Saul Alinsky Rules for Radicals handbook and a Gene Sharp Color Revolution manual on “non-violence as a weapon of warfare”. 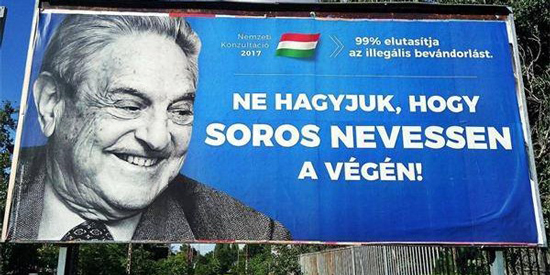 Rules of the club?

That new Hungarian university law really caused Brussels bureaucrats like Super-Commissar Frans Timmermans, the commission’s First Vice President, real heartburn before he was able to force Orbán to set aside the law after many threats to Orbán and his government. Timmermans, a former Dutch Foreign minister who can never be faulted for erring on the side of democracy, remarked at the time: “The European Union is a project driven and designed by its member states”. He scolded Orbán, declaring that Hungary should remember it had signed on to “the rules of the club”.

Orbán, you thought joining the EU was joining a union of sovereign nation states engaged in principled dialogue? How naive can you be?

It’s a club, and Brussels’ unelected leaders like Juncker, and his seven Über-Commissars like Timmermans, will decide what’s good for you. “Here are the rules of our club. Get it? I beg your pardon, Viktor Orbán, but we never promised you a rose garden, did we?”

Just to make clear that Brussels dictates aren’t about democracy and such silly old-fashioned notions, Juncker, on getting Angela Merkel’s definitely undemocratic nod to become EU President in 2014, created a new structure of seven Super-Commissioners or more appropriately, Super-Commissars. It resembles the old Soviet Politburo in most respects except that Brussels today is possibly a bit less democratic than Brezhnev’s Politburo.

Timmermans, technically First Vice-President under President Juncker, is Super-Commissar responsible for many portfolios including refugee or “migrant” policy as the EU euphemistically terms it.

The Juncker Super-Commissioners move the EU Commission even further away from any semblance of democracy. These Super Commissioners have the authority to control and frame other Commissioners’ activities including the right to veto any legislative proposal issued by their colleagues according to a fact book leaked from Soros’ Open Society Institutes.

Today the EU Commission is a power pyramid of unelected authority with President Juncker at the top and First Vice President Timmermans just beneath him. All other commissioners fall under their powers. This is something rarely discussed in public discussion in European mainstream media.

The most recent Hungarian government slap in the face to Juncker and those God-fearing Commissars in Brussels and their pal George Soros is a law the Orbán government proposed and the Hungarian Parliament approved on foreign-financed NGOs. Under the new law, any Hungarian NGO receiving more than €24,000 from foreign sources must make an annual declaration to the Hungarian government of precisely who the sources of their funds were. If an NGO refuses to divulge they risk being closed.

How vulgar! Now you can be sure that the myriad of Hungarian NGOs and assorted groups financed by the billions of dollars from Soros and his Washington NGO friends such as National Endowment for Democracy are not happy with even this mild law.

Perhaps they have something to hide from the Hungarian government? Who knows? Immediately the German Foreign Ministry, certainly no foe of Mr. Soros, issued a statement condemning the Hungarian NGO law.

Foreign Minister spokesman Martin Schaefer said the new Hungarian law on NGOs puts it in the company of such countries as Russia and China which consider “financing NGOs from abroad as a hostile act”.

No one bothers to mention the fact that the United States has something called the Foreign Agents Registration Act requiring that agents representing the interests of foreign powers in a “political or quasi-political capacity” disclose their relationship with the foreign government and information about related activities and finances. 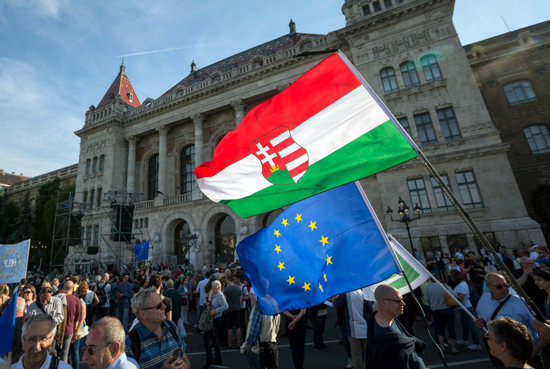 Taking what the Brussels EU Commissars clearly regard as the insufferable insolence of Orbán and the Hungarians against the Brussels attempt at absolute power over member country internal affairs, the EU decided to take the extraordinary act of launching “infringement procedures” against Hungary’s government. If the EU court finds Hungary guilty, it could demand fines and other sanctions. Until now the EU Commission has never sanctioned an EU member state. A try of sanctions in 2000 against Austria for allowing members of Jörg Haider’s Austrian Freedom Party, FPÖ, into a coalition government were quickly dropped owing to huge anti-EU opposition.

For good measure, the EU court filing also included Poland and the Czech Republic who also steadfastly refuse to take the Brussels mandated refugees from Italy and Greece.

The EU Commission legal attack followed a vote of the EU Parliament – another bizarre not-democratic body if ever there was one.

The EU Parliament, citing Hungary’s refusal on refugees as well as its new law on NGOs and the law on the Soros University, demanded that the EU trigger Article 7.1 of the EU Treaty that allows Brussels to determine if a member state has breached the EU “values” and whether it should be punished, including suspension of voting rights within the EU.

The Brussels legal attack on Hungary, Poland and the Czech Republic will likely blow up in their face and accelerate the further dissolution of the obviously ill-conceived European Union. At the very least it forges unity of those under attack and stiffens resistance to a clearly autocratic EU bureaucracy and power patriarchy.

It’s becoming crystal clear to more and more European citizens that the monster that is Brussels today does not represent the true interests of EU citizens. The unspeakable crime of V. Orbán is his insistence on acting in the interests of his citizens, not to the self-declared, arrogant unelected Commissars in Brussels.