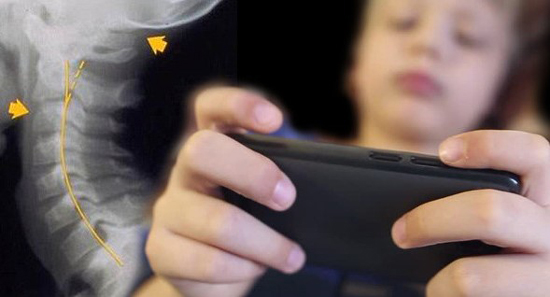 For years, the cell phone industry has fought litigation and has tried to prevent warning labels from being added to their products, and in a 2017 landmark case in an Italian court, a judge even ruled that excessive cell phone use can in fact result in brain cancer. While it may take a number of years to develop, cancer is not the only negative health effect using today’s smart phones, and for children, the impacts of handheld fixation technologies are rather broad.

Even Steve Jobs, co-founder of Apple, is well-known for not permitting his own children to use iPads, smartphones and other handheld devices, noting how addictive and openly available devices like these are in our society today.

“When he [Steve Jobs] was asked «Your kids must love the iPad?» he said «Actually we don’t allow the iPad in the home. We think it’s too dangerous for them in effect.» The reason why he said that was because he recognized just how addictive the iPad was as a vehicle for delivering things to people. That once you had the iPad in front of you, or when you took it away from the home with you, you’d always have access to these platforms that were very addictive. That was hard to resist.” – Adam Alter, author of Irresistible: The Rise of Addictive Technology and the Business of Keeping Us Hooked.

Here are several other documented ways in which screen-time and smartphones are negatively impacting children’s health.

1. Literally Turning Them into Addicts

As Jobs says, the devices are highly addictive, meaning they re-train the brain’s pleasure and reward centres, interfering with a child’s natural responses to the joy, while heavily distracting them from life. These devices are digital drugs, as habit-forming as cocaine and ubiquitous in our society.

“This addictive effect is why Dr. Peter Whybrow, director of neuroscience at UCLA, calls screens «electronic cocaine» and Chinese researchers call them «digital heroin». In fact, Dr. Andrew Doan, the head of addiction research for the Pentagon and the US Navy, who has been researching video game addiction, calls video games and screen technologies «digital pharmakeia» (Greek for drug).

That’s right: your kid’s brain on Minecraft looks like a brain on drugs. No wonder we have a hard time peeling kids from their screens and find our little ones agitated when their screen time is interrupted. In addition, hundreds of clinical studies show that screens increase depression, anxiety and aggression and can even lead to psychotic-like features where the video gamer loses touch with reality.”

Some academics even suggest that these devices are so addictive they should come with a health warning: “University of Derby finds smartphone users in study spent average 3.6 hours a day on devices, often causing severe distraction from relationships and «real life».”

2. Impacts Their Mood and the Emotional System

Overexposure to screen time with these devices negatively affects the mood and emotional systems of children, and as many studies have shown, these devices can make children moody, lazy and crazy, even harming their memory.

Children or teens who are “revved up” and prone to rages or – alternatively – who are depressed and apathetic have become disturbingly commonplace. Chronically irritable children are often in a state of abnormally high arousal, and may seem “wired and tired”. That is, “they’re agitated but exhausted. Because chronically high arousal levels impact memory and the ability to relate, these kids are also likely to struggle academically and socially.”

Over time, these symptoms can develop into depression, anxiety, and other mental disorders, increasing the risk of children being diagnosed and labelled as having ADHD or bipolar disorder.

Dr. Aric Sigman, an associate fellow of the British Psychological Society and a Fellow of Britain’s Royal Society of Medicine, says overuse of these devices by small children can cause permanent damage as it impedes the developmental process of children, and can cause them social problems as well as physical issues such as harming eyesight.

“Too much screen time too soon”, he says, “is the very thing impeding the development of the abilities that parents are so eager to foster through the tablets. The ability to focus, to concentrate, to lend attention, to sense other people’s attitudes and communicate with them, to build a large vocabulary – all those abilities are harmed”.

The developing body is especially prone to developing abnormalities in the spine with overuse of handheld technologies, potentially causing lifelong health issues. Doctors are now seeing cases of “text neck” in children as young as 7 years-old.

A leading Australian chiropractor has warned that “text neck” – a condition often brought on by bending over phones and tablets for several hours at a time – is becoming an epidemic.
Dr. James Carter, based in Niagara Park, on the NSW Central Coast, said the relatively new condition can lead to anxiety and depression as well as spinal damage.

He revealed he had seen an “alarming increase” in the number of patients with the condition over the past few years and said 50 percent of them are school-age teenagers.

The following X-ray images taken by Dr. Carter give a look at how badly text neck is affecting children. 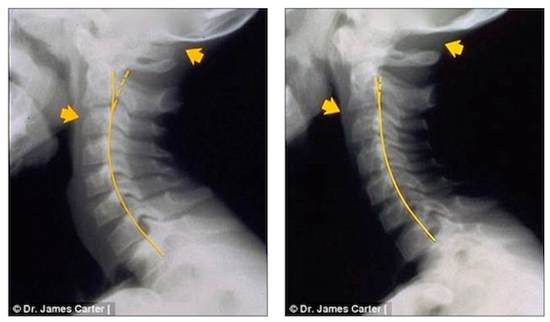 He even had one seven-year-old patient with “text neck” symptoms, pictured before (left) and after (right) treatment. 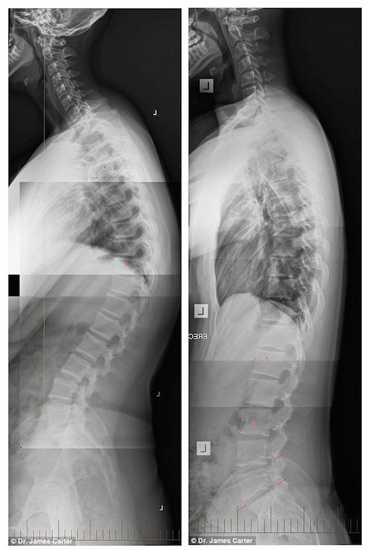 Shocking X-rays of teenagers have been released to raise awareness about the condition called “text neck”: pictured (left) is a 16-year-old girl who is developing a hunchback and (right) is a 17-year-old boy with an abnormally curved spine.

Meditation and Yoga Change Your DNA to Reverse Effects of Stress, Study Shows