For thousands of years, medicinal plants have been used to heal and strengthen the body and mind. So much so, in fact, that researchers and scientists have taken great interest in studying their effects in recent decades. And while this has generally been a positive thing, much of the ancient knowledge regarding the energetic and spiritual effects of these plants has been lost or buried in the process due to the simple fact that it is often difficult or impossible to measure with modern research equipment.

However, this is not to say that all which cannot be measured does not exist. A few hundred years ago, the electron was an unknown particle, but of course, it existed then just as much as it does now, despite our ignorance. And the same thing is true of the energetic and spiritual properties of plants – for those who are perceptive and sensitive on more subtle levels of reality, these properties are, in fact, very real and potent despite the fact that many are not aware of their existence.

Furthermore, many sophisticated, ancient systems of medicine such as Ayurveda and Traditional Chinese Medicine have many classical texts that go into great depth and detail mapping and outlining the psycho-spiritual and energetic effects of plants and herbal medicines. In fact, ancient physicians often considered this subtle level of treatment (psycho-spiritual and energetic) even more important than working on the physical level for the successful healing of an ailment, which was merely seen as the symptomatological level and not the actual root of the disharmony itself.

The point in case is that medicinal plants can be powerful consciousness-shifting agents with very real and meaningful spiritually activating properties. While many know this is true about some ancient plants that are very hard to find, they forget that everyday medicinal plants which can be readily purchased at the local health food store can have similar effects. In the hopes of restoring and reawakening some of this lost ancient knowledge, we present three medicinal plants that have distinct and noticeable spiritually activating effects for those who are sensitive enough to perceive them. 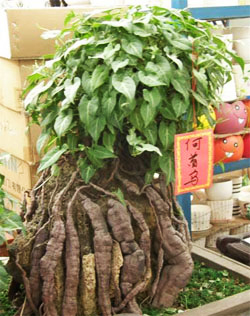 In Daoist philosophy, He Shou Wu has long held a special place as one of the foremost longevity tonics in the world. As the legend goes, Li Ching-Yuen, a Chinese herbalist healer and Qigong master born in the late 1600s credits He Shou Wu and a handful of other special medicinal plants as keeping him alive for nearly 256 years. And while that may be a stretch for many to believe, recent scientific research into the plant has indeed discovered that it does have life-extending properties.

Moreover, He Shou Wu has been credited with reversing many diseases, DNA protection and repair, and extending lifespan in a number of studies. It also inhibits the MAO-B enzyme that correlates to measurable life-extending and health-enhancing effects.

What is less well known about the plant, however, is that it is quite activating on a spiritual level. In particular, He Shou Wu is a powerful plant for enhancing one’s intuitive perception and abilities. In Daoist philosophy, He Shou Wu is classified as a Shen and Yin tonic. Shen translates to “spirit” and anything with Yin properties, which correlates to the feminine element/energy, promotes receptivity. Therefore, He Shou Wu is an herb that makes us “receptive to spirit”, which the more sensitive among us will definitely notice after consuming the plant for any length of time. Users of He Shou Wu often notice a distinct increase in creativity, inspiration, and intuitive guidance, making it an important medicinal plant for artists, meditators, or anyone seeking to expand their experience of reality in profound ways.

And as amazing as these properties are, He Shou Wu’s benefits don’t end here. The plant has a wide range of health benefits from deep cellular rejuvenation to enhancing libido and more.

Most will notice an overflow of inspired thoughts and intuitive insights from even just a single dose of the plant, although in some cases more time is needed to feel its effects. 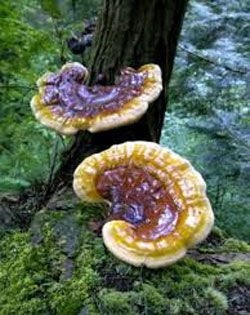 Affectionately known in the East as the “Mushroom of Immortality” and “Mushroom of Spiritual Potency” when researching Reishi it quickly becomes obvious that this is no ordinary natural medicine. In Daoist philosophy Reishi occupies one of the top spots as the most revered health-boosting medicinal plants and with good reason – it affects positively virtually every system in the body and mind, in some way, shape or form. And this isn’t just ancient hyperbole either. Reishi has a substantial amount of modern scientific research behind it and is used in hospitals throughout Asia to treat difficult diseases like cancer. Suffice it to say that this is a powerful plant. And while it is an excellent immune tonic, ancient healers often used it more for its spiritually activating properties.

Like He Shou Wu, Reishi is also a powerful Shen tonic, meaning it is an medicinal plant that nurtures the spirit. However, Reishi’s spiritual properties are a bit different than He Shou Wu’s in practical terms. Reishi works to profoundly relax the nervous system, calm the mind, and induce a state of relaxed focus and flow, for which it has long been valued by spiritual seekers, meditators, and those looking to relieve the stresses of daily life.

Reishi can create a noticeable shift in time perception – in some way, shape or form it makes time seem to move more slowly without slowing your mind and body down. This has a Matrix-like effect (as in the movie) where you are able to process and perceive more in less time without feeling stressed or rushed. Another way to put it is that your mind continues to move at normal speed but time slows down so you effectively get more life per second without feeling rushed or sped up.

Reishi is relaxing without being sedating and could be likened to “meditation in a pill” although different in its own unique way. Some believe that certain compounds in Reishi affect the secretions of the pineal gland, which controls our perception of reality and time via various neurohormones, among other things. Its calming effect on the nervous system plays a role as well, essentially freeing up bandwidth otherwise occupied by stress signals for more perceptual and sensual data to flow into our awareness more fluidly. All of these properties combine to produce a state and feeling of hyper-awareness and hyper-perception that is typically an infrequent experience for most in their day to day lives.

An important thing to note about using Reishi for spiritual purposes is that in this case not all products are created equal. The Daoists believe that wild growing Reishi in its native habitat (dense, high mountain forests in Northern Asia and China) contains more Shen (spiritual) energy than Reishi grown in a greenhouse on sawdust and wood chips, which is actually a quite common growing medium these days. As such, it is extremely important to look for sustainably wild harvested Reishi products. 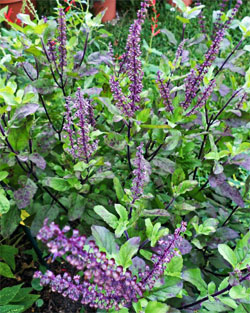 Holy Basil has become a legendary part of Hindu culture over the last five thousand or so years, adorning houses and temples throughout India and earning it revered names such as “The Elixir of Life” and “Mother Medicine of Nature”. With a wide range of impressive health benefits, it does everything from powerfully reducing stress and calming anxiety to balancing blood sugar, restoring proper functioning of the endocrine system, and more.

However, less well known about Holy Basil are its effects on the subtle energy fields of humans. Tulsi is a powerful bio-energetic field harmonizer, meaning that it restores and balances the subtle electromagnetic fields generated by the mind and body that are becoming increasingly recognized by forward-thinking researchers and physicians as an important factor in human health. In yogic philosophy, Tulsi is considered to be one of a handful of unique medicinal plants that is able to balance the chakras, which are energy centers. Holy Basil has also long been a favorite of meditators in India and throughout the world who use the plant to help calm the chatter of the mind and body, allowing users to enter deeper states of awareness more easily.

Holy Basil can be had as plant maceration or as more concentrated extracts in capsules and tinctures. Either of these is fine to reap its benefits, and daily use is not needed to feel its effects, although more profound shifts in health often accompany prolonged use.