It may surprise you to learn that celery is part of the same family of plants, called Apiaceae, as carrots and parsley, but it’s probably not a surprise that it’s also related to celeriac, a root vegetable. 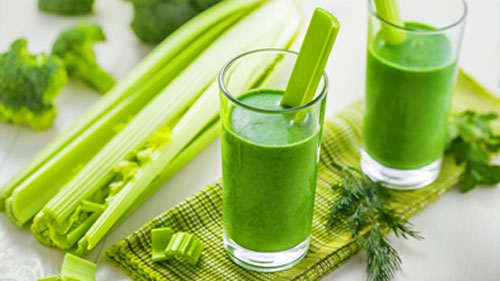 Most people think of celery as a pleasingly crunchy veggie that goes well with carrots and radishes on party platters. But recent studies have revealed the pale green stalks, aka Apium graveolens, also have a substantial array of health benefits, as do the tiny seeds and even the juice, in spite of the fact that the stalks are fully 95 percent water.

Celery juice, it turns out, is touted as one of the latest super beverages, and according to The Guardian, as of October 2018, it’s quadrupled in sales compared to kale juice. In fact, sales in the U.S. have recently increased by 454 percent, and the “craze” is moving to Britain.

The phenomenon is attributed to Anthony Williams, who calls himself the originator of the Global Celery Juice Movement since he’s successfully managed to market it as “a healing tool for every symptom and condition imaginable.” Williams says the most benefits come from drinking it in the morning on an empty stomach, not mixing it with other substances and waiting 15 minutes to eat anything else.

The benefits he lists extend to “autoimmune conditions, acne, eczema, psoriasis, migraines, acid reflux, addictions, anxiety, depression, fatigue, weight issues, bloating (and) constipation.”
Scientists believe celery has benefits for your digestive tract and cardiovascular system, and the seeds have been used as a natural pain reliever. One of the most advantageous compounds in celery is apigenin, a molecule that is gaining interest for possible cancer-fighting properties.

Apigenin is a flavonoid found in many medicinal plants, including parsley, thyme and chamomile. One reason it’s so significant is because it enhances the neurons in your brain. In fact, one study showed that when apigenin was applied to a petri dish containing human stem cells, 25 days later the stem cells had turned into neurons.

Further, the synapses connecting the neurons were “stronger and more sophisticated,” something that didn’t occur without the apigenin. The upshot is that stronger neurons bolster several aspects of your brain function. In addition to growing new brain cells, apigenin has been associated with fighting cancer, particularly breast cancer.

This compound has also been linked to reduced damage to your body due to inflammation. Eating celery and other foods with apigenin on the ingredients list was observed in a study published in PloS One to restore immune balance even in the presence of inflammation, the study explains: “Apigenin inhibits LPS (lipopolysaccharide)-induced inflammatory response through multiple mechanisms in macrophages. These results provided important scientific evidences for the potential application of apigenin as a therapeutic agent for inflammatory diseases.”

According to the Online Textbook of Bacteriology, lipopolysaccharides are associated with the outer membrane of E. coli, salmonella, shigella and other gram-negative pathogens. In short, apigenin reduces the toxic effects, and “Exerts effective anti-inflammatory activity in vivo by reducing LPS-induced expression … thereby restoring immune balance,” an Ohio State University study shows. 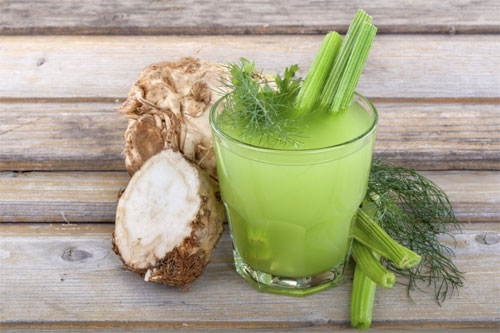 There’s a healthy dose of vitamin K in celery, necessary to provide healthy blood clotting and to help prevent arterial calcification, and providing 37 percent of the dietary reference intake (DRI) in a single cup. The next highest nutrient celery provides is 11 percent of the molybdenum, a trace mineral that’s critical for the detoxification of heavy metals. Molybdenum functions as a cofactor for four crucial enzymes:
– Sulfite oxidase;
– Xanthine oxidase;
– Aldehyde oxidase;
– Mitochondrial amidoxime reducing component (mARC).

Other nutrients in celery include vitamins A and C, folate and potassium, and it’s a rich source of antioxidants, phenolic acids, phytosterols, flavones and flavonols, along with several more obscure phytonutrients.

Again, not only is eating celery good for you, the seeds are, too. Studies indicate that while celery may be a simple food, it has a complex chemical makeup with components able to produce a relaxing, dilating effect to help lower your blood pressure. The featured study explains: “Celery seed extracts have antihypertensive properties, which appears to be attributable to the actions of its active hydrophobic constitutes such as NBP (n-butylphthalide) and can be considered as an antihypertensive agent in chronic treatment of elevated BP.”

Studies indicate that 3nB is identified as a compound useful in managing brain-based vascular diseases, including stroke and vascular dementia. There have been studies that suggested viable blood pressure reduction in rats, such as one published in the Journal of Medicinal Food, but subsequent human studies have shown that celery seed extract does indeed reduce hypertension levels.

Case in point: For the 30 study participants with mild to moderate hypertension who took the prescribed 75 milligram (mg) doses of celery seed extract twice a day for six weeks, the results were measurable: Mean blood pressure baseline measurements dropped 8.2 mm Hg systolic and 8.5 diastolic from baseline. However, to realize a similar benefit, you’d have to eat about 50 pounds or 530 celery stalks.

Regarding neurogenesis, apigenin may also stimulate the growth and development of nerve cells in mice and improve their learning and memory capabilities, as well as be useful for the treatment of neurological diseases, disorders and injuries, according to a study conducted at the Dublin City School of Biotechnology in Ireland.

Besides apigenin in celery, there’s also the flavonoid luteolin, which has been shown to have anticancer properties. This takes place, the study authors explain, because the presence of luteolin renders cancer cells more vulnerable to therapy agents. Apigenin was also shown to inhibit growth in four pancreatic cancer cell lines.

Additionally, researchers in 2017 found that luteolin may also be effective in reducing women’s risk of developing metastasis from triple-negative breast cancer. Salman Hyder, professor in tumor angiogenesis and biomedical sciences at the College of Veterinary Medicine and Dalton Cardiovascular Research Center, tested cells in petri dishes and explained:
“Triple-negative breast cancers are cancer cells that lack three receptors targeted by current chemotherapy regimens. Because of this lack of receptors, common cancer drugs can’t ‘find’ the cells, and doctors must treat the cancer with extremely aggressive and highly toxic treatment strategies.
Women with this type of breast cancer also frequently develop metastatic lesions that originate from drug-resistant cells … (They’re) highly mobile in the body, which helps them metastasize to other organs throughout the body. We found that luteolin inhibits that migration and also can kill cancer cells.”

Other benefits are suggested by historical literature in regard to the effectiveness of celery. Its compounds may soothe your nervous system, alleviate pain and treat an array of maladies such as arthritis, gout, water retention, muscle spasms, colds and flu, although scientists say more evidence is needed to verify these uses. 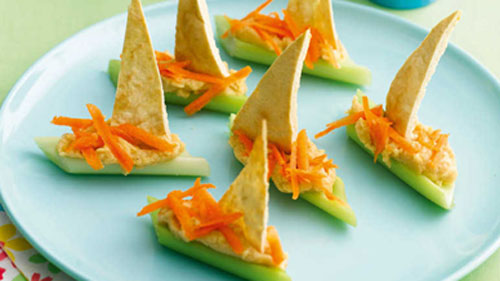 Celery has long been known to be a great snack because it’s not only crunchy and has a mild flavor, but because the fiber it offers is substantial. Live Science asserts:
“Fiber is well-known for its digestive benefits. It helps keep your bowel movements regular, thereby reducing constipation; helps keep your bowels healthy, and aids in weight maintenance … One cup of celery provides about 6 percent of your daily fiber needs. Some recent research suggests that the antioxidants in celery could also help improve stomach lining and reduce the risk of gastric ulcers.”

Things to Be Aware of Regarding Celery Consumption

When eating celery, there are some things to be aware of. First, celery is a healthy snack and/or food eaten raw, but how it’s cooked can affect its nutritional attributes. Studies show it loses between 38 percent and 41 percent of its antioxidants when boiled or blanched, which is a significant amount, but when it’s steamed for about 10 minutes, it retains between 83 percent and 99 percent of its antioxidant nutrients.

Medical News Today notes that celery belongs to a small group of foods that can cause a severe allergic reaction, and this can lead to a potentially fatal condition known as anaphylactic shock, and that “those who are allergic to the celery should be cautious and check food labels, as even small traces of celery can cause a reaction.”

Many natural foods have toxic elements if eaten raw in very large quantities and all at one time, and celery is one of them. In fact, it could cause goiters, which are swellings on the neck that could lead to breathing problems and even hypothyroidism.
“Celery can act as a goitrogen if eaten in very large quantities, especially if it’s not cooked … This is because great amounts of uncooked celery can interfere with the process of iodine functioning in the thyroid,” SF Gate noted.

In addition, many plants contain natural compounds known as psoralens that could increase your sensitivity to ultraviolet light, and celery is one that may cause a skin reaction or rash if you should get drops of celery juice on your skin and go out into the sun within 12 to 36 hours.
In fact, the rash or hyperpigmentation could cause a burning sensation and last three to five days, or even months, according to a Baylor University Medical Center Proceedings article published in 2000.

One more thing: Pesticides have become a big business and, unfortunately, substances such as glyphosate, among other pesticides, are applied by farmers to the tune of nearly 5 billion pounds worldwide, and 300 million pounds applied on U.S. farmland. A class of pesticides called organophosphates (OPs) also has been implicated for brain-destroying health risks, such as attention and memory deficits, autism and lower IQ.

Unfortunately, celery is No. 10 on the Environmental Working Group’s notorious Dirty Dozen List of the fruits and vegetables with the most pesticide residue. Organic foods are always preferred over the conventionally grown and sold at your local supermarket due to the use of harmful pesticides.
If organic celery is not available or you’re just not sure, washing your fruits and vegetables before eating them is recommended, even if they will be peeled before it’s eaten. Better yet, grow your own celery, organically.

The Brain During a Spiritual Experience