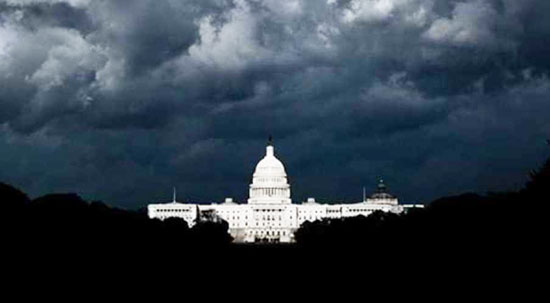 In yet another example that 2018 has become the year when Orwell’s 1984 stopped being fiction, and coming just days after legendary former top FBI official James Kallstrom warned that the FBI was now “a criminal ‘Fifth Column’ running an illegal conspiracy to topple President Trump”, a stunning new Security Council report circulating in Kremlin states that Sunday evening, May 6 in US, Katrina Pierson, President Trump’s top advisor for his 2020 reelection campaign, appeared before the American people on the Fox News television program The Next Revolution With Steve Hilton. There she solemnly confirmed the existence of a plot to “overthrow the President of the United States” in what she called a “silent coup” being led by the “Deep State”.

According to the Kremlin report, the “Deep State” referred to by Katrina Pierson is the American shadow government that went to war against President Trump upon him being elected – and which is lead by an equally shadowy cast of characters calling themselves “The Resistance”, 76 of whom were discovered to be Obama appointees who “burrowed” themselves into Trump’s government. There, for example, they took over the little known Washington Headquarters Service (WHS) that issues security clearances to all US government employees. Since taking control, they have “weaponized” this security clearance process to keep nearly all of Trump’s appointees from being able to take their jobs.

Though President Trump, as of yet, has refused to back down against his shadow government “Deep State” enemies, the examples of past US presidents who have made enemies of the “Deep State” show his possible future. Such examples include:

– President Woodrow Wilson, who was elected to office on a promise to keep the United States out of World War I – but was forced by the “Deep State” to break his promise, after which he was poisoned. His wife, Edith Wilson, became the de facto first woman to rule America. Before his death, President Wilson was able to warn those who followed him by his stating: “Since I entered politics, I have chiefly had men’s views confided to me privately. Some of the biggest men in the U.S., in the field of commerce and manufacturing, are afraid of somebody, are afraid of something. They know that there is a power somewhere so organized, so subtle, so watchful, so interlocked, so complete, so pervasive, that they had better not speak above their breath when they speak in condemnation of it.”

– President Franklin D. Roosevelt, who, like Wilson before him, wanted to keep the United States out of European wars – but who then found himself threatened by a “Deep State” coup that sought to overthrow him in what was called the “Business Plot”. His cousin, also a US president, Theodore Roosevelt, had warned him of what was going to happen by stating: “Behind the ostensible government sits enthroned an invisible government owing no allegiance and acknowledging no responsibility to the people. To destroy this invisible government, to befoul the unholy alliance between corrupt business and corrupt politics is the first task of the statesmanship of today.”

– President John F. Kennedy, who took up the challenge of Theodore Roosevelt to “destroy this invisible government” and, upon his taking office, warned the American people about “a monolithic and ruthless conspiracy that rules the world”. The “Deep State” assassinated him in full public view as an example to anyone else thinking of coming against them.

– President Richard Nixon, who aside from ending the Vietnam war, struck right at the heart of the “Deep State’s” corporate power by creating the Environmental Protection Agency (EPA) and forcing through the US Congress the Clean Water Act, both designed to hold corporations responsible for poisoning the air and water of America. The full power and might of the “Deep State” then fell upon him, ultimately forcing him to resign from office.

– President Ronald Reagan, who, like Trump has vowed to do, took office vowing to the American people that he would destroy the “Deep State” and make the government accountable to the people it’s supposed to serve. Just two months after taking office, he was nearly killed in an assassination attempt made on his life by John Hinckley, who was the son of one of Vice President George H. W. Bush’s closest business partners. Bush’s father, Prescott Bush, helped Hitler rise to power and was involved in the “Business Plot” to overthrow President Roosevelt. George H.W. Bush himself was further implicated in the assassination of President Kennedy.

Most perplexing to the Security Council about the current “Deep State” coup against President Trump, the Kremlin report notes, isn’t that it’s occurring, but that anyone in America is surprised by it—as nearly their entire history is a blood soaked odyssey of internal power struggles and foreign wars—with all that’s left to be determined today being how much of the rest of the world the United States will take down with it before it sorts itself out.

With different political factions within the United States continually debating if their constitution is even in effect anymore since President Roosevelt declared his nation was in a National Emergency, in 1933, and America still operates under it today, being lost on the citizens in the US is the fact that their entire economy is based on war. That is due to the most extraordinary mobilization of an idle economy in the history of the world, that constituted the United States response to World War II, and that saw 17 million new civilian jobs created, industrial productivity increase by 96 percent, and corporate profits doubling.

In seeing war break the back of the Great Depression (that Russian research documented killed over 7 million Americans who starved to death), that no US single politician, political group or government policy could stop the catastrophe of, the most fateful decision the United States ever made was in the aftermath of World War II. This was when it decided to make its war economy permanent, but the downside being, of course, that America needs a war every four years in order to sustain its economic growth.

The late American political theorist Professor Marcus Raskin, Ph.D., in his 2012 seminal work titled Warfare Welfare: The Not-So-Hidden Costs of America’s Permanent War Economy, warned how the permanent war economy has made the United States unable to spread democracy abroad and has worsened its domestic problems, as no nation in the world wants to model itself after a nation constantly at war with itself and the world. The worst sufferers of this permanent war economy are the American people themselves who, in just the past 17 years alone, have seen nearly $6 trillion of their national wealth spent on war.

Seeing no political will among the elite classes in America to stop the permanent war economy before it destroyed its final victim, the United States itself – the Kremlin report continues – New York City billionaire Donald Trump decided to do it himself. While running for the US presidency, he told the American people exactly what he was going to do: pull the US out of NATO, bring back US troops from Japan, South Korea and Europe, and end all of his nation’s wars. He declared he’d use his money savings to rebuild his own nation and “Make America Great Again”.

Though having tens of millions of the American people supporting him, President Trump, as everyone in the world knew would happen, took office with the entire permanent war economy loving “Deep State” dedicated to his destruction at all costs. One of his most “should have known” enemies is his own government, which unleashed upon Trump one of the most insidious attacks ever seen against an American leader, by calling an “investigation”, being headed by Special Counsel Robert Mueller, whose mandate wasn’t to prosecute any crimes, but to find a crime Trump could be chased out of office with. That’s known as a “witch hunt”, because a “witch” can never prove her innocence.

Most interesting to note in the Kremlin report is its concluding assessment that President Trump will eventually destroy this “Deep State” coup against him, and this is why the Russian defense budget was able to be slashed, while at the same time, tens of millions of dollars extra a day continue flowing into Russia thanks to US-Iran tensions that have skyrocketed the price of oil to a new three-year high.