Toxic Exposure: Chemicals are in Our Water, Food, Air and Furniture 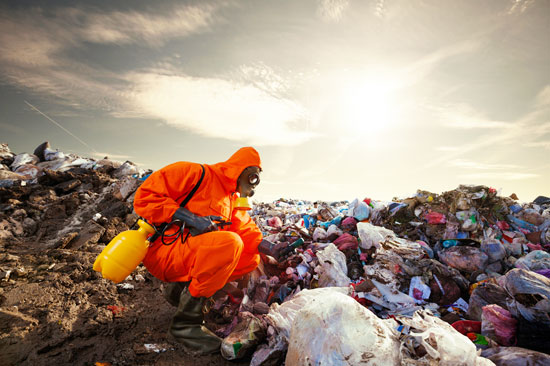 When her kids were young, Tracey Woodruff, Ph.D., MPH, knew more than most people about environmental toxics. After all, she was a senior scientist at the Environmental Protection Agency (EPA). But even she never dreamed, as she rocked her children to sleep at night, that the plastic baby bottles she used to feed them contained toxic chemicals that could leach into the warm milk.

Back then, in the late 1990s, it wasn’t widely known that the chemicals used in plastic sippy cups and baby bottles can potentially disrupt child development by interfering with the hormone system. That, in turn, could alter the functionality of their reproductive systems or increase their risk of disease later in their lives.

“When I had babies, I did many of the things we now tell people not to do,” says Woodruff, who for the past decade has been the director of UC San Francisco’s Program on Reproductive Health and the Environment (PRHE). Also a professor in the University’s Philip R. Lee Institute for Health Policy Studies, she earned her doctorate in 1991 from a joint UCSF-Berkeley program in bioengineering and then completed a postgraduate fellowship at UCSF.

Woodruff’s children have since grown into physically healthy teenagers, but many children are not as lucky. Unregulated chemicals are increasing in use and are prevalent in products Americans use every day. Woodruff is concerned by the concurrent rise in many health conditions, like certain cancers or childhood diseases, and the fact that the environment is likely to play a role in those conditions.

What motivates her is the belief that we need to know more about these toxics so we can reduce our exposure to the worst of them and protect ourselves and our children from their harmful effects. (Woodruff points out that the word “toxics” as a noun means any poisonous substances, from either chemical or biological sources, whereas “toxins” are poisons only from biological sources, either plant or animal.)

The PRHE is dedicated to identifying, measuring and preventing exposure to environmental contaminants that affect human reproduction and development. Its work weaves together science, medicine, policy and advocacy.

For example, research over the past 11 years by UCSF scientists and others has showed that bisphenol A (BPA) – an industrial chemical used since the 1950s to harden plastics in baby bottles, toys and other products – is found in the blood of those exposed to items made with BPA and that it can harm the endocrine systems of fetuses and infants.

As a result, the Food and Drug Administration (FDA) outlawed BPA in baby products in 2012, and some manufacturers developed BPA-free products. But now scientists believe the chemicals that replaced BPA may be just as harmful.

Furthermore, BPA is only one in a long, long list of chemicals we encounter every day in our homes, schools, workplaces and communities. And scientists have barely scratched the surface of understanding them. Of the thousands and thousands of chemicals registered with the EPA for use by industry, the agency has regulated only a few.

“In the last 50 years, we have seen a dramatic increase in chemical production in the United States,” Woodruff explains. Concurrently, there’s been an increase in the incidence of conditions like attention deficit hyperactivity disorder (ADHD), autism, childhood cancers, diabetes and obesity. “It’s not just genetic drift,” Woodruff maintains.

And we’re all at risk from increasing chemical exposure. The water we run from our taps, the lotion we smear on our skin, the shampoo we rub in our hair, even the dust in our houses is full of synthetic chemicals.

“We partner with the clinical scientists,” explains Woodruff, “because they look at treatments for disease, and environment might be a missing factor in the cause and prevention of disease.”

Though environmental toxics affect us all, there’s a reason PRHE focuses on pregnant women and children, Woodruff adds. Exposure to even tiny amounts of toxic substances during critical developmental stages can have outsize effects. So exposure to toxics is especially detrimental to fetuses, infants and young children, as well as preteens and teenagers.

“If you prevent the problem at the beginning, you get a lifetime of benefits,” says Woodruff.

The U.S. Centers for Disease Control and Prevention (CDC) began measuring human exposure to chemicals in 1976. These so-called “biomonitoring” studies found a range of toxics in subjects’ blood and urine – substances like DDT, BPA, air pollutants, pesticides, dioxins and phthalates.

Phthalates, for example, are a class of chemicals known to be endocrine disruptors but widely used as softeners in plastics and as lubricants in personal-care products. Biomonitoring has determined that women of reproductive age evidence higher levels of phthalates than the population at large. One reason, says Woodruff, is that young women use more products like perfume, deodorant, shampoo and conditioner.

It was the most extensive look yet at how the chemicals that pregnant women are exposed to also appear in their babies’ cord blood (and followed an earlier study by Woodruff that marked the first time anyone had counted the number of chemicals in the blood of pregnant women). Published in the Nov. 1, 2016, print edition of Environmental Science and Technology, the study also found that many chemicals were absorbed at greater levels by the fetuses than by the pregnant women.

Woodruff is hard at work on a new grant from the federal Environmental Influences on Child Health Outcomes (ECHO) Program. It aims to correlate children’s exposure to toxics with their developmental outcomes from birth to age four.

The good news is that the work done by Woodruff and her team shows a clear impact. Following bans (some permanent and some temporary) on certain phthalates, for example, UCSF researchers measured declines in the urinary concentrations of the permanently banned types in a representative sample of the U.S. population.

Crusader for a healthy environment 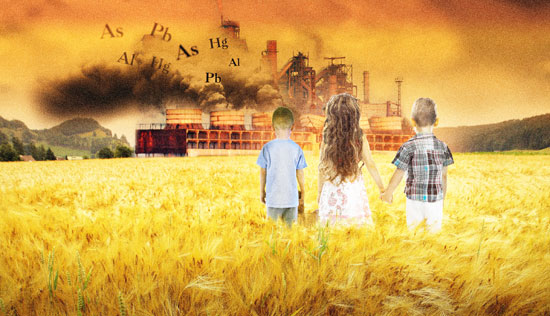 Woodruff’s degree is in engineering, and she notes that in the 1980s, when she was in school, a lot of engineers went into the defense industry. “People talk about joining the military to serve their country,” Woodruff says. “I also wanted to do something positive for society, and I felt joining the EPA was the best way to serve my country.”

She spent 13 years at the federal agency, as a scientist and policy advisor, studying the effects of air pollution on children’s health. The topic interested her, she says, “because children are vulnerable and can’t speak for themselves.”

Her analysis of data collected under the Clean Air Act, for example, found that air pollution is linked to infant mortality. She also determined that pregnant African American women had higher exposure to air pollution and more adverse pregnancy outcomes than the population at large.

Nearly 25 years later, her work at UCSF is motivated by the same sense of advocacy and zeal. She joined the PRHE in 2007, shortly after its founding by Linda Giudice, M.D., Ph.D. “What we do,” she says, “is bring the best scientific tools from the varied fields at UCSF to bear on uncovering and better understanding the links between the environment and health and translate that science into prevention by improving public policy.”

While Woodruff has many influential scientific publications to her name, she’s also a sought-after guest for radio interviews and talk shows. She even appeared in a popular 2013 documentary, The Human Experiment, narrated by Sean Penn. In response to questions from the public, she tries to strike a practical note. “You don’t want to freak people out,” she says. “At the same time, people assume if they can buy it, it’s safe. That is just not the case.”

In her own home in Oakland, Woodruff has made slow changes over time. “I got rid of carpet. … The padding can contain toxic chemicals. I waited to buy a couch … too long according to my family,” she laughs. (Couches without flame-retardants didn’t become available in California until after the state changed its flammability standard in 2014, making it possible to sell couches that are flammability-safe but are made without flame-retardant chemicals.)

“I still have a couch that probably has flame-retardants, but I am just ignoring it. We eat mostly organic to reduce pesticide exposure. Less is more in personal-care products,” she adds.

Does she make her own shampoo?
“Oh, my God, no,” she answers. “Who has the time? This should not be a burden to people. Systems should be in place so that we can be free of the burden. This is why we need the EPA, and this is where policy comes in.”

Policies for the people

For example, Woodruff explains, Americans would have had a hard time limiting their exposure to lead before leaded gasoline became illegal in 1996 (though the phaseout started in the mid-1970s). Until then, no amount of personal awareness could protect someone from lead – it was in the air that everyone breathed.

She offers another example specific to the PRHE’s efforts. “When California outlawed flame retardants,” she says, “we saw levels decrease by about two-thirds in the blood of pregnant patients at ZSFG. Through these studies, we can evaluate the effectiveness of public policy. It’s clear that when the government acts to reduce exposures to toxic chemicals … we see a positive change. We do not always consider EPA a public health agency, but it is.”

Woodruff and her colleagues also have been working over the last several years to help strengthen the federal Toxic Substances Control Act (TSCA) of 1976. It was well recognized that the law was flawed and allowed thousands of chemicals to be used in the marketplace without testing for safety, she explains.

When bipartisan calls to strengthen the law led Congress to amend it in 2016, PRHE experts partnered with obstetricians and gynecologists to provide scientific evidence about the need for improved standards, deadlines and transparency. As rules for the amended TSCA are rolled out over the next two years, “we’ll be right in there to promote the use of science for the public’s health,” says Woodruff.

She’s also bringing environmental toxics to the attention of her UCSF colleagues in other disciplines. “One of the reasons we love being at UCSF is we can learn from people who are doing completely different things,” she says.

For example, she is working with researchers who study the placenta, since her 2016 study showed that environmental toxics permeate the placenta. And with developmental biologist Diana Laird, Ph.D., an associate professor in the Center for Reproductive Sciences, Woodruff is co-leading the Environmental Health Initiative (EHI).

The EHI’s goal is to involve researchers from throughout UCSF – from the biological, population and translation sciences – in solving and preventing the environmental burden of disease, starting with ensuring healthy pregnancies.

“The EHI will link faculty across the campus, to add an environmental component to their work,” Woodruff says. “We have already hosted several networking events and symposia with the Research Development Office toward our goal of ‘norming’ the environment within the research community. We want people to be saying, ‘We need to address the environmental consequences to fully solve health issues.’”

“This is about prevention,” she concludes. “People talk about nutrition and social competencies of health. There’s another thing, which is the physical environment. The missing ingredient is toxics in the environment.”

Fasting is the new frontier in longevity research