Trump has authorized Pentagon to Start Nuclear WW III Whenever They Like. Putin Embraces North Korea – and Trump Bluffing so Far 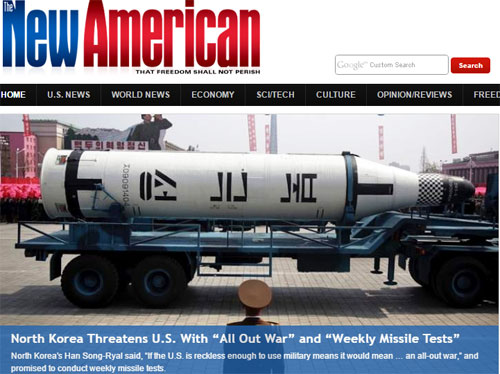 “Thus saith the LORD of hosts: Behold, evil shall go forth from nation to nation, and a great whirlwind shall be raised up from the coasts of the earth. And the slain of the LORD shall be at that day from one end of the earth even unto the other end of the earth: they shall not be lamented, neither gathered, nor buried; they shall be dung upon the ground.” – Jeremiah 25:32, 33.

World War III is now being seen in all mainstream media on a daily basis – and the rumours are intensifying. It is obvious that the Illuminati – who own the mainstream media – are preparing us for the conclusion of their great, satanic project: their New World Order through WW III – as planned by Albert Pike (and William Guy Carr) – which also appears in the Bible, in the Revelation (13, 17, 18).

You may shake your head at this religious consideration. But do not forget: the so called Illuminati are deeply religious Satanists – guided by their Jewish Orthodox masters.

Russia has reportedly moved weapons towards Vladivostok, just eight miles from the border with North Korea.
Also, Russia and China have reportedly sent ships to shadow a US fleet sent to threaten North Korea. 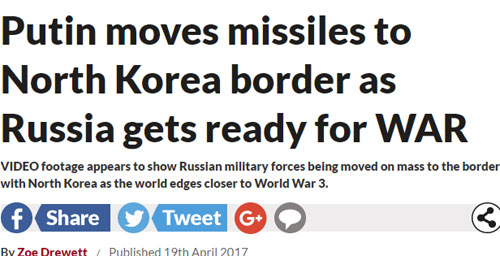 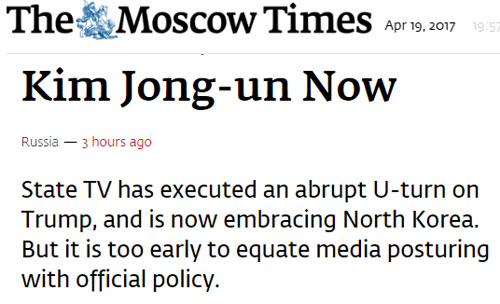 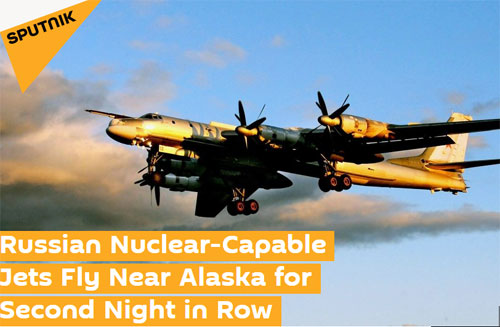 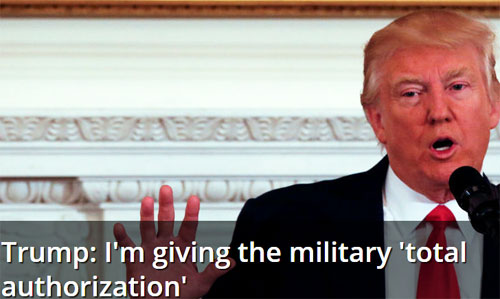 “What I do is I authorize my military”, said Trump in response to a press question about the use of a massive bomb in an assault on Islamic State group positions in Afghanistan. “We have the greatest military in the world, and they’ve done the job, as usual. We have given them total authorization, and that’s what they’re doing. Frankly, that’s why they’ve been so successful lately.”

During the presidential campaign, Trump repeatedly promised to review rules of engagement for U.S. troops in war zones and limit micro-management of military operations by executive branch bureaucrats. 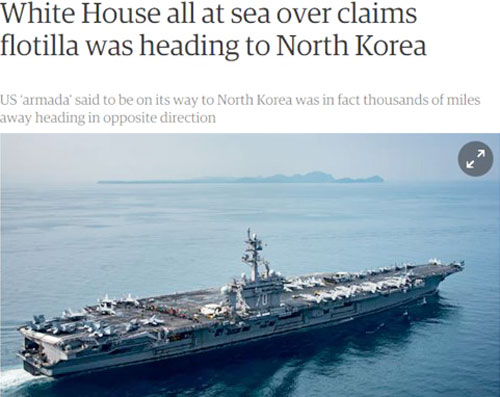 Stephen Lendman, Global Research, April 18, 2017: “Pentagon and intelligence community power holds the Trump administration, Congress and the courts hostage. Diplomacy is inconsequential, for show only. Tillerson has no say over geopolitical policymaking.

With Pentagon commanders and intelligence community bosses in charge of war making and other key geopolitical issues, a potential nightmarish scenario could unfold.”

Articles in the Atlantic and Wall Street Journal discussed Trump’s approach to militarism and war making.

“He’s letting hawkish generals make battlefield decisions – overseen by Defense Secretary Mattis, National Security Advisor McMaster and Joint Chiefs chairman Dunford. Generals always want more funding. No matter the amount budgeted, it’s not enough. Trump proposed an additional $54 billion for the next fiscal year. Inadequate, according to Pentagon commanders”, said the Atlantic. “They complain about Trump’s ‘unpredictability’ even though he’s giving them free reign over battlefield decisions, including drone strikes and special operations missions in countries where America is not officially at war.”

On April 14, the Wall Street Journal headlined Trump Gives Generals More Freedom on ISIS Fight, saying the president “urges them to make more battlefield decisions on their own.” According to the publication, an unnamed senior Defence Department official said: “there is a sense among commanders that they are able to do more – and so they are. Now they’re acting more on their own.” They’re “being encouraged to stretch the limits of their existing authorities when needed, but to think seriously about the consequences of their decisions.”

Also in April, US Forces Afghanistan (USFOR-A) Commander General John Nicholson, Jr. allegedly used the Pentagon’s Massive Ordnance Air Blast bomb (MOAD) on his own. More likely, along with aggression on Syria, it was a Defence Department message to North Korea, Syria, Russia, China, and other US adversaries, indicating America’s willingness to do whatever it takes to achieve military and geopolitical objectives – not part of waging war on ISIS, a US creation it supports.

The Journal cited an unnamed senior administration official, saying Trump didn’t know about MOAB’s use until after it was dropped, adding “it’s not the same as it was. You don’t have to ask us before you drop a MOAB.”

YourNews Wire, April 17, 2017: “President Trump announced that he has given the United States military the ‘full authority’ to strike foreign targets and declare war without the ‘interference’ of elected officials in Congress or the Senate.”

This news comes as top military bosses claim that World War III is “almost guaranteed” and will be “extremely lethal and fast ”(Army Chief of Staff General Mark A. Milley, Defence One, Major General William Hix). Hix also warned that the US is preparing for “violence on the scale that the U.S. Army has not seen since Korea” when over 30,000 American troops were killed.

Lt. General Joseph Anderson said America must face up to frightening threats from “modern nation-states aggressive in militarised competition.” He added: “Who does that sound like? Russia?” He said: “While we’re ready now, we are being challenged. Our Army and our nation must be ready.”

Your News Wire, April 9, 2017: “Russian President Vladimir Putin has issued a direct threat to President Trump, warning him that Russia and Iran are fully prepared to go to war with the U.S. following the US strike in Syria. The two countries say they fully support Syrian President Bashar al Assad, and will respond with ‘full military force’ if Trump commits any ‘further acts of aggression’.”

Impossible, you might say? Just read what Prof. Chossudovsky, Global Research, April 18, 2017 writes: “Our country has had 4 war criminal presidents in succession. Clinton twice launched military attacks on Serbia. George W. Bush invaded Afghanistan and Iraq and attacked provinces of Pakistan and Yemen from the air. Obama used NATO to destroy Libya and sent mercenaries to destroy Syria. Trump attacked Syria with US forces, thereby becoming a war criminal early in his regime.

To the extent that the UN participated in these war crimes along with Washington’s European, Canadian and Australian vassals, all are guilty of war crimes. Perhaps the UN itself should be arraigned before the War Crimes Tribunal along with the EU, US, Australia and Canada.”

There is also a thesis saying that The City of London along with the US and its presidents, are playing their aggressive role against Russia and Putin in order to implement their Satanic technocratic New World Order and the Agenda 21.