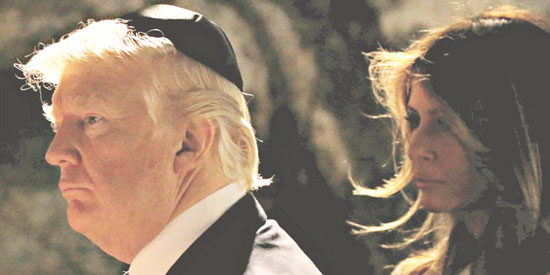 A number of historians have rightly crowned George W. Bush as the worst president in the United States because he led America into the most disastrous event in the history of covert and diabolical operations: the war in Iraq. Jean Edward Smith, a biographer and the John Marshall Professor of Political Science at Marshall University, has written: “Whether George W. Bush was the worst president in American history will be long debated, but his decision to invade Iraq is easily the worst foreign policy decision ever made by an American president.”
Other military historians and scholars such as Andrew J. Bacevich have said similar things.

With the advent of Donald Trump marching American soldiers into an equally disastrous event in Syria, perhaps the time has come to relieve Bush as the worst president in the history of America and to recognize Donald Trump’s accession to the Zionist/Neocon/Israeli throne.

Why? Well, Trump knows more about the debacles in Iraq, Afghanistan, Libya, and Syria more than any living U.S. official. How? Throughout his campaign he launched a flamboyant attack on Bush and the Neocons saying that they have virtually destroyed American life and precious souls in the Middle East by producing one war after another.

In fact, the Alt-Right and a large section of Americans voted for Trump because they believed that he would rescue America and much of the Middle East from the Israeli sinkhole, the Zionist ideology in America, and the Neoconservative movement, which never once framed U.S. foreign policy on a moral platform.

As it turns out, Trump has become a thorough puppet of the Israeli regime and the damage he has done just over one year is almost beyond repair. Trump has recently sent soldiers to bomb Syria because Assad, he said, is using chemical weapons on his own people. The evidence?

Well, what evidence? Has the Zionist regime presented one over the past fifty years or so? Haven’t they been making things up since the beginning of time? And haven’t Americans been ripped off since the Neoconservatives took over U.S. foreign policy?

Americans have exhausted every possibility in order to give Donald Trump a chance to prove himself, despite the fact that he has been talking on both sides of his mouth since he ascended to the Zionist throne. But Donald Trump has morally and politically humiliated himself and the people who voted for him when he decided that another attack in Syria was the way to go.

Not a single U.S. official has presented serious evidence showing that Assad was the main culprit behind the so-called chemical attack. US Secretary of Defense James Mattis has said that the evidence against Assad is there, but “Mad Dog” Mattis hasn’t given any.
On the contrary, Russia again has shown that the White Helmets, which is supported by U.S. officials, was largely behind the attack.

Russia has also presented evidence which suggests that both Britain and America were behind the so-called chemical attack. Ministry spokesman Major-General Igor Konashenkov has said: “Please, notice. These people do not hide their names. These are not some faceless claims on the social media by anonymous activists. They took part in taking that footage. The Russian Defense Ministry also has evidence that Britain had a direct involvement in arranging this provocation in Eastern Ghouta.

We know for certain that between April 3 and April 6 the so-called White Helmets were seriously pressured from London to speed up the provocation that they were preparing.”

In other words, the so-called chemical attack was staged. It was a false flag. Plain and simple. Lord Alan West, a retired officer of the British Royal Navy, had similar thoughts: “It seems to be utterly ludicrous for the military [Assad government] that is in the process of taking over an area to go and do something with chemical weapons, which will draw the wrath of the larger enemy down upon them, If I was advising the opponents of [Syrian President Bashar] Assad, I would be delighted to kill a few people there. Let’s face it, [the insurgents] don’t care if they kill women and children.”
Responding to tweets by Donald Trump accusing Assad, West moved on to say: “I am not willing to accept tweets. We need to see incontrovertible truth about what has happened there and make a decision on that basis.”

Trump could have solved the Syria puzzle by just shutting the political door on Israel and looking at the hard evidence which conclusively shows that Assad has indeed been fighting terrorism since the beginning of time. Trump could have also realized that Assad has been protecting the Christian population as well as other minority groups in the country. Patriarch John X of Antioch and All the East in Syria said: “We condemn recent US public statements and threats to Syria based on mere allegations of using banned weapons. We deplore any possible American aggression on our people that will cause the country and the region to be further devastated.”

In short, by allying with the Israeli regime and the Neoconservative ideology in order to destroy Syria, Trump has found himself in bed with Satanism, which seeks to subvert the moral and political order. In that sense, Trump is seeking World War III in Syria for Israel. Trump is not working for the American people. He is working for a regime which always wants to see blood all over the Middle East and elsewhere.

Israel lost the war in Syria. But Israel didn’t lose their finest puppet in America. So Israeli officials have actually asked for a rematch by sending American soldiers to die for the state of Israel. In other words, Israel is asking for more blood to be spilled, more money to be spent, and more disasters in the region.

Perhaps Jewish political scholar Norman Finkelstein was right when he said that Israel needs to suffer a major military defeat. Russia can challenge the regime, but Russia cannot do it alone because Russian officials seem to fear that they will be placed under the spell of “anti-Semitism”.