As tensions with the US and Russia continue to devolve, the Russian state run media has issued a warning – while mockingly calling out the US – for its citizens to stockpile food and supplies in preparation for war.

A Russian state television news segment on Tuesday, April 10, urged citizens to stockpile non-perishable goods and water as the impending threat of a “catastrophic” conflict with the United States intensified over potential (at that time) western military strikes against the Syrian government.
A newscaster for Russia’s Vesti 24 mockingly told viewers “who succumb to panic and decide to spend all their savings” to stock their bunkers with basic supplies, such as rice, sugar, salt, oatmeal and other products that maintain a long shelf life, as an image of mushroom cloud from a nuclear explosion was shown on the screen behind him. He went on to explain that at least 30 liters of water would be required for drinking water, food preparation, and personal hygiene. 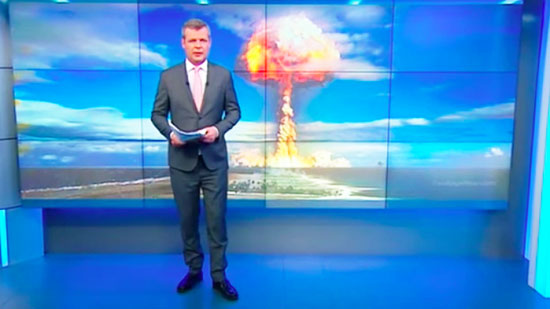 The news anchor then added – in a likely attempt to mock the United States: “It should be noted that real panic isn’t here, but across the ocean”, pointing out that sales of bomb shelters in the United States “took off” after Trump’s election.

Russia and the Syrian government have denied a chemical weapons attack took place, instead claiming the attack had been staged by the White Helmets, a self-purported Syria civil defense group hailed as heroes in the western world, but who many accuse of acting as civil defense for the Islamist rebel groups operating under the auspices of being “moderate rebels”.

On Friday, April 13, Russian foreign minister Sergei Lavrov announced that they have “irrefutable” evidence that a hostile intelligence agency of a foreign government staged the alleged chemical attack.
“We have irrefutable evidence that it was another staging, and the special services of a state which is in the forefront of the Russophobic campaign had a hand in the staging” Lavrov said at a news conference with his Dutch counterpart Stef Blok.

Russia’s Chief of the General Staff of Armed Forces, Valery Gerasimov, warned nearly a month ago that Syrian rebels were preparing to utilize chemical weapons – to be blamed on the Syrian government – as a justification for U.S. strikes on Damascus, and cautioned that “in the event of a threat to our military servicemen’s lives, Russia’s Armed Forces will take retaliatory measures to target both the missiles and their delivery vehicles”.

Trump noted that the US/Russia relationship is “worse now that it has ever been” and scolded Moscow for aligning themselves with “gas killing animal” Bashar al-Assad.

“There is a major war scare here in Moscow. The Russian chief of military Valery Gerasimov promised a response against U.S. platforms launching missiles” Ariel Cohen, a senior fellow at the Atlantic Council, told Newsweek. “The U.S. needs to keep in mind not only the adversarial position of Russia, which of course is the case, but the Russian nuclear potential… An escalation in Syria that affects Russia may lead to a military conflict with Russia, which has an escalation trajectory towards a nuclear war.”

There is a clear disconnection between the more aggressive posture of civilian leadership of the U.S. and the more nuanced approach of the Pentagon, as the Department of Defence is wary of potential escalation of the Syrian conflict into a regional, or potentially even global war that has the potential to go nuclear.

Additionally, while addressing Congress on Thursday, April 12, Defense Secretary James Mattis acknowledged that while he believes chemical weapons were used by the Assad government in Douma, the US has no actual evidence to support this contention outside of “media and social media indicators”.

Reuters reports that Kremlin announced on Thursday, April 12, that the US and Russia were actively using a crisis communications link in an effort to avoid an accidental clash over Syria that could spiral out of control.