In a close encounter with top US CEOs, President Donald Trump told drugmakers at a White House meeting they were charging “astronomical” prices and promised to get better bargains for government health programs, something even Bernie Sanders would agree with. He also said he would focus on finding ways to get new medicines to market faster. 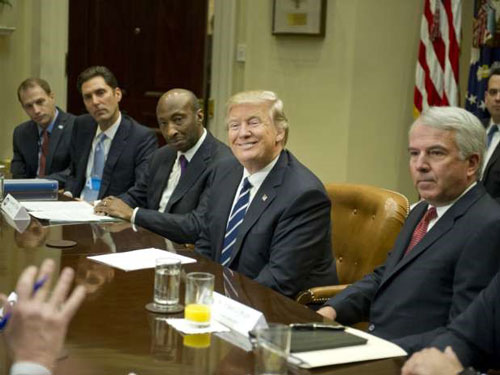 “The pricing has been astronomical”, Trump said to CEOs of some of the world’s biggest drugmakers, who came to Washington after Trump’s criticism of the industry sent drug and biotechnology stocks plunging in January 2017. “You folks have done a very great job over the years but we have to get the prices down.”

At the meeting was Pharmaceutical Research and Manufacturers of America CEO Stephen Ubl, Merck & Co. CEO Ken Frazier, Eli Lilly & Co. CEO Dave Ricks, Celgene Corp. CEO Bob Hugin and others. They embraced Trump’s calls for lower taxes and fewer regulations. The gathering with drug CEOs came after Trump’s said on Jan. 12th, 2017, that the industry was “getting away with murder” and promised to act on drug prices. Since then, drugmakers have turned up their lobbying efforts with Congress as a potentially friendlier force that might counter Trump.

“Some of the policies you’ve come out and suggested I think can help us do more – tax, regulations” said Lilly’s Ricks. Also at the White House meeting were Novartis AG CEO Joe Jimenez and Johnson & Johnson Worldwide Chairman of Pharmaceuticals Joaquin Duato.

Trump has threatened to have the government negotiate prices directly with the industry on behalf of Medicare and Medicaid, which are some of the world’s biggest purchasers of health-care products and services and cover tens of millions of Americans. “Competition is key to lowering drug prices” the president said.

At the same time, Trump promised to slash regulations, get new treatments to market faster at the Food and Drug Administration, and increase international competition. “We’re going to streamline FDA; we have a fantastic person” that will lead the agency soon, Trump said (Scott Gottlieb – a doctor who has close ties with Big Pharma, former deputy commissioner at the agency and partner at a large venture capital fund). Trump also promised to cut taxes on business and lure companies back to the U.S.

As Bloomberg notes, the drug industry is one of Washington’s most powerful, and each year spends hundreds of millions of dollars on lobbying, in addition to being one of the biggest donors to political campaigns, according to the Center for Responsive Politics. On Jan. 23rd, 2017, Pharmaceutical Research and Manufacturers of America also launched an image makeover that featured advertising and public affairs events aiming to convince the public to buy their drugs.