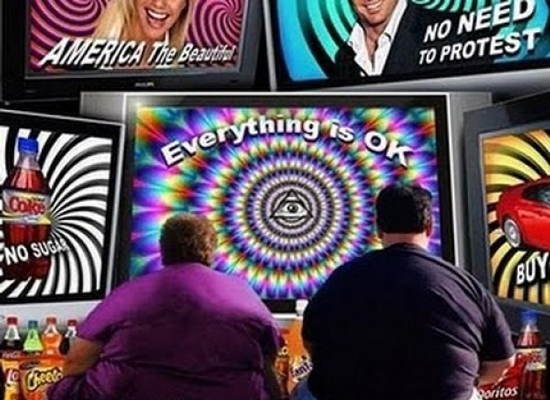 “…in America, we have achieved the Orwellian prediction – enslaved, the people have been programmed to love their bondage and are left to clutch only mirage-like images of freedom, its fables and fictions. The new slaves are linked together by vast electronic chains of television that imprison not their bodies but their minds. Their desires are programmed, their tastes manipulated, their values set for them.” – Gerry Spence, From Freedom to Slavery.

“The problem is not corruption or greed, the problem is the system that pushes you to be corrupt. The solution is not found in the slogan ‘Main Street, not Wall Street’ but to change the system in which Main Street cannot function without Wall Street” – Slavoj Zizek, The Violent Silence of a New Beginning.

To grasp what is going on in the world right now, we need to reflect on two things. One is that we are in a phase of trial runs. The other is that what is being trialled is fascism – a word that should be used carefully but not shirked when it is so clearly on the horizon. Forget “post-fascist” – what we are living with is pre-fascism.

It is easy to dismiss Donald Trump as an ignoramus, not least because he is. But he has an acute understanding of one thing: test marketing. He created himself in the gossip pages of the New York tabloids, where celebrity is manufactured by planting outrageous stories that you can later confirm or deny depending on how they go down. And he recreated himself in reality TV where the storylines can be adjusted according to the ratings. Put something out there, pull it back, adjust, go again.

Fascism doesn’t arise suddenly in an existing democracy. It is not easy to get people to give up their ideas of freedom and civility. You have to do trial runs that, if they are done well, serve two purposes. They get people used to something they may initially recoil from; and they allow you to refine and calibrate. This is what is happening now and we would be fools not to see it.

One of the basic tools of fascism is the rigging of elections – we’ve seen that trialled in the election of Trump, in the Brexit referendum and (less successfully) in the French presidential elections. Another is the generation of tribal identities, the division of society into mutually exclusive polarities. Fascism does not need a majority – it typically comes to power with about 40 per cent support and then uses control and intimidation to consolidate that power. So it doesn’t matter if most people hate you, as long as your 40 per cent is fanatically committed. That’s been tested out too. And fascism of course needs a propaganda machine so effective that it creates for its followers a universe of “alternative facts” impervious to unwanted realities. Again, the testing for this is very far advanced.

But when you’ve done all this, there is a crucial next step, usually the trickiest of all. You have to undermine moral boundaries, inure people to the acceptance of acts of extreme cruelty. Like hounds, people have to be blooded. They have to be given the taste for savagery. Fascism does this by building up the sense of threat from a despised out-group. This allows the members of that group to be dehumanised. Once that has been achieved, you can gradually up the ante, working through the stages from breaking windows to extermination.

People have to be given the taste for savagery. Fascism does this by building up the sense of threat from a despised out-group. It is this next step that is being test-marketed now. It is being done in Italy by the far-right leader and minister for the interior Matteo Salvini. How would it go down if we turn away boatloads of refugees? Let’s do a screening of the rough-cut of registering all the Roma and see what buttons the audience will press. And it has been trialled by Trump: let’s see how my fans feel about crying babies in cages. We wonder how it will go down with Rupert Murdoch.

To see, as most commentary has done, the deliberate traumatisation of migrant children as a “mistake” by Trump is culpable naivety. It is a trial run – and the trial has been a huge success. Trump’s claim that immigrants “infest” the US is a test-marketing of whether his fans are ready for the next step-up in language, which is of course “vermin”. And the generation of images of toddlers being dragged from their parents is a test of whether those words can be turned into sounds and pictures. It was always an experiment – it ended (but only in part) because the results were in.

And the results are quite satisfactory. There is good news on two fronts. First, Rupert Murdoch is happy with it – his Fox News mouthpieces outdid themselves in barbaric crassness: making animal noises at the mention of a Down syndrome child, describing crying children as actors. They went the whole swinish hog: even the brown babies are liars. Those sobs of anguish are typical of the manipulative behaviour of the strangers coming to infest us – should we not fear a race whose very infants can be so devious? Second, the hard-core fans loved it: 58 per cent of Republicans are in favour of this brutality. Trump’s overall approval ratings are up to 42.5 per cent.

Fox News mouthpieces outdid themselves in barbaric crassness: making animal noises at the mention of a Down syndrome child, describing crying children as actors. This is greatly encouraging for the pre-fascist agenda. The blooding process has begun within the democratic world. The muscles that the propaganda machines need for defending the indefensible are being toned up. Millions and millions of Europeans and Americans are learning to think the unthinkable. So what if those black people drown in the sea? So what if those brown toddlers are scarred for life? They have already, in their minds, crossed the boundaries of morality. They are, like Macbeth, “yet but young in deed”. But the tests will be refined, the results analysed, the methods perfected, the messages sharpened. And then the deeds can follow.

The inconvenient truth about cancer and mobile phones