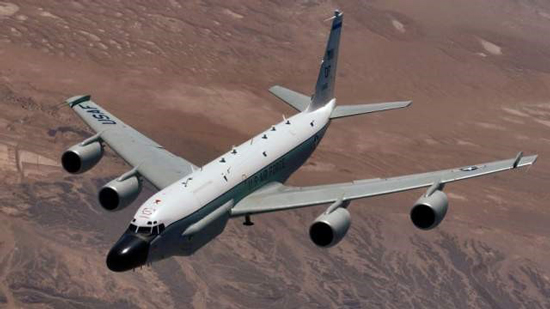 The U.S. is amassing intelligence gathering aircraft off Syria, as tensions rise after the White House and Pentagon accused President Bashar Assad of planning another chemical attack.

Three of the most important spy planes in the U.S. inventory have been gathering intelligence off the Syrian coast over the last week of June (2017), according to plane enthusiasts monitoring air traffic in the region.

According to TheAviationist website, two RC-135 aircrafts and a Navy P-8 Poseidon – which can eavesdrop and pinpoint enemy radio and radar signals – have been “snooping” for hours each day. At the same time, chemical weapons activity was taking place at the Syrian Shayrat air base, the Pentagon said, noting that the base was where the Assad regime’s last chemical attack originated. 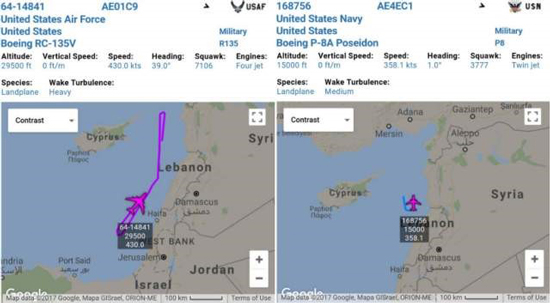 While those spy planes were around, President Assad was visiting Russian troops and jets at the Hmeymim air base near Latakia, apparently in a show of defiance at U.S. accusations. Syria has denied the allegations that it may be preparing a new chemical attack, insisting again that it has never used such arms.

Meanwhile, the American aircraft carrier the USS George H.W. Bush paied a visit to Israel, the first time in 17 years that a U.S. aircraft carrier visited the country. The USS H.W. Bush arrived on July 1 in Haifa port with a crew of about 5,700 sailors and pilots and about 90 aircraft of various kinds, according to media reports.

The massive naval vessel, which was named after the 41st president of the United States, was deployed to the Persian Gulf to serve as a base from which U.S. fighter aircraft have bombed ISIS targets in Syria, Israel’s Channel 2 noted. 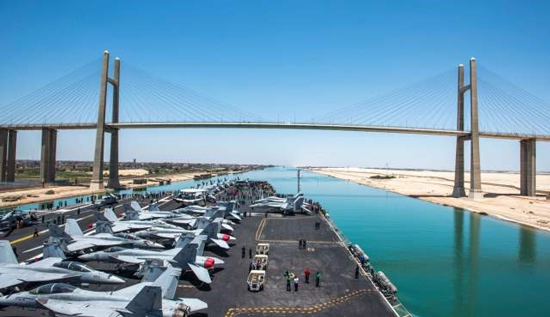 The USS George H.W. Bush spent four days in Israel, the Ynet news website reported, meaning that the American crew was marking America’s Independence Day in Israel on July 4. Due to its massive size, it is too large to dock in Haifa port itself. As a result, the crew was brought on shore by ferries. They then had dozens of buses at their disposal to give them an opportunity to tour the country, Ynet said.