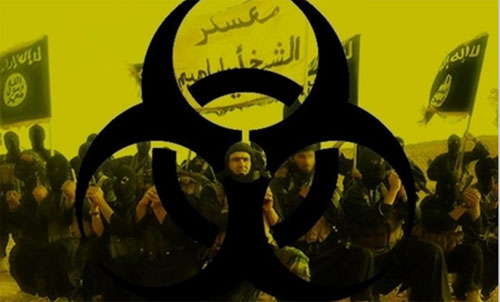 In April 2017, just days after the United States launched 59 Tomahawk missiles at the al-Sha’aryat airbase under the pretext of a response to an extremely questionable “chemical weapons attack,” America has caused its own chemical weapons incident in Syria with an airstrike.

According to the Syrian government, on April 12, the United States struck an ISIS weapons depot in Deir ez-Zor that caused a large plume of yellow smoke, an indication of the presence of chemical weapons.

“The jets of the so-called US-led coalition launched a strike at about 17:30-17:50 [local time, 14:30-14:50 GMT] on a Daesh warehouse where many foreign fighters were present. First a white cloud and then a yellow one appeared at the site of the strike, which points at the presence of a large number of poisonous substances. A fire at the site continued until 22:30 [19:30 GMT],” the Syrian military stated to Russia’s Sputnik.

Syria’s General Staff has stated that the U.S. strike killed “hundreds of people, including civilians” and that hundreds of people were poisoned by the gas that was released as a result of the strike.

“This confirms that Daesh and al-Nusra terrorists possess chemical weapons and are capable of using, obtaining and transporting it,” said the Syrian government document.

This strike comes as the United States continues its campaign against the Syrian government both in the halls of the United Nations and the screens of Western audiences, justifying their own aggressive actions such as the launch of Tomahawk missiles and a series of escalations involving U.S. troop movement inside Syria itself.

If the reports are accurate, the United States has once again revealed its utter hypocrisy in front of the entire world. Needless to say, we don’t expect to see anyone launching missiles at U.S. military bases in defence of “beautiful babies” while admiring their chocolate cake anytime soon. After major provocations in Syria and North Korea as well as safer rattling against Russia on the international scale, the United States is now walking a razor’s edge with the safety of the world’s population.