There are multiple reasons behind the unprecedented anti-Russia propaganda campaign that took place at the end of Obama’s mandate. However, it is the massive and overwhelming war crime spree in Aleppo that the Obama Administration sought to cover up. And it is Russia that possesses all the hard evidence of intentional war crimes and proof of deliberate genocide.

The anti-Russian propaganda has been so relentless because there are no better distraction, diversion, and/or misdirection techniques than those that prop up high a bogeyman. In this regard Russia has always served as “perfect” enemy of the American people. Nevertheless, the Democrat-Republican uniparty currently faces the utter necessity of distracting the electorate from so much pervasive criminal activity at the highest levels of the U.S. Federal Government.

Not only did the Democrats try to steal the election from Donald Trump by fabricating anywhere from 3 to 5,000,000 bogus votes for Clinton, the Democratic National Committee (DNC) secretly conspired with the Mainstream Media (MSM) to rig the entire electoral process.

The extremely incriminating WikiLeaks emails clearly provide evidence of this grotesque subversion of the American Republic and the democratic voting process. The sheer criminality of the Clinton Foundation operations, an illegal CIA-directed NGO, has been documented on the Internet with one data dump after another by WikiLeaks, Guccifer, Anonymous, and various whistle-blowers within national law enforcement agencies. Furthermore, the list of crimes against “We the People” by the political class and abetted by the establishment is actually endless.

Not only has Pizzagate been blown wide open, so has the much larger global “Pedogate” crime syndicate. However, it is Russia that poses the greatest threat to the Anglo-American Axis power structure because of the evidence that Putin’s Kremlin has accumulated over many years. Not only does Putin possess evidence that proves that 9/11 was an inside job, the Russian Federal Security Service (FSB) also has indisputable proof that the U.S. Intelligence Agencies and Special Secret Services created ISIS, as well as Al-Qaeda.

After the unlawful wars in Iraq, the U.S.-fabricated war in Syria represents the greatest war crime spree in American history.
This was not a civil war by any standard or definition; it was a completely unprovoked war of overwhelming aggression by the USA and the coalition of warmongering nations who covertly conspired to conquer Syria. Simply put, they each wanted a slice of the stolen pie.

This coalition of stone-cold war criminal nations purposefully colluded to commit genocide against the Syrian people, as well as cause massive displacement of the indigenous peoples from their ancestral lands. 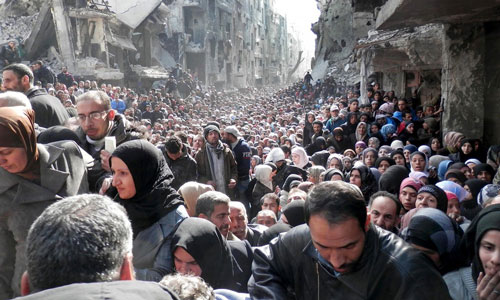 In the conduct of this patently illegal war, the Obama Administration perpetrated the most serious war crimes in modern history throughout the Northern Levant. Not only did Obama & Company (The C.I.A. is also known as The Company in intelligence circles) create and materially support the Islamic State, arm and supply ISIS, and fund and finance ISIL, they used this terrorist organization to wage illicit war against the sovereign nation of Syria. In short, the criminal coalition has repeatedly attempted to unlawfully overthrow the legitimate government of president Bashar al-Assad.

The US-backed ISIS perps and Daesh proxies could not help but commit one war crime after another. All they’ve done is conduct barbaric acts of terrorism wherever their CIA-MI6-MOSSAD handlers have told them to do so. Hence, the entire theater of war has been defined by brutal and savage campaign of terrorism never seen on a modern battlefield. When considered in the aggregate, the U.S. coalition is directly responsible for state-sponsored terrorism in Syria on a scale never witnessed on Planet Earth.

There is now a prodigious body of evidence that both Russia and Turkey have amassed which clearly demonstrates the real scheme of the Western powers. The US military cynically supported the so-called “rebels”, who were recruited (and bribed handsomely) from Wahhabi communities around the Mideast and transported to the Syria battlegrounds. In this way the US government funneled billions of dollars in arms and armaments, munitions and supplies to the rebels, who provided them to Al-Qaeda, and then to ISIS.

No, this was not a civil war by any means; it was a violent revolution designed and engineered in Washington, London and Tel Aviv to set the stage for a coup against the democratically elected president Al-Assad. 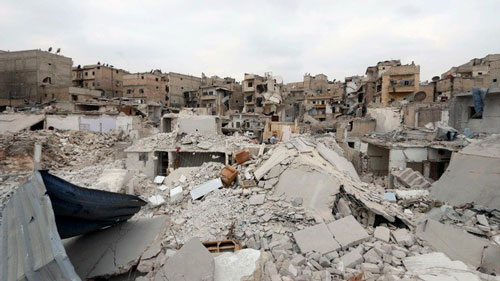 The destruction in Aleppo

Aleppo: The moment of truth has arrived

There are very good reasons why the Russia-bashing is now reaching a crescendo.
One of the main reasons is Aleppo.

Now that Russia and the Syrian Government have successfully liberated Aleppo, the extent and seriousness of the incomparable war crimes are becoming known.
The depth and breadth of the American, British and Israeli war crimes in Aleppo is both staggering and unrivaled. It was, after all, fundamentally a Zio-Anglo-American war plan that was executed with the vital assistance of Secretary of State Hillary Clinton in 2011. In fact, the military conquest of Syria was just another of several CIA-coordinated color revolutions that were undertaken according to President Obama’s Presidential Study Directive-11, a blueprint for the manufactured Arab Spring.

Now that Russia’s military operation to save Assad and the Syrian people from the proxy armies of the Anglo-American Axis (AAA) has been completed, the dust is settling quickly. As it settles, the numerous horrific war crimes are coming to light. The participating AAA countries bear direct responsibility for each of these war crimes and may soon be held accountable by a new international body, not too unlike the Nuremberg trials.

Of all the population centers in the Northern Levant, it is Aleppo which was brutalized the most. The pattern of war crimes was such that the US-backed terrorists would kill the civilians mercilessly without provocation as they destroyed their homes and businesses without any justification. After different phases of this unrelenting death and destruction, the CIA-directed rebel terrorists would then bomb a hospital and quickly blame it on the Russian military or Syrian government, even before it could be properly investigated.

This exact stratagem played out over and over whereby agents of the Western powers would carry out the false flag terror operations and then accuse Putin and Assad. After the final tally of cruel death and wanton destruction has been taken, the AAA leadership will be held accountable for crimes against humanity, genocide, as well as a litany of egregious war crimes.

This rapidly evolving predicament is the primary reason for so much false propaganda being generated by the MSM across the planet. The Zio-Anglo-American sponsors of the Syrian war are so guilty of so much murder and mayhem that their only way out is to blame the parties that stepped in to stop the carnage. The more Russia intervened in the Syrian theater of war, the more they got bashed by the English-speaking media, and the more Putin was demonized by the MSM. 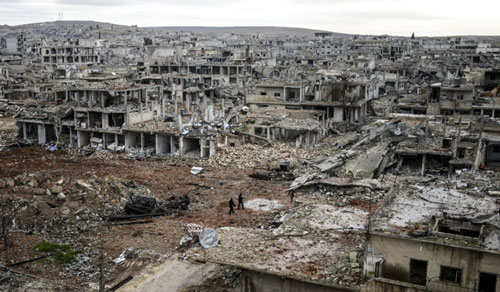 An official in the Syrian regime: the estimated cost of destruction in Syria is $250 billion

It’s a quite common tactic by a criminal aggressor to blame the victim(s). Criminally insane psychopaths do this routinely in order to escape blame for their many odious crimes. When rogue governments do this, they enlist all the sociopaths and psychopaths they can assemble to carry out the fake blame game agenda.

The MSM organs of propaganda have been in overdrive for months in anticipation of this moment of truth. They now host one US government official after another who spout nothing but lies against Russia and falsehoods toward Putin. These homegrown American agents of disinfo, misinfo and false info only know how to prevaricate and mislead. That’s what the United States is experiencing today.

The Obama Administration, in collusion with the DNC and MSM, have willfully perpetrated serious high crimes of treason and sedition against the Republic. The public was distracted from these high crimes and felonies by the propaganda campaign against Russia. The powers that be know that, absent an alien invasion from outer space, they have no other way out… except an engineered stock market collapse that would throw the world community of nations into even more chaos. And even this option has been recently closed to them.

Big Pharma and the ADHD Industrial Complex: A Review of ADHD Nation