Big Pharma and the ADHD Industrial Complex: A Review of ADHD Nation 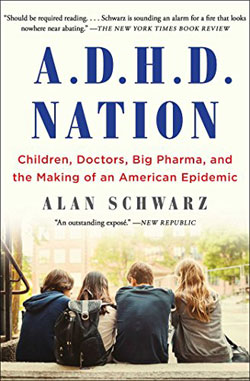 Approximately 11% of children 4-17 years of age in America (6.4 million) have been diagnosed with ADHD as of 2011 and the number continues to increase every year. Many believe the US children are facing an unprecedented epidemic in regards to ADHD.

Alan Schwartz’s new book ADHD Nation: Children, Doctors, Big Pharma and the Making of an American Epidemic should be required reading for parents, teachers, and doctors everywhere. This book manages to be informative both historically and scientifically, while also being entertaining. Schwartz dismantles the ADHD “epidemic” by showing how the creation of a drug spurred a medical condition, not the other way around.

Anyone who has taken an ADHD survey for themselves or their children knows how tricky these assessments can be. With questions like “Does your child have difficulty listening?” and “Does your child misplace or lose items (i.e. homework or school supplies)?” absolutely every child (or adult!) will fall into that category.

While reputable doctors agree that ADHD is a legitimate condition in a small percentage of the population, Schwartz shows how more than 1 in 7 people will test “positive” for ADHD in their lifetime. Some estimates show that more than 50% of people who visit a psychiatrist will be prompted to take some form of medication to treat the symptoms of ADHD.

Schwartz’s book presents a detailed look at the “father of ADHD”, Dr. Keith Conners, a man who was at first thrilled to see such amazing results in his child patients who were treated with Ritalin. Many years later, however, Conners calls the overprescription “a national disaster of dangerous proportions”.

What’s great about ADHD Nation is that it sends up a red flag without being alarmist – Schwartz acknowledges how and when drugs like Ritalin can be beneficial. He shows case studies where the drug is extremely valuable. He’s not claiming that the US Government is trying to exercise mind control over the most vulnerable members of the American society. What he is saying is that overprescription of ADHD drugs is a serious problem indicative of larger societal issues with money, the medical community, and the American approaches to raising children. Even for readers without children, this book provides an excellent in-depth look at how prescription medications shape and change our society.