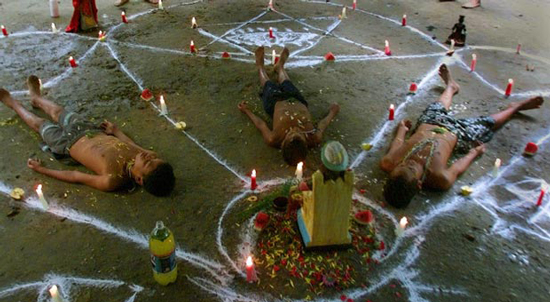 A United Nations watchdog has warned this summer the United Kingdom about the epidemic of British elite pedophiles trafficking children into the country to be used in “Voodoo sex ritualsˮ.

The United Nations Committee on the Rights of the Child (CRC) has warned Britain that wealthy secret society members are kidnapping children from abroad to be sexually abused, and often “sacrificedˮ, in Satanic or Voodoo ritualistic ceremonies.

Kirsten Sandberg, the head of the CRC and a former Norwegian Supreme Court judge has urged the people of the UK to do more to stop this brutal form of child sex trafficking, saying: “We’re concerned about reports that hundreds of children have been abducted from their families in Africa and trafficked to the UK, especially London, for dark occult rituals. They are used in so-called voodoo ceremonies, and are also raped and sexually abused. The number of convictions is extremely low.ˮ

According to The Times, hundreds of boys and girls have been kidnapped and brought to the UK for religious rituals, with thousands more being smuggled in for sexual exploitation and slavery, the UN report said. Police have recorded scores of cases over the past decade of children who have faced torture and abuse as part of witchcraft and elite ceremonial rituals. Among them, was that of Victoria Climbié, the eight-year-old girl who was brought over from Ivory Coast and killed in 2000 by relatives claiming she was a witch.

A year later, police found the dismembered corpse of a Nigerian boy in the Thames, believed to have been used in a ritual. And in 2010 15-year-old Kristy Bamu died after being tortured by his sister and her partner, both originally from the Democratic Republic of Congo, who claimed that he was cursed.

Ms. Sandberg’s report said that child trafficking for rituals was part of a wider problem, with thousands of minors brought into Britain every year for sexual exploitation and labor.

The CRC comprises 18 independent experts who monitor the implementation of international treaties concerned with children’s rights. It said that Britain should “strengthen the capacity of law-enforcement authorities and judiciary to detect and prosecute trafficking of children for labor, sexual and other forms of exploitation, including for religious rituals”.

The committee also expressed concern about British pedophiles who prey on children abroad. “There are continued reports that United Kingdom citizens, including some convicted sex offenders, set up charities or travel abroad, where they sexually abuse children,” said Ms. Sandberg. She said that South-East Asia – mainly Cambodia and Thailand – was a favored destination and that orphanages were a source of victims.

The committee called for measures to strengthen identification, investigation, and prosecution of British citizens involved in such crimes abroad, and for travel bans on convicted and alleged abusers. The British government said that newly-introduced orders could be applied to people convicted or cautioned for sex offenses, and against those deemed to pose a risk of sexual harm even if they have never been convicted. They can restrict an individual’s Internet use, travel abroad, or time spent with minors.

A national group led by the Home Office is set to monitor how the police and other agencies can better identify and combat sexual offending. Norman Baker, the crime prevention minister, said: “The UK has some of the toughest powers in the world to deal with sex offenders and we are giving police even more tools to protect children at home and abroad. Our two new civil prevention orders will make it easier to restrict the movement and activities of anyone who poses a risk of causing sexual harm to children and adults – not just those who have been convicted of sexual offenses.ˮ

He also said that the National Crime Agency has more resources this year to track child sex offenders and was working closely with police forces in Britain and abroad.