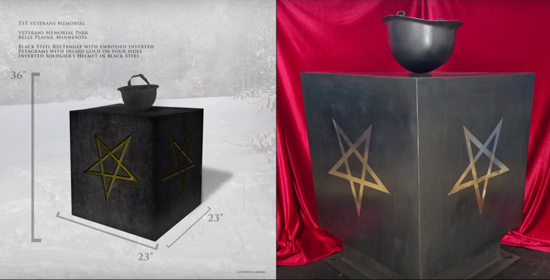 The NWO is Satanism – the ancient rebellion of Satan and his followers against the Creator (Isaiah 14:12-14, Rev. 12:12). By the day, Satan’s power becomes more and more evident – a process which began with the Illuminati on May 1, 1776. In 1781 they took command of the Masonic lodges of the world at the Wilhelmsbad Conference (Germany).

In May 2017, a Satanic monument was approved for display in a veterans memorial park, in Belle Plaine, Minnesota. The monument, a large black steel cube engraved with a golden inverted pentagram topped with an upturned soldier’s helmet, is the first such monument approved for display on public grounds in the U.S.

“The best way that Satan can accomplish his mission of luring souls into damnation is to erode the horror, the natural horror, that men have of the devil”, said Robert Ritchie, director of America Needs Fatima, in an interview with The Daily Caller News Foundation.

“Once that natural horror is eroded, the devil has a better chance of having people accept his presence. So our job as Christians is to remind people of the truth that they already know – that Satan is our ultimate enemy who wants our ultimate failure in life and who wants to destroy the purpose of life which is to correspond to God’s plan for each person and to go to Heaven. And the devil wants people not to live according to God’s plan and wants them to go to Hell”, Ritchie said.

The co-founder of The Satanic Temple, Lucien Greaves, said in an interview with The New York Times, eroding man’s horror to Satan is one of the goals of installing the monument.
“We wouldn’t be doing this if it didn’t mean something to us” Greaves said. “The more we do these types of things, the less shocking this will be as time goes by.”

The Satanic monument’s approval garnered little controversy and no pushback from the Belle Plaine city council, according to Greaves.

Ritchie told The DCNF that The Satanic Temple’s activity in Belle Plaine was not surprising, given their national campaigns to push for attention, like the dozen After School Satan Clubs the temple tried to establish in elementary schools across the nation to counter after school Christian clubs.

“The devil is bad business”, Ritchie said. “Every time the devil is accepted, mankind is the loser, because he’s only capable of doing evil. The more accepted he is, the more evil he will bring to us. And that’s why it’s important to pray against it.”

So what is Satanism?

Satanism is a religious belief – which today is widely respected – contrary to the proven knowledge of Christ being a Godly being. First and foremost it is war on Jesus Christ and his teachings. Satanists know very well that God exists. But they have chosen God’s opponent, Satan, who rebelled against God, and whom they call Lucifer in Masonic circles.

The Illuminati imagine Adam and Eve to have been liberated from the Creator, even supposing that Lucifer was the Creator and that they themselves are evolving into gods.
Satan is the incorporation of human nature – and his gospel is: “Do as you please. You have no immortal soul – you are just an animal with animal needs”.

The teachings of Christ is the opposite: “If any man will come after Me, let him deny himself, and take up his cross, and follow Me. For whosoever will save his life shall lose it: and whosoever will lose his life for My sake shall find it.
For what is a man profited, if he shall gain the whole world, and lose his own soul? Or what shall a man give in exchange for his soul?”.

The choice is easy for some people: they choose Satan’s gospel – and most of them do it unwittingly.
Choosing Christ requires a firm faith – which today can actually be exchanged for knowledge!
Satanism is not only witch-Sabbaths in a dark forest with conjuring nonsense-formulas.
Today Satanism is unwittingly exercised by the public in so-called festivals.
The fact is that the elite ruling the world today, Masons, the City of London (Satanists), the Vatican – even leaders of some churches are Satanists/Luciferians and worshippers of the “Babylonian mysteries”.

And via them Lucifer has taken control of the world in East and West.
How did Lucifer manage to do that?

Here’s a quote from Henry Makow: “Essentially our perception of reality has been changed so we mistake evil for good, and embrace our own destruction. This is Satanism, inversion of all values.

By evil, I am referring to Zionism, globalism, feminism, liberalism, abolition of Christianity, gender, sexual and family degeneracy, Communism, Cabbalism (Jewish Satanism). Protocol 16 says society will be inducted into ‘our faith’.”

Following are excerpts from Edward Griffin’s 1986 interview with Yuri Bezmenov, who defected to the US in 1970 from Soviet Russia.

Bezmenov explained that liberals, “social justice warriors” and antifa (anti-fascist groups) will be lined up and shot because, when they realize they have been duped, they will represent a threat.

He says that once people are brainwashed, you cannot make them see the light until they are made to suffer. This certainly applies to most liberals and Jews today.
Another point of interest, Bezmenov says the USSR was sustained by Western governments, banks and corporations, (i.e. central banks) which means the West is already subverted. This is the Deep State.

Bezmenov explained: “But in reality, the main emphasis of the KGB is not in the area of intelligence at all… only about 15 % of time and money are spent on espionage as such. The other 85% is a slow process which we call either ideological subversion, or active measures, (activitia perionachia, in the language of the KGB), or psychological warfare.

What it basically means is to change the perception of reality of every American to such an extent that despite the abundance of information no one is able to come to sensible conclusions in the interests of defending themselves, their families, their community, and their country. It’s a great brainwashing process which goes very slow and is divided into four basic stages.

It takes from fifteen to twenty years to demoralize a nation. Why that many years? Because this is the minimum number of years which requires to educate one generation of students in the country of your enemy exposed to the ideology of the enemy. In other words Marxist-Leninism ideology is being pumped into the soft heads of at least three generations of American students without being challenged or counter-balanced by the basic values of Americanism, American patriotism.

For example, your Leftists in the United States, all these professors and all these beautiful civil rights defender, they are instrumental in the process of subversion, only to destabilize the nation.

So, basically, you in America are stuck with demoralization.
The result?
Most of the people who graduated in the sixties, dropouts or half-baked intellectuals are now occupying the positions of power in the government, civil service, business, mass media, educational system.

You cannot get rid of them. They are contaminated.
You cannot change their mind even if you expose them to authentic information. You cannot change the basic perception and illogical behavior. In other words, with these people, the process of demoralization is complete and irreversible. To rid society of these people you need another twenty or fifteen years to educate a new generation of patriotically-minded and, and common sense people who would be acting in favor and in the interests of United States society….
Most of it is done by Americans to Americans, thanks to lack of moral standards.

This time, the subverter does not care about your ideas. This time, and it only takes from two to five years to destabilize a nation, what matters is essentials, economy, foreign relations, defense systems.

It may take only six weeks to bring a country to the verge of crisis. You see it in Central America now. And after crisis, with a violent change in power, structure, and economy, you have the period of so-called…

…that will last indefinitely. Normalization is a cynical expression borrowed from Soviet propaganda. When the Soviet tanks moved into Czechoslovakia in ’68, Brezhnev said, ‘now brother Czechoslovakia is normalized’.

Most politicians, media, and educational system frames another generation who think they are living at the peace time. False. The United States is in a state of war against the basic principles and the foundations of this system.
And the initiator of this war is not comrade Andropov of course. It’s the system. However ridiculous it may sound, the world today is a Communist system, the world is a Communist conspiracy.” 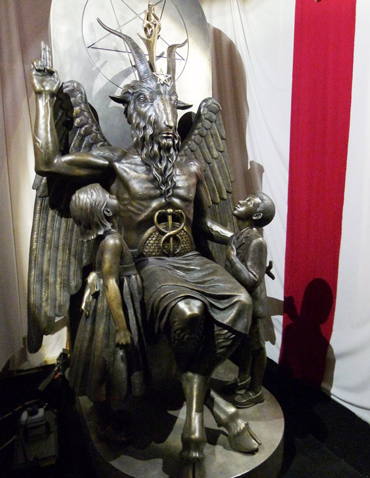 A one-ton, 7-foot (2.13 m) bronze statue of Baphomet – a goat-headed winged deity that has been associated with Satanism and the occult – was displayed by the Satanic Temple during its opening in Salem, Massachusetts, U.S.

As a spirit without creative power, Satan/Lucifer is per se powerless on this planet. When he is so mighty, having temporally been given the real power over this world (John 14:30) it is due to his influence on God-created but apostate humans.
In fact Lucifer has influenced some groups of humans so vigorously that they have become his fanatic servants, believing they are to be the rulers of the world on behalf of their infernal master.

When one wants to know who these groups are, one just has to read their plan and see their deeds:
– The Protocols of the Wise Elders of Zion;
– Albert Pike’s and Carr’s plan for WW3;
– Masons’ who promote destructive Muslim mass immigration as well as their scandalous behavior at Bohemian Grove;
– their top Masonic globalist meetings.

Their common “god” is Lucifer. The owl is the symbol of wisdom – but the “cremation of care” to this owl in the shape of a mock baby has a sinister resemblance to the ancient sacrifice of children to Moloch/Baal – so often described in the Old Testament.

By the way, this occult owl is also seen on the 1-dollar bill. 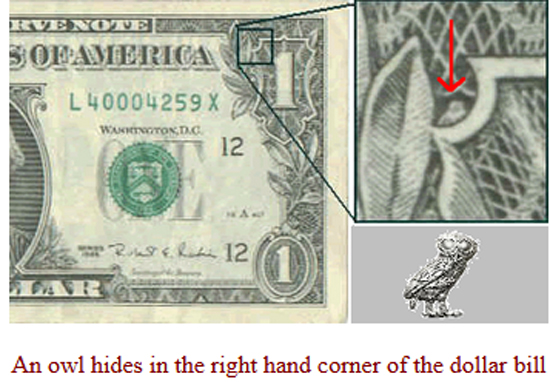 Even today sacrifices of human babies to Satan is described by witnesses.

Today’s world and its inhabitants are largely exposed to Masonic Lucifer influences, without their knowledge, due to their ignorance and self-complacency.

Mankind has been told by Lucifer’s priests, the Jewish Communist Frankfurt School and its 1968 sex-revolution pupils in the media that man is just an animal with no eternal soul!