The NATO war preparation against Russia, Operation Atlantic Resolve, is in full swing. 2,000 US tanks are being sent these days from Germany to Eastern Europe, and 1,600 US tanks are deployed to storage facilities in the Netherlands. At the same time, NATO countries are sending thousands of soldiers in to Russian borders.

According to US Army Europe, 4,000 troops and 2,000 tanks arrived in three US transport ships to Germany in January 2017. From Bremerhaven, US troops and huge amount of military material were to be transported to Poland and other countries in Central and Eastern Europe.

USA is sending to Russian borders 3rd Brigade of the 4th Infantry Division. Overall, more than 2,500 pieces of cargo were shipped to Germany, where they were unloaded in the period January 6-8. US military material and troops then continued to Poland by rail and military convoy’s. Massive US military deployment was ready before the end of January 2017.

“Some 900 cars with military materiel will be transported by train from Bremerhaven to Poland. There are also about 600 pieces of freight that will be transported by train to Poland from the military training ground at Bergen-Hohne. Nearly 40 vehicles will travel directly by road from Bremerhaven to Poland”, told Bundeswehr press office before the deployment started. 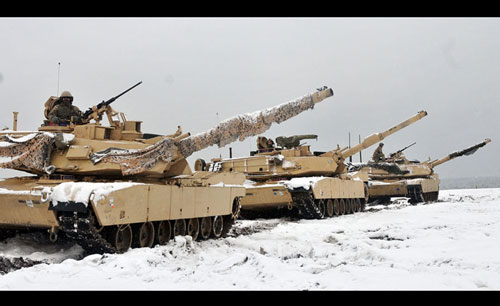 “Three years after the last American tanks left the continent, we need to get them back”, said Lieutenant General Frederick “Ben” Hodges, commander of US forces in Europe. He made the statement during a visit to the Logistics School of the Bundeswehr in Garlstedt, Lower Saxony, in December 2016. He told journalists that the measures were a “response to Russia’s invasion of Ukraine and the illegal annexation of Crimea”. 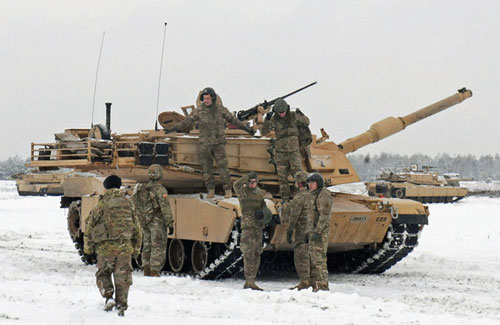 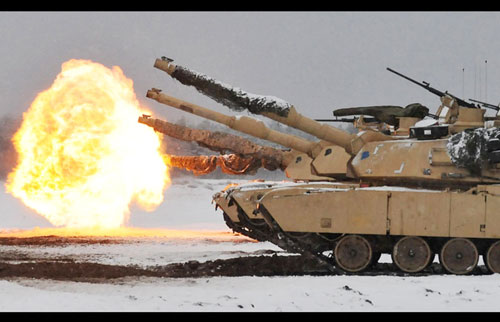 In the dangerous escalation against nuclear-armed Russia, which poses the danger of a Third World War, the German Bundeswehr is playing a central role. “Without the support of the [German] Army, we can go nowhere”, Hodges said during an appearance at the Joint Support Service of the Bundeswehr.

Germany, which rolled over Eastern Europe in its war of extermination 75 years ago, is preparing to send combat troops to the Baltics. 26 tanks, 100 other vehicles and 120 containers will be transported by train to Lithuania. Germany will also send the 122nd Infantry Battalion.

At the same time a total of 1,600 US fighting vehicles are due to be stored at a six-warehouse complex in the southeastern village of Eygelshoven, near the Belgian and German borders. The Eygelshoven facility was originally opened in 1985 during the Cold War, when it was used by US troops to practice drills in case of a possible Soviet attack, according to RT News.

Abrams Tanks, Bradley Fighting Vehicles and Paladin artillery have already started arriving in what is part of a $3.4 billion Congress-approved scheme to increase NATO military capability in Europe. Storage sites are also planned to be reopened in Poland, Belgium and Germany.