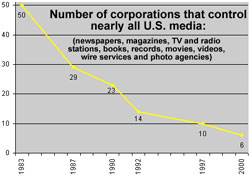 Ever wonder why and how major media can cover up enormous scandals about vaccines, Benghazi, the creation and funding of ISIS, the complicity of the federal government in drug trafficking, the failure of the $2 trillion war on poverty, the private Federal Reserve banking cartel?

Identical parrot-like reporting, on so many major news stories, across the board, now requires the cooperation of only six companies.

To put it another way, there is ironclad agreement to cover up the truth.
There are two dominating wire services which feed all these news outlets:Associated Press and Reuters. The Associated Press is a non-profit owned by TV, radio, and newspaper outlets in America, many of which outlets, of course, are in turn owned by the big six companies.

But… the six companies controlling US media have a monumental problem. They’re a clumsy, slow-moving, complacent giant. Time and time again, they fail to perceive their own preposterous flaws. Even with CIA assets on board, tailoring stories, and shrinking down points of view, this giant has become exceedingly vulnerable to so-called alternative media. 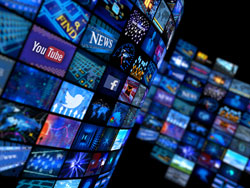 Ordinarily, when faced with such alternatives, a giant invents controlled opposition and portrays it as “the rebel”, when in fact it’s simply a watered-down version of the mainstream. But in this case, there are too many independent media outlets and reporters to control.

The big six shapers of mass reality are becoming prisoners of their own game. Increasingly they’re being recognized as fabricators of information-bubbles that often bear little or no resemblance to what is actually going on in the world.

Perceptions are changing. What was once a hugely convincing mural painted on a wall a hundred miles long, avidly watched by populations and accepted as Reality, is now seen as a series of self-referring interlocking data packets, disconnected from true news about the men who are literally stealing the planet.

Indeed, these big six companies are allies of the thieves. They are in the Club.
Once this is understood, the decline of big six credibility is unstoppable.

The big six create caricatures of political leaders (who are already caricatures), handpick experts who will confirm a story’s pre-selected bias, telescope events into a few details that misdirect the public, pretend a consensus exists when it doesn’t, slide by with generalities and worn out homilies, and even at this late date expect to be believed.

As these strategies are more widely understood, the decline of big six credibility accelerates.
The big six do everything in their power to give the audience a theatrical presentation of the news, while trying to make it appear there is nothing theatrical about it.

As this is seen, their credibility becomes a joke.

“And now, for our top story tonight, we go to (field reporter) in (distant city).”
The field reporter knows nothing of consequence about the city he’s in, nor has he searched out a single item about the story himself. He may as well be speaking from a network studio in New York. And, by the way, his information is actually centered in New York. It consists of incoming wire service reports, phone conversations with government PR people, updates from biased law-enforcement officials…

Lights, camera, action.
Let the farce begin.
But the show is closing.