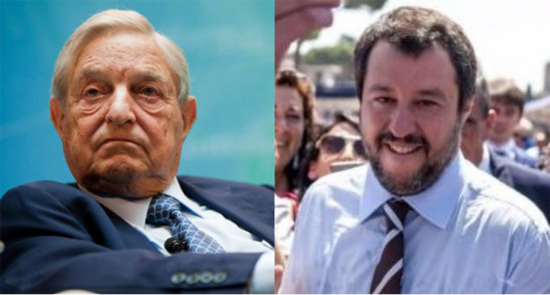 A feud has broken out between liberal billionaire activist and fervent Clinton supporter, George Soros, and Italy’s anti-immigrant League party, which in June (2018) formed a populist movement in coalition with the 5-Star party, and whose leader Matteo Salvini stepped into his new job as Deputy Prime Minister and Minister of the Interior, pledging to deport hundreds of thousands of illegal immigrants.

Salvini’s League and the 5-Star Movement struck a deal on a coalition government which will work towards “putting Italians first” (and potentially making life for Europe a living hell with the ongoing threat of Quitaly (Italy exiting the EU), which according to JPMorgan may be Rome’s best outcome), ending a period of market volatility and political chaos.

In response, George Soros flipped out, openly suggesting that Salvini might be financed by Vladimir Putin, saying he is “very worried about Russia’s influence on Europe in general and on the new Italian government”.
“I do not know if Salvini was funded by Moscow, but the public has a right to know” said Soros.

Soros translated: Any government who puts their citizens ahead of migrants is now a Putin puppet.
The League’s economics policy chief, Claudio Borghi hit back against Soros, stating: “Soros worried by the Italian government? Then it means that we are going in the right direction… We understand that those who have speculated for years on the skin of immigrants, financing NGOs and smugglers to invade Italy.
The wind has changed for [Soros] and for all those who have profited from the deaths of hundreds of people.”

Soros also admits in Italy’s Corriere della Sera newspaper that the League’s growing influence is a reflection on “Europe’s flawed migration policies that imposed an unfair burden on Italy”. His solution? Instead of resettling the migrants, the EU needs to pay Italy.

“It follows from the voluntary principle that the problem… cannot be addressed by forced resettlement, but only by the EU financially compensating Italy for the migrants that land there”, wrote Soros, who also warned “There is a strong inclination in Europe to use the occasion [of the new government] to teach Italy a lesson… If the EU follows this line, it will dig its own grave by provoking a negative response from the Italian electorate, which would then re-elect Movimento 5 Stelle and Lega Nord with an increased majority”.

Italy is far from the first European nation to reject Soros’s open border ideology.
Most markedly, Hungary’s prime minister, Viktor Orbán, based his successful re-election campaign this year on attacking a supposed “Soros plan” to flood Hungary with Muslim migrants. In his opinion piece, Soros rubbishes the accusation as “false and ridiculous”. He said: “Forcibly relocating [migrants] to other countries is neither possible nor desirable. Other countries, particularly Poland and Hungary, would strenuously resist… I have always advocated that the allocation of refugees within Europe should be entirely voluntary.” – The Guardian.

Poland and the Czech Republic have also notably resisted Soros’s policies.
Ironically, the globalist establishment’s stiff resistance against Salvini and Europe’s populist wave (which swept across Slovenia where the anti-immigration SDS party soundly won the local elections) continues to backfire, and as Bloomberg reports, public support for the League strengthened as polls showed Salvini’s party narrowing the lead of its ally, the 5-Star Movement, to less than 2%.

Support for the anti-immigrant League grew to 28.5 percent, compared with 17.4 percent of votes received in March 4 general elections, according to an Ipsos poll published on June 2, in Italian newspaper Corriere della Sera. Luigi Di Maio’s anti-establishment 5-Star saw its support fall slightly to 30.1 percent from 32.7 percent of ballots on March 4, according to the poll.

And with Italy set to send back hundreds of thousands of immigrants to neighboring liberal European countries, we can only wonder how an “enlightened” and “progressive” Europe will get along with their new migrant residents the next time the global economy coughs up a hairball and people start to pay closer attention to where their tax dollars are going.