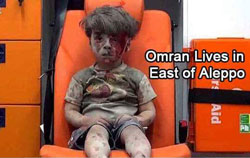 If it is not Baby Aylan, it is little Omran. The Western mainstream media and their outlets will seize upon any tragedy, regardless of who is at fault or what actually caused it, in order to promote war against Syria. For those who are easily swayed by such sad photographs and videos, ask yourself, “Why does the media care more about some stories than others? Why do they care more about some children than they do about other children, some of whom are suffering more than those whom they choose to showcase?”

Western media has ignored thousands and thousands of children who have been killed in this Western-backed war against Syria. The children in Ekrima school in Homs, for instance, were killed by twin car bombings conducted by “moderate” rebels, which destroyed the school and killed the children who were gathered there, singing the national anthem in order to start the day. The only thing these children were guilty of was going to school.

All of this means nothing to the Western mainstream media. Many Syrians, many children in fact, have been killed in Aleppo by gangs that are classified by the United States and the West as “moderate rebels”. These groups go by the name of Noureddine al-Zenki, Ahrar al-Sham, and Jaish al-Islam, etc. But not a word from the media about the children who were victims of these groups. 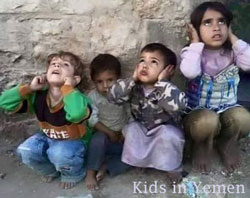 Not only that, but there are children being killed every day in Yemen. They are being killed by Saudi Arabia, a close friend of the United States and the West. Is this not important to the mainstream media? Are these children not worthy of reporting? Why?
Is it true that only two children amongst the tens of thousands are worth talking about?
To the Western public, you must ask yourselves these questions. Why do you feel pity for two children but not for ten thousand children? Why do you use only one eye when God gave you two?

Your media and the governments working behind it are allied with terrorists, supporting them every inch of the way and helping them create more victims. Your media is al-Qaeda’s film crew.

For the sake of the world, as well as the sake of your own country, you must demand that your media stop acting as the voice of terrorism and that your government end its war of aggression against Syria.