Why Is Our Planet Shaking So Violently All Of A Sudden?

At the end of 2016, there have literally been dozens of significant earthquakes in the US, right along the Ring of Fire, and two giant ones made headlines all over the globe on December 8th. First, a magnitude 6.5 earthquake struck off the coast of Humboldt County, California, and that was followed later in the day by a magnitude 7.8 earthquake in the Solomon Islands. But of course these latest earthquakes are just few examples of increased shaking along the outer perimeter of the Pacific Ocean. 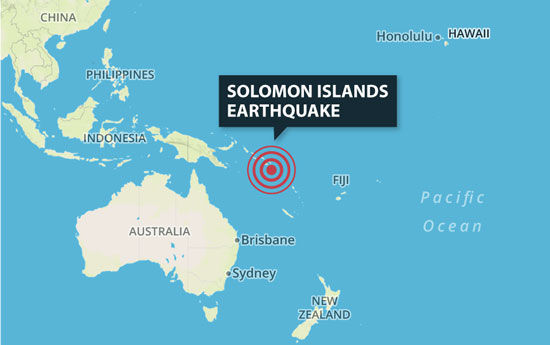 Experts are not quite sure what to make of all of this shaking, but they are warning that “the Big One” could strike the west coast at literally any time.

Let’s start by discussing the historic earthquake that hit the Solomon Islands. According to the Washington Post, it was originally determined to be a magnitude 8.0 earthquake before being downgraded to a 7.8…

“A massive earthquake erupted along a fault line near the Solomon Islands in the southwest Pacific Ocean on Thursday (December 8th, 2016). The quake was originally detected as a magnitude-8 by the U.S. Geological Service, but has since been reduced to a 7.8 on the Moment-Magnitude scale.

It was followed by a 5.5-magnitude quake, and aftershocks continue to roll through.”

Subsequently, that earthquake was followed by 20 extremely large aftershocks that all fell into a range between magnitude 4.8 and magnitude 6.5. All of this violent seismic activity seems to have shook the entire planet to at least some degree, because monitoring stations all over the world were experiencing strange “vibrations” as aftershock after aftershock shook the Solomon Islands.

Prior to all of this shaking in the Solomon Islands, a magnitude 6.5 earthquake off the coast of California rattled residents of Humboldt County.

Fortunately the quake was far enough offshore that not a lot of damage was done, but it is being reported that those living in the region could feel the ground rolling in that day.

Bonnie Brower, owner of the Ferndale Pie Company, told The Associated Press she was grabbing something from the fridge in the restaurant’s kitchen when the quake happened. She didn’t see any damage, but said says felt a “big jolt.”

“I just felt this very huge jerk and I didn’t know what it was” Brower said to The AP. Afterward, it felt like the ground was rolling, “like you were on a boat.”

In recent months there has been a lot of earthquake activity along the west coast of the US, and this has raised fears that “the Big One” could be coming soon.

Fox News reported that a major study has concluded that it is likely that someday the 800-mile-long San Andreas fault “could unzip all at once”.

“For years, scientists believed the mighty San Andreas – the 800-mile-long fault running the length of California where the Pacific and North American plates meet – could only rupture in isolated sections.

But a recent study by federal, state and academic researchers showed that much of the fault could unzip all at once, unleashing a rare, singular catastrophe. Now, insurers have used that research to come up with a new analysis of the damage that could be caused by statewide break of the San Andreas.” 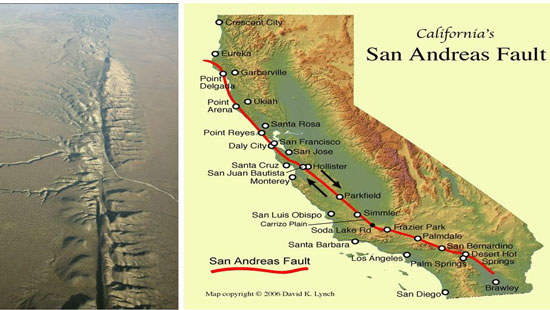 But because things have been so quiet in California for the last several decades, most people living in the region seem to greatly underestimate the threat.

Those living on the west coast have been hearing the same warnings year after year, and many of them have become convinced that “the Big One” is never going to happen in their lifetimes.

Unfortunately, the cold, hard science tells us a much different story. According to the top experts in the field, the San Andreas fault is way overdue for a historic earthquake, according to the media.

“Experts have warned that the fault line has been quiet for far too long and is due to erupt at any time.

Thomas Jordan, director of the Southern California Earthquake Centre, told in a conference in Long Beach: ‘The springs on the San Andreas system have been wound very, very tight. And the southern San Andreas fault, in particular, looks like it’s locked, loaded and ready to go’.

Seismologists have said that over the past 1,400 to 1,500 monster earthquakes have ruptured at 150-year intervals.”

And of course the San Andreas fault is only a small section of a seismic zone known as the Ring of Fire that roughly encircles the entire Pacific Ocean.

The U.S. Geological Survey provides tools that show the latest earthquakes in the world. Here is an image of all of the earthquakes along the Ring of Fire of magnitude 2.5 or greater that have happened between November 9 and December 9, 2016. 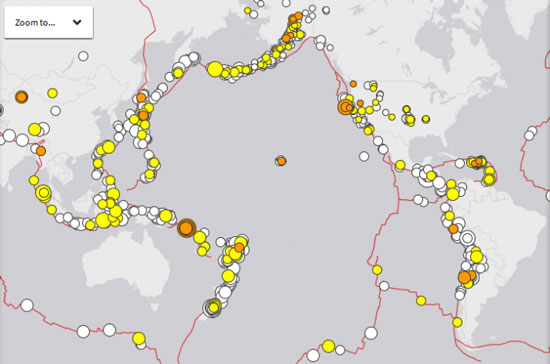 The crust of our planet is becoming increasingly unstable, but meanwhile most people have been lulled into a false sense of security.

At some point a great California earthquake is coming, and when it strikes it is going to change the lives of tens of millions of people in a single moment.