Why Trump is wrong about North Korea

North Korea is a beautiful country, inhabited by human beings, with blood circulating through their veins. Despite what you are directly and indirectly told, these people feel pain and they are capable of experiencing great joy. Like others, they often dream, fall in love, and suffer when being insulted or betrayed or abandoned. They laugh and cry, they hold hands, get angry, even desperate. They have great hopes for a better life and they work very hard trying to build their future.

So listen well, manager, or supervisor of what you yourself call the “free world”. Or how should we call you, President? Ok, fine, President… If you shoot your Tomahawk missiles at them, at DPRK (Democratic People’s Republic of Korea), as you recently did at Syria, or if you drop your bloody “Mother of All Bombs” on them (as you just did on some forsaken hamlet in Afghanistan, just in order to demonstrate your spite and destructive force), their bodies will be torn to pieces, people will die in tremendous agony; wives will be howling in despair burying their husbands, grandparents will be forced to cover the dead bodies of their tiny grandchildren with white sheets, entire neighborhoods and villages will cease to exist. 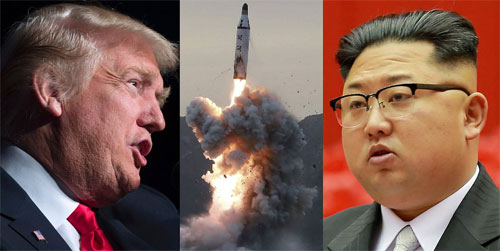 Of course you people do it everywhere; you think that you are the masters of the world, so used to spreading agony and desolation all over the world, but remember and put it on the record: it may all look like some fun-to-play computer game or a TV show, but it is not; it is all real, when your arms hit the targets, it’s horribly real!

North Koreans are supposed to look and behave like a nation of brainless robots, lacking all basic emotions and individuality, staring forward without seeing much, unable to feel pain, compassion or love.

You don’t want to see the truth, the reality, and you want others to be blind as well.

Even if you’ll blow the entire DPRK to pieces, you’ll actually not see much anyway, you’ll see almost nothing: just your own missiles shooting from battleships and submarines, your own airplanes taking-off from aircraft carriers, as well as some computer-generated images of powerful explosions. No pain, no reality, and no agony: nothing will get to you; nothing will reach you and your citizens.

It is you who is blind; it is not they.

You actually like it, don’t you? Admit you do. Let’s have it all in the open. And many citizens in the West like it as well – new titillating experiences, free “entertainment”, and a welcome break from the dire and empty, grey, loveless and meaningless routine of daily life in both North America and Europe. Hundreds of millions glued to their TV screens.

Your popularity is going down, lately, isn’t it? The more missiles you shoot, the more bombs you drop, and the more countries you intimidate and confront, the broader your “support base” gets.

You are a businessman, after all. The trade, the deal is simple, easy to grasp: you give to the majority of your people what they desire, and they give you support and admiration. True, isn’t it, if stripped of all that “political correctness”.

The psychologist Jung called this culture “pathological”. It has already destroyed basically all continents on Earth. It is now, perhaps, attempting to finish what is left of the world.

Still, you ought to know and understand and should be fully aware of the following: you might now get some generous endorsement from your fellow mentally ill citizens, but if you blow up the DPRK or any other country on Earth, sky-high, and if we as the planet Earth still somehow manage to survive, you and your “culture” will be cursed for centuries and millennia to come! Think about it. Is it really worth it?

Perhaps you don’t give a damn. Most likely you don’t. Still, give it a try, try to think, and try to imagine: you will go down in history as a degenerate mass murderer and a bigot!

Three years ago, this is how the 60th anniversary of the Victory Day in the DPRK was described by an alternative media journalist:

“The brass band begins to play yet another military tune. I zoom on an old lady, her chest decorated with medals. As I get ready to press the shutter, two large tears begin rolling down her cheeks. And suddenly I realize that I cannot photograph her. I really cannot. Her face is all wrinkled, and yet it is both youthful and endlessly tender. Here is my face, I think, the face I was looking for all those days. And yet I cannot even press the shutter of my Leica.

Then something squeezes my throat and I have to search in my equipment bag for some tissue, as my glasses get foggy, and for a short time I cannot see anything at all. I sob loudly, just once. Nobody can hear, because of the loud playing of the band.

Later I get closer to her, and I bow, and she reciprocates. We make our separate peace in the middle of the boiling-hot main square. I am suddenly happy to be here. We have both lost something. She lost more. I was certain she lost at least half of her loved-ones in the carnage of those bygone years. I lost something too, and now I also lost all respect and belonging to the culture that is still ruling the world; the culture that was once mine, but a culture that is still robbing people of their faces, and then burns their bodies with napalm and flames.

It is the 60th Anniversary of Victory Day in the DPRK. An anniversary marked by tears, grey hair, tremendous fireworks, parades, and by the ‘memories of fire’.

That evening, after returning to the capital, I finally made it to the river. It was covered by a gentle but impenetrable fog. There were two lovers sitting by the shore, motionless, in silent embrace. The woman’s hair was gently falling on her lover’s shoulder. He was holding her hand, reverently. I was going to lift my big professional camera, but then I stopped, abruptly, all of a sudden too afraid that what my eyes were seeing or my brain imagining, would not be reflected in the viewfinder.”

The West has already killed millions of North Koreans. How many more have to vanish, just for not surrendering? What is the price of not agreeing to serve the Empire? Would it be one million more, or ten million? The number, please: you are a businessman; so do define the price truthfully! 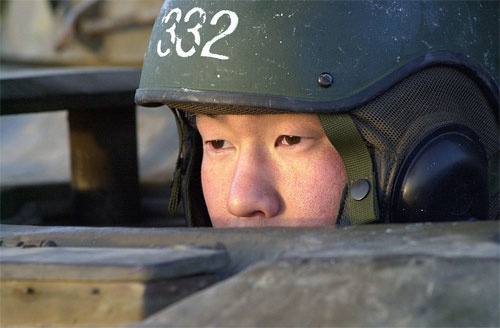 The DPRK has never attacked anybody. The United States which claims it now “feels threatened”, has attacked dozens and dozens of countries, robbed millions of people of life, and raped freedom, democracy and cultures all over the world.

There is another quote from an alternative media essay on the subject:

“At one point I managed to break free from our delegation. It was in the capital, Pyongyang. I just walked and walked, along the mighty river, through an enormous park alongside ancient fortifications.

I spotted a girl, tiny, with a big ribbon in her hair. She was wearing white shoes. It was sunset. Her mother, a simple but beautiful lady, was talking to her. It was so obvious how much she loved and cherished her daughter. The two of them could not see me; I was observing them from some distance. There was so much tenderness, so much serenity between these two human beings. The mother was caressing her daughter’s face, explaining something, pointing at the trees. Their faces were totally relaxed, no fear, no tension, just love.

I walked further, and still in the park, I saw a couple surrounded by a group of people. It was a family photo session. A man and a woman were obviously getting married; he was wearing a formal suit, she was dressed in a wedding gown. Then I noticed that large black sunglasses were hiding a large part of the man’s face. He was blind. Most likely, he was badly burned behind the dark spectacles. His future wife was younger, and she was attractive. She was happy! She kept chatting, laughing cheerfully. I was stunned. In the West, people have been betraying each other, abandoning one another over the tiniest inconveniences or doubts, for the most egotistic reasons. And here, a young attractive woman was joining, happily, her badly injured man, so they could walk together, side-by-side, for the rest of their life journey.

I saw a lot of North Korea after those few hours in the park. I was faced with the most fortified border on Earth. I met and discussed philosophy and how the West tries to de-humanize its enemies, with Yang Hyong Sob, the Vice President of the Standing Committee of the Supreme People’s Committee. I discussed philosophy and existentialism with the great theologian and philosopher John Cobb, on board a bus that was taking us from Pyongyang to the borderline.

There were ‘big moments’ during that trip, great celebrations all around me. There were elaborate performances and speeches, marches and music. Yet, nothing touched me so deeply, as those moments in the park. There, I observed enormous tenderness given to a child by her mother. And I witnessed that natural and beautiful, simplicity and joy of love, mixed with serenity and dignity radiating from a young woman marrying her blind and injured partner.

That is North Korea, which I have been privileged enough to have observed with my own eyes. That is North Korea which the manager wants to ‘take care of’, which means ‘to destroy’. And that is North Korea where I realized, as on so many other occasions, in so many countries, that there is still so much love that resides on this Earth, and that no barbarity, no cruelty, would ever be able to defeat it.

This essay is not my ‘usual stuff’. It shows what is inside me right now, something that is breaking and shouting and rebelling against the state of things.

What I am certain of is that at this moment, I want to be there, in Pyongyang. I want to go back, although no one has invited me to return, yet.

If the supervisor, the manager, decides to attack, I want to be on my feet and alert and ready, facing his ships and missiles. Just like that, as always, without any cover or bulletproof vest, just with my cameras, and a pen and a simple notepad, as well as a tiny Asian dragon – a good luck charm – in my pocket.

I will not be afraid. I don’t think most of the people of North Korea would be afraid. Only those who are ready to commit mass murder, over and over again, in all corners of the world, are now most likely scared; at least subconsciously, at least in their own essence as well as of their own insanity.”