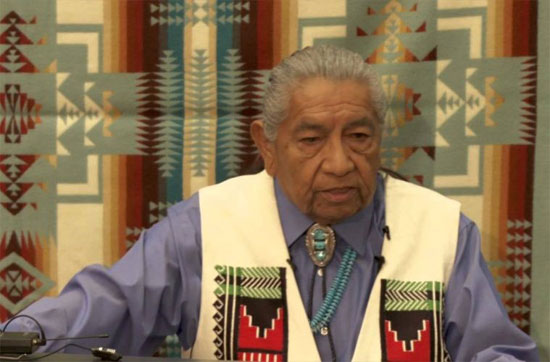 Below is a statement from Chief Looking Horse, delivered in his native Lakota language, at the United Nations Tillman Chapel. It is the embodiment of a confluence of prophecies that speak to the necessity of activating a new level of consciousness for the benefit of humanity and the Earth. Although their statement illuminates the nuclear crisis at Fukushima, the fundamental message is for humanity to spiritually awaken to protect and restore the sacred.

“We are a part of Creation; thus, if we break the Laws of Creation, we destroy ourselves. We, the Original Caretakers of Mother Earth, have no choice but to follow and uphold the Original Instructions, which sustains the continuity of Life. We recognize our umbilical connection to Mother Earth and understand that she is the source of life, not a resource to be exploited. We speak on behalf of all Creation today, to communicate an urgent message that man has gone too far, placing us in the state of survival.

We warned that one day you would not be able to control what you have created. That day is here. Not heeding warnings from both Nature and the People of the Earth keeps us on the path of self destruction. This self destructive path has led to the Fukushima nuclear crisis, Gulf oil spill, tar sands devastation, pipeline failures, impacts of carbon dioxide emissions and the destruction of ground water through hydraulic fracking, just to name a few. In addition, these activities and development continue to cause the deterioration and destruction of sacred places and sacred waters that are vital for Life.”

What does this have to do with Native North Americans and supposed extraterrestrials? Many are coming forward to share their stories that have been passed down generations, and one of them is Zuni Elder Clifford Mahooty, a retired civil/environmental engineer.
He has worked on many programs within environmental justice for Indian tribes, and tribal housing projects in the U.S. Public Health Service as a commissioned officer in water, waste water, and Environmental Protection Agency enforcement in environmental compliance. Mahooty is active in the Zuni orders of the Kachina, Galaxy Medicine Society, and Sun Clan leadership, and is a wisdom keeper of Zuni history.

According to Mahooty, our relationship to the “star people” is spiritual, and directly connected with the caretaking of our planet:

In the future, there will be things that will be happening that will be directly related with the “sky people”. He is referring to the destruction of our planet, which is interesting because contact experiences all seem to share a common message: it’s time to take care of our planet.

One of the most astonishing UFO witness cases, for example, comes from a supposed encounter with over sixty schoolchildren in the town of Ruwa, Zimbabwe, on September 16th, 1994. The children claim to have seen multiple hovering objects that resembled what we would describe as spaceships, and an extraterrestrial being walk out of it. Many of them received the same message about the need to look after our planet.

“They describe these events like a person talks about something that has happened to them. I can tell that these are people of sound mind telling me something.” – Dr. John Mack, Professor of Psychiatry, Harvard Medical School

You can read more about that story here, and you can view more footage of some of the children speaking about the event, decades after it happened, here.

Mahooty also discusses this concern for the well-being of our planet:
“What we generally call the star people… are, in our system of religion and spirituality, the ones that we might call guardians, and also the keepers of the universe and especially of the Earth. And these are the people that gave us the protocols and the ways to maintain this planet and also the people, far back, a long time ago, and so that, the teachings that have passed on from generation after generation.”

“They’ve always been here, the people that are the keepers and the watchers.”

Stephane Wuttunee, who is a Plains Cree and French Canadian author and storyteller, wrote a piece for UFO Digest in 2008, explaining that his perception and understanding “of the ET phenomena as a Native person and its global implications” comes from “having been partially raised within the culture itself.”

In his article, he makes clear that, in his culture, they “give far greater attention to the seeking of the spiritual understanding of things rather than going after ‘the truth’ as people from dominant cultures tend to do. This is part of the reason why we tend to stand back and view or listen at first rather than barge in with questions or take the hard, direct approach.”

It’s important to mention that spiritual understanding and implications are connected to this topic, especially with all of the fear propaganda that is continuously pumped out into the mainstream. Yes, it’s going to ruffle a lot of feathers and interfere with the belief systems of many, but sometimes it’s good to put those aside to at least entertain another idea.

Wuttunee also addresses the “star people” in his article:

“Growing up, I cannot recall having ever heard anyone in my community speak of ‘aliens’ or ‘Extraterrestrials’, though I did hear of distant relations and ‘star people’ living amongst the stars many times, mainly around campfires and during traditional ceremonies. Far from being anything to be feared, star people was just another term I grew up around. I remember listening in awe and fascination at the thought of us having relations that lived off and outside our world, and sometimes spoke to them in my silent moments at night.

I wanted to know who they were and what they looked like, if they had families like us, etc. In all honesty, the only time I was exposed to ‘aliens’ per se was when I would go to the outhouse and read the Weekly World News or the National Enquirer. It wasn’t until my later teens that I discovered that people from the dominant cultures were talking about the same ‘people’ as my elders did, though each side’s sense of perception of these people seemed radically different from one another.”

He goes on two write about how his elders never really made any clear distinctions between extraterrestrials and the spirit world: “In fact, at times I heard Aboriginal elders blend the two together and treat them as one, which I have to admit did kind of take me for a spin when I was young. Were our distant relations physical like us? Did they also exist amongst us in spirit? I had many unanswered questions, so I guess from a fairly young age I had some unraveling to do.”

This illustrates how deeply spiritual discussion of alien life can be. This is one step the human race is going to take, and it seems we are currently going through the process of integration. We ourselves have to grow and evolve, in a spiritual sense, and start to understand our connection to the planet and all life.