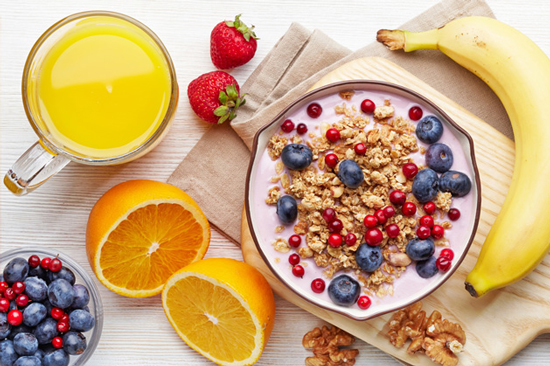 When you see the words “fat burning foods” are you a bit skeptical? It’s pretty hard to believe that putting more calories, fats, and carbs into your body could actually lead to weight loss. But there are some healthy foods that have a very high thermogenic effect and can burn calories as you digest them. There are also foods that boost the metabolism and trigger hormones that fight fat. So grab your fork and dig into these 31 fat burning foods that help you ditch those pesky pounds!

Is it a fruit? Is it a vegetable? Who cares? All you need to know is that it’s got a ton of good things for your body to help you burn fat and lose weight! A team of Japanese researchers discovered a powerful fat-blasting compound in tomatoes called 9-oxo-ODA. Other studies have found the beta-carotene and lycopene in tomatoes benefit fat loss. Researchers found people who eat beta-carotene and lycopene-rich diets have smaller waists and lower belly fat.
Additionally, tomatoes are low-calorie, low-fat, and rich in fiber! Like any bona fide superfood, tomatoes bring more to the table than just weight loss. They contain antioxidants that ward off various diseases and illnesses. So next time you go food shopping, be sure to add tomatoes to your cart.

Grapefruit doesn’t tend to make it onto many people’s shopping lists, but it should. In regards to weight loss, the long-standing myth that grapefruit promotes weight loss is turning out to be true. In one study published in the journal Metabolism, researchers found participants who ate grapefruit for six weeks lost a full inch off their waistlines. In a separate study with 91 obese individuals, researchers found participants who ate half a fresh grapefruit before meals lost 3.5 pounds over a 12 week period. There are numerous other studies that have reached these same findings.

Along with activating fat burning hormones, grapefruits have been shown to keep people feeling full and suppressing appetite. If you don’t have time to eat a whole grapefruit, you can always make fresh grapefruit juice and take it on-the-go!

There’s no need to eat bland and boring food when you’re trying to lose weight. This is a great time to experiment with seasonings from different cultures. Many of them have thermogenic properties that boost metabolism while simultaneously making some so-so dishes taste like they’re from a restaurant.
Some examples: Mustard seed will spice up your entree as well as rev your metabolism, ginger can help with your digestion, ginseng can boost your energy, and black pepper can help burn calories. Then there’s the yellow magic spice turmeric. If you like Indian food then chances are you will like turmeric. Along with a delicious flavor, turmeric can help break up fat.

If you like your food hot, then this is great news for you! Hot peppers like habaneros, jalapenos, and chipotles can actually help you to lose weight while also adding a kick to food. That’s because they contain capsaicin, which provides several benefits that relate to losing weight. One of the main benefits of capsaicin is its ability to convert food into energy, which speeds up abdominal fat loss.
If you’re worried that eating such hot peppers can somehow burn a hole in your stomach, recent research shows they may actually help to prevent stomach problems, like ulcers, by killing the bad bacteria responsible. So fire away!

Don’t underestimate the power of cinnamon… it’s not just for baking anymore. You can get weight loss benefits simply by adding more cinnamon to your diet. Just consuming a teaspoon a day is showing positive results. What causes the magic? It’s the way that cinnamon helps to regulate your blood glucose levels. These levels play a major part in how you feel throughout the day – how energetic you are or how sluggish you feel. Maintaining good blood sugar levels can also help you crush cravings. Just make sure that you’re not counting that cinnamon on your cinnamon roll!

Acidic foods can increase the rate at which your body burns up carbs. They can also give your metabolism a good boost, which can lead to weight loss. Apple cider vinegar is no exception. The enzymes found in apple cider vinegar help digest food and regulate blood sugar levels. As mentioned above, this can help crush food cravings.

Aside from adding apple cider vinegar to a salad, you can also simply add a spoonful to a glass of water and drink the mixture about 30 minutes before eating. When it comes to what brand of apple cider vinegar you use, though, don’t judge a book by its cover. Rather than using a crystal clear vinegar, you’ll want to use one that looks murky and has a cobweb-like substance floating in it. This is actually desired. It’s called the “mother”, which means it still contains beneficial compounds (including beneficial probiotics). 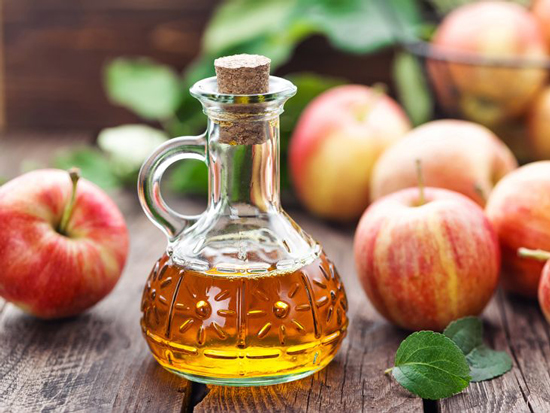 Apples are often viewed as the ultimate health food and rightfully so. They offer the body many health benefits, including weight loss. That’s partly because apples are high in pectin, which binds with water and limits the amount of fat your cells can absorb. Additionally, apples are high in fiber, which makes you feel full for longer. Just be sure to chew your apple really well before swallowing and go organic so you can leave the peel on! Did you know the peel is loaded with beneficial nutrients?

Pears often get overlooked as the long lost cousin to apples, but they too offer a host of benefits, including weight loss. Just like with apples, pears contain pectin and are rich in fiber, which helps beat mid-morning or afternoon snacking. If you don’t keep pears in your house, then it’s time to start. You can eat them plain as a snack or you can cook with them!

Cantaloupe is a great weight-loss food since its high in filling fiber and the fat-fighting compound beta-carotene. It’s also sweet, yet low-calorie, making it the perfect treat. When it comes to eating cantaloupe, though, doctors say it’s best to eat it alone. In an interview about proper food pairing, Dr. Joseph Mercola said: “Eat melon alone, or leave it alone, or your stomach will moan. In short, melon does not digest well with other foods and will frequently cause problems unless you eat it alone.”

Bananas contain soluble fiber that helps slow digestion and keeps you feeling full for longer. So if you eat a banana with your breakfast, you should be able to make it to lunch without a rumbling tummy. If you do find yourself craving a mid-afternoon snack, though, why not peel open another banana? One medium size banana only has around 110 calories, making it a great snack idea.

Bananas are perfect for just about every occasion since they’re a versatile food. Since they come in their own protective wrapping, they are a great grab-and-go snack. If you do have time to sit and enjoy a banana, why not cut one up and add it to some oatmeal? They are the perfect addition to smoothies, can be dried into banana chips, and taste delicious with a little dark chocolate drizzled on top!

Berries, in general, are great for weight loss and fat loss. That’s because they are loaded with polyphenol antioxidants that can help burn fat as well as prevent it from forming. Various studies conducted on both rats and humans have looked closely at the role berries play in weight loss. Researchers have found promising fat-loss results. We singled out blueberries, however, because they are a great source of the antioxidant resveratrol, which researchers say can turn harmful white fat into calorie-burning brown fat.

When you chomp into an orange, chances are you think of their amazing dose of immune-boosting vitamin C. But did you know they also aid weight loss? While this fruit does contain a nice amount of sugar, the fiber in oranges actually helps to regulate your blood glucose levels. Additionally, oranges are low-calorie.

This is one food that almost every single diet plan in existence suggests you eat. Nuts are one food that unites the vegetarians and the Paleo followers. We have yet to find a diet program that says not to eat them. They’re straight from the Earth and a small handful of raw organic almonds, walnuts, or pecans can be a crunchy snack that leaves you feeling good for a few hours or more. Additionally, they contain beneficial nutrients that promote weight loss!
If you don’t like eating nuts for a snack, try chopping them up and sprinkling them on main dishes or side items. You’ll still get the good fats they bring and they help flavor up the meal.

Although carbohydrates have gotten a bad reputation, oats play a significant role in weight loss. That’s because they contain a good amount of fiber, slow digestion, help you feel fuller longer, and boost metabolism. In one study conducted by Tufts University, researchers found people who ate three or more daily servings of whole grains (such as oats) had 10 percent less belly fat than people who ate the same amount of calories from processed white carbs.
Everyone from The Biggest Loser trainer Bob Harper to the American Heart Association says eating a bowl of oatmeal for breakfast is a good way to start your day! Along with aiding weight loss, oatmeal benefits heart health by lowering high blood pressure and LDL “bad” cholesterol levels.

The many benefits of quinoa have been known for some time by vegetarians. Today, it’s a popular gluten-free food across several different diets. That’s because quinoa is a complete protein, meaning it contains the complete chain of amino acids that are necessary for muscle building and fat loss. Additionally, quinoa can help keep you feeling full for longer, ranks low on the Glycemic Index, and contains plenty of other key nutrients that benefit the body.
If you haven’t tried it yet, what are you waiting for? Check out this video to find out how you can incorporate quinoa into your regular diet.

Sweet potatoes aren’t only a delicious Thanksgiving food. They’re great for dieters because they have fewer calories than regular potatoes and also help you stay satisfied between meals. They’re often called a “slow carb” because they’re digested slowly. Additionally, they’re loaded with powerful nutrients that stabilize blood sugar, lower insulin resistance, and prevent calories from converting to fat. If you’re addicted to spuds this could be the perfect food for you!