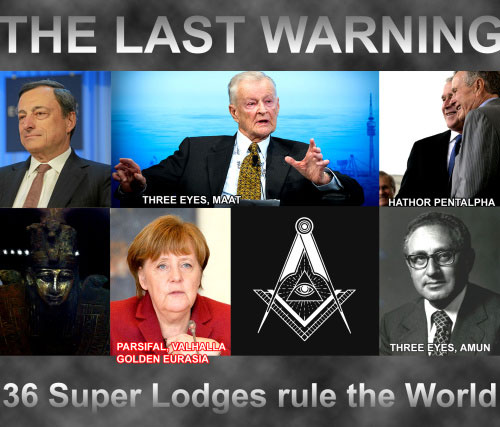 Here is an example of a High Grade Freemason Super Lodge Member:
One of the most prominent and influential Super Lodge member was Peter Dennis Sutherland. Until his death he was Special Adviser to the UN Secretary-General on international migration (refugees, for example from Syria). He was a member of the following anti-democratic Super Lodges: Edmund Burke, Compass Star-Rose / Stella Ventorum, Pan Europa, Three Eyes, Tao Lodge. He was also European Competition Commissioner, Director-General of the United Nations Organization GATT, Director of Rothschild Bank Goldman Sachs, head of the Rothschild Group British Petroleum. At the same time, he was a lawyer, politician, manager, businessman. Only possible by the Super Lodges.

Here are more examples:
Angela Merkel is a member of Satanic Super Lodge Parsifal. This Super Lodge is anti-democratic. It had the swastika as a symbol. 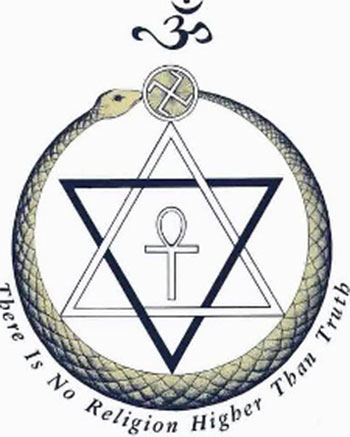 Shortly after it was clear that Hollande becomes French president agents of Parsifal and Valhalla and other Super Lodges brought him death threats and offered much money, to bring him on course. For some time the atmosphere between him and Merkel was frozen. Then they acted as “friends” on political stage.
Merkel is also member of Golden Eurasia (democratic), Valhalla (anti-democratic). Wolfgang Schäuble (current president of the Bundestag) is member of Der Ring (anti-democratic) and Joseph De Maistre (anti-democratic). These lodges have nothing to do with God. Quite the opposite. Der Ring sits in Frankfurt, the real main HQ of the European Union (not Brussels).

The most prominent German members of some Super Lodges

Here is an American example:
Bill Clinton is a member of the following Super Lodges: Compass Star-Rose (anti-democratic), Three Eyes (anti-democratic), Janus (neutral), Maat (neutral, also Obama is a member). It is not known if Trump or Hillary are also members of any Super Lodge. But they were sent into race to combat Jeb Bush of Hathor Pentalpha (anti-democratic). Jeb Bush helped George Bush (Hathor Pentalpha) to become president a second time by manipulation of votes in Florida. Jeb left the race in 2016. Trump combated Hillary. Of course it is a designed play by the Super Lodges. Behind the stage Trump is an ally of Hillary. Both act according to orders. If Trump acts not 100% he will get killed just like John Fitzgerald Kennedy. Hillary probably knows that. In fact the other part of the dialectic fraction (democratic) wants to fight Hathor Pentalpha (founded 1996 by George Bush senior, with members like Al Baghdadi and Erdogan).They design whole full scale wars with trillions of dollars and millions of casualties, do not forget this. They are capable of everything, but they cannot change the good in the human mind. 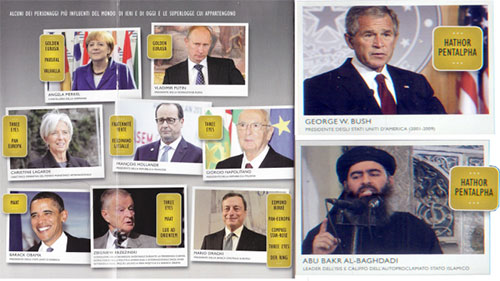 Karl Rove of the Super Lodge Hathor Pentalpha said “We’re an empire now, and when we act, we create our own reality. And while you’re studying that reality – judiciously, as you will – we’ll act again, creating other new realities, which you can study too, and that’s how things will sort out. We’re history’s actors… and you, all of you, will be left to just study what we do”, as cited in the book MASSONI by Gioele Magaldi.

Isis is a goddess. All leaders of the world worship her, no matter if they come from the U.S., E.U., Arabia, Oman, Turkey or Russia, Asia. They are obsessed with her, to serve her. Hathor is another name for Isis. The most brutal Super Lodge (besides Geburah) is Hathor Pentalpha (it was founded by Bush in 1996, and it created 9/11). As mentioned above, it also created the terror group ISIS (while Al Baghdadi is a member of it along with the CEO of Siemens, for example).
Another Super Lodge is Maat – a neutral one. Obama is a member of it, and Bill Clinton as well. Maat is another Egyptian goddess. The Isis Cult survived the end of the Egyptian and Roman Empire.

Zbigniew Brzezsinki (Frater Kronos) of the Ur Lodge Three Eyes speaks about the true background of the destruction of the World Trade Center as “The Founding Event of the 21st Century”.
Given the fact that there are 18 intelligence agencies in U.S.A., it is inconceivable that none of them should have known anything about the complex and far-reaching plans to destroy the Twin Towers. What lay behind this “terrorist act” which, technically speaking, had more the character of a controlled demolition than a guided plane crash? Frater Kronos undertakes to tell us something of the hidden background to 9/11, in the book MASSONI.

We are taken back to the U.S. Presidential elections of 1992, where the 14 Masons responsible as a group for such decisions chose W. J. Clinton (Bill), whereby Bush Senior was intended to withdraw from the campaign. But he did stand for reelection and, together with his cronies of Three Eyes, Cheney, Rumsfeld etc., Bush was infuriated at being made to step aside in favor of Clinton. This situation worsened in 1996 when Clinton was admitted to Three Eyes, Bush Sr.’s own Lodge. (Frater Kronos confesses to having, himself, played a part in these manipulations.)

In 1993, the first year of Clinton’s presidency, Dick Cheney and Don Rumsfeld commissioned Samuel Huntington to write The Clash of Civilizations, which then appeared and was disseminated widely in the critical year 1996 when Bush Sr. Was seething with anger at the thwarting of his ambitions.
Huntington’s book was the ideological manifesto of Freemasonry for the 21st Century. It was the focus for the informal founding of the new Ur-Lodge Hathor Pentalpha under the auspices of Bush Sr., Jeb Bush, S. Huntington, D. And R. Kagan, D. Feith, Dick Cheney, D. Rumsfeld, I. And W. Kristol, Dan Quayle, P. Wolfowitz, R. Perle, Karl Rove etc. The next step was the forming of the para-Masonic think-tank Project for the New American Century in early 1997. The Statement of Principles of the PNAC (Project for the New American Century) has ostensibly to do with the expansion of American Interests. Frater Kronos reminds us however, that the interests served have nothing to do with the American people.

He then describes how he helped to bring about the financial collapse in Asia in 1997-98. A next important initiative of his, with Larry Summers etc., was the repeal of the Glass-Steagall Act of 1933, so that banking activity was now completely free of legal restraint. Frater Kronos made full use of the new powers of financial manipulation in S.E. Asia, Japan and finally Washington itself. But by 2000 it became evident that a huge new threat was emerging.

In 1997 Tony Blair had become P.M. in Britain and was inducted into the informal nucleus of the projected Hathor Pentalpha Lodge which, after a 4-year secret existence, became official in summer 2000. Its Grand Master was Dick Cheney, First Overseer Don Rumsfeld, Second Overseer Bill Kristol, Orator Samuel Huntington, Treasurer Paul Wolfowitz, Secretary Richard Perle, Deputy First Overseer Tony Blair, Deputy Orator Karl Rove, plus many others in the centers in Europe and the Middle East. The first really alarming act of the Hathor Pentalpha was the publication in Sept. 2000 of Rebuilding America’s Defenses: Strategies, Forces and Resources for a New Century.

One year after 9/11 Scottish journalist Neil Mackay wrote a perceptive article on U.S. ambitions, which FCI now reads out. Also an Italian article quoting from Rebuilding America’s Defenses which states that the rebuilding process would be very slow “unless a catastrophic and catalytic event occurs, like a new Pearl Harbor”.
Frater Kronos continues by informing us that Osama bin Laden was originally a Three Eyes member and that Al Qaeda was infiltrated and steered by members of Edmund Burke, Three Eyes and White Eagle. There was great concern in these Lodges over what Hathor Pentalpha might do if its candidate were elected to the Presidency – George W. Bush. He was the mediocre man best suited to disguise, and to further the aims of Hathor Pentalpha. Frater Kronos and allies supported the candidacy of Al Gore. But Jeb Bush as governor of Florida was able to influence the counting of votes so that his brother George W. won the election.

After 9/11 Hathor Pentalpha had found its Pearl Harbor, thus inaugurating several years of aggression and brutality. Frater Amun brings a list of 6 Saudi princes, the Sultan of Oman, the Emir of Bahrain, the Emir of Qatar, 6 leading Iranians, 4 leading Israelis who joined Hathor Pentalpha in 2000. This was a period where huge profits were made by a small circle of Masons gravitating around Hathor Pentalpha, Geburah, Amun, Der Ring and others.

Here’s an excerpt from MASSONI. FCI is the interviewer in the book.
“FCI: You mean the oil trade, drug trafficking in Afghanistan, and reconstruction of infrastructures, particularly in Iraq?
Frater Kronos: Certainly!
Frater Jahoel: Not to forget the very important profit accruing to members and sympathizers of Hathor and Jeburah, from the Patriot Act, proclaimed in Oct. 2001 and still in force in 2015, stifling civil liberties for the sake of a “war on terror”, and in flagrant contradiction of the U.S. Constitution.
FCI: Frater Kronos, tell us more about Osama bin Laden and Al Qaeda.
Frater Kronos: Osama bin Laden was first serving Three Eyes in the anti-Soviet conflict and in Islamist international terrorist acts. Then after 2000 he slipped from our control and worked for Hathor and Geburah, as ‘public enemy number one’ – an example of the fictions sold to the world in order to create a new order in which internal security is placed before traditional civil liberties.”