They’ve got him surrounded 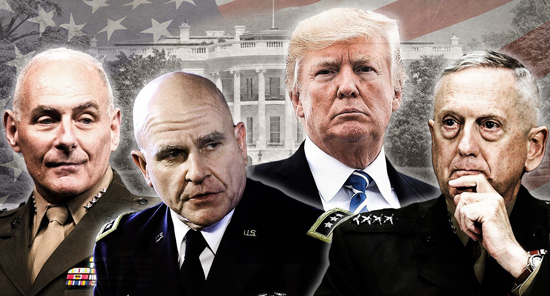 As Vice President Mike Pence made a fool both of himself and the country he was supposed to be representing at the Olympic Games in February, by refusing to stand for the athletes of any nation other than the US, back at home the Washington Post was reporting on a President Trump who appeared to have nothing in common either with Pence or with the White House staff.

The piece, entitled Trump’s favorite general: Can Mattis check an impulsive president and still retain his trust? told a story that pictured a President inclined to challenge the “War Partyˮ against a Praetorian Guard determined to nullify his electoral mandate to keep out of foreign wars and put “America first”:

“Although Trump has given the military broad latitude on the battlefield, he also has raised pointed questions about the wisdom of the wars being fought by the United States. Last year, after a delegation of Iraqi leaders visited him in the Oval Office, Trump jokingly referred to them as ‘the most accomplished group of thieves he’d ever met,’ according to one former U.S. official.”

Truer words were never spoken, but of course this leak was designed to embarrass Trump and put him at odds with those very thieves. Mattis was presumably horrified by this truism, since the General is an even bigger thief, having successfully manipulated Congress into appropriating 15.5 percent more money for the military than Trump asked. The Post piece went on to detail the President’s many heresies:
“He has repeatedly pressed Mattis and McMaster in stark terms to explain why US troops are in Somalia. ‘Can’t we just pull out?’ he has asked, according to US officials.ˮ

“Last summer, Trump was weighing plans to send more soldiers to Afghanistan and was contemplating the military’s request for more-aggressive measures to target Islamic State affiliates in North Africa. In a meeting with his top national security aides, the president grew frustrated. ‘You guys want me to send troops everywhere,’ Trump said, according to officials in the Situation Room meeting. ‘What’s the justification?’”

Oh, the shocked silence in that room must have lasted for what seemed like forever. Then Mattis came up with the same old bullshit:
“‘Sir, we’re doing it to prevent a bomb from going off in Times Square,’ Mattis replied.”

Trump didn’t fall for it. “The response angered Trump, who insisted that Mattis could make the same argument about almost any country on the planet.” And the President wasn’t alone in his skepticism: “Attorney General Jeff Sessions echoed Trump’s concerns, asking whether winning was even possible in a place such as Afghanistan or Somalia.”

Here’s the scary part, which concluded the piece:
It was Mattis who made the argument that would, for the moment at least, sway Trump to embrace the status quo – which has held for the past two presidents.

“‘Unfortunately, sir, you have no choice,’ Mattis told Trump, according to officials. ‘You will be a wartime president’.”

Really? Why is that? And which war is Mattis specifically referring to? Afghanistan? We’re largely out of Iraq. Syria – the latest addition to our interventionist folly? We aren’t told, but it’s not any foreign war Mattis is referring to, but – perhaps unconsciously – he’s referencing the war at home, i.e. the one being conducted by his own government against the President of the United States.

We read about it every day in the media: the Russia-gate hoax is still being flogged, despite growing evidence of its utter falsity. Robert Mueller is still on the prowl, looking for a pretext to take Trump down. The media, a longtime adjunct of the national security bureaucracy, is openly working in tandem with the intelligence services to take out Trump – and if you want to know why, just study the reporting on Trump’s reluctance to go along with the “War Partyˮ’s murderous agenda.

So once they take him down, who will be Trump’s replacement? It’ll be Mike Pence, of course, the same person doing everything in his power to destroy the possibility of peace on the Korean peninsula – quite against Trump’s expressed hope that “we can make a deal” with North Korea.

The “War Partyˮ cannot tolerate a President who questions the most basic premises of the American Empire: “You guys want me to send troops everywhere!” Of course they do. However, Trump was elected to carry out a very different mandate: to start putting America first. He railed against regime change. And now the regime-changers want to carry out a change of regime against him.

Just look at the reporting by James Risen in The Intercept: “the FBI/CIA/NSA cabal paid a Russian operative $100,000 as a down payment on a total of a million to get compromising material on Trump.ˮ

Isn’t this kind of thing only supposed to happen in places like Tadjikistan? Oh, it was all done under the pretext of getting back our stolen cyber-war tools, but really – how valuable are they if the Russians already have them? Sure, we could find out what was stolen – we still don’t know – but the long involved process described by Risen is really about getting rid of Trump. That’s all they really care about right now, and they’ll stop at nothing – including assassination – to pull it off.

There’s too much money riding on the continued existence and expansion of our worldwide empire to let Trump ruin their scam. Too many careers are based on it, too much prestige is at stake, too many “allies” are dependent on the largesse it affords them.

They’re boxing him in, despite his noninterventionist instincts, and they’re compiling “dossiers,” and they’re mobilizing all their forces for the final assault on the Oval Office. In an important sense, Trump is being held hostage: they have limited his policy options in every important sphere of the national security/foreign policy realm.

The “swamp” Trump talks about is an international miasma, and swamp creatures of diverse nationalities are crawling out of the muck, their claws aimed straight for the presidential throat.

The “War Partyˮ plays for keeps. The question is: does Donald Trump? We shall see.

The ‘god’ of Freemasonry Exposed