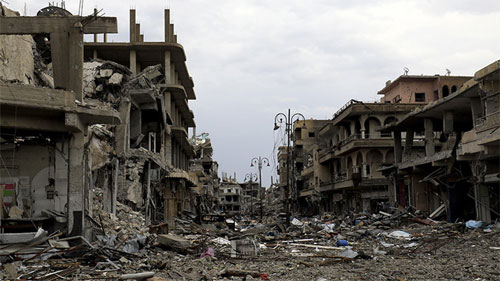 As if we have no memory, corporate media continued to recycle accusations of starvation, chemical weapons, and more, in the propaganda war on Syria.

In Syria, there never was a “revolution.” Instead, it was a premeditated war on Syria by foreign powers (namely the US, Saudi Arabia, Qatar, Turkey, and Israel) who armed even Al-Qaeda (something Qatar recently admitted).

In support of the conflict comes some of the most egregious war propaganda, endorsed by media, Hollywood celebs, and faux human rights groups. The following is a brief outline of some of the most obvious hoax personalities and purveyors of misinformation on Syria.

Irrefutable documentation reveals that the group known as the White Helmets and portrayed as “neutral, volunteer, rescuers,” are obscenely-funded by Western nations, work solely in Al-Qaeda and co-extremist areas, and have been present to clean up at executions. Yet, we are expected to believe they rescue civilians. People from areas liberated of Al-Nusra and cohorts described them as “the Nusra Front’s civil defense.”

Corporate media did not bother to investigate this transparent propaganda construct. Instead, they lobbied for Al-Qaeda’s rescuers to get the Nobel Prize.

While the group didn’t get the Nobel, they did receive an Oscar, and actor George Clooney’s endorsement. Even though he is busy being a celebrity, he surely cannot claim ignorance. One wonders whether he will have the gall to continue his support for Al-Qaeda’s rescuers.

American former comedian Bilal Abdul Kareem was embedded with Al-Qaeda and other “moderates” in eastern Aleppo, promoted their narrative and interviewed Saudi terrorist Abdullah Muhaysini. Yet, corporate media like CNN have presented him as an “independent” source of credible information on Syria.

As Aleppo was being liberated of Al-Qaeda and company, Abdul Kareem claimed civilians did not want to go over to ‘regime areas.’ However, on many occasions before liberation, civilians did try to flee to government areas. In November 2016, I interviewed one family who managed to escape, along with over 40 other people. This particular family had tried twice before and were forcibly prevented by the “moderates” in the district of al-Halek in Aleppo.

When I returned in June 2017, in eastern Aleppo, I spoke with residents who had come back when peace was restored. I also saw hospitals turned into terrorist headquarters, using basements for Sharia court prisons.

Following the expulsion of Al-Qaeda and other “moderates,” over 100,000 people from eastern Aleppo chose to stay in government-secured areas, celebrating the liberation of their city.

The “Assad is starving civilians” theme has been recycled for years, from Damascus to Aleppo to eastern Ghouta. In 2014, a month after the Old City of Homs was secured, I met civilians who told me of terrorists stealing every last morsel of their food. I heard the same in Aleppo, and also this June in Madaya and al-Waer, Homs.

When I visited Madaya, people told me: terrorists hoarded the food aid and dramatically inflated the prices to rates civilians couldn’t afford.

I saw a bomb factory, tucked away behind an apartment building, and remnants of the food aid which Ahrar al-Sham and Al-Qaeda had hoarded, and I visited some of their makeshift prisons used to torture and try civilians in Sharia courts. In al-Waer, life was trickling back. People spoke of starvation due to the terrorists, and of relief that their rule was over.

When “rebels” fire mortars into civilians areas, corporate journalists like to claim the Syrian government was the perpetrator. On a November 2016 day when two mortars hit Aleppo’s Castello road, less than 100 meters from where I stood without a helmet or flak jacket, the NY Times wrote that soldiers blamed “rebels” and “rebel groups denied it.” Yet, there was no disputing that the shells came from an Al-Nusra area.

In April 2014, after an elementary school was mortared by terrorists east of Damascus, killing one child, the BBC later reported, “the government is also accused of launching them into neighborhoods under its control.” On a social media post, I noted this deceitful journalism, and the BBC could have easily learned about the trajectory of mortars and from where the mortar in question could only have come: the “moderates” east of Damascus.

In a hotel in Aleppo in July 2016, I shared an elevator with Channel 4 reporter Krishnan Guru Murthy, without knowing who he was. I would later become very familiar with Channel 4 and Guru Murthy’s relentless anti-Syria propaganda and romanticization of the terrorist factions in Syria, white-washing their crimes, relying on Al-Qaeda and other very partial sources.

Guru Murthy produced a report embedded with the Nour al-Din al-Zinki faction, who he deemed “moderates,” although some months prior they had savagely beheaded Abdullah Issa, a Palestinian boy. Not initially a problem for Channel 4, they did later remove the incriminating video.

Not featured on Channel 4 or other corporate media reports were the nearly 11,000 civilians killed by the bombing and sniping of “rebels.”

I wrote about these attacks, and the over 4,000 Aleppo doctors disappeared by the media, along with hospitals and schools attacked by “moderates.” Corporate media was busy claiming “last doctors” in Aleppo.

When Krishan Guru Murthy, in July 2017, returned to Aleppo and interviewed MP Fares Shehabi, Guru Murthy refused to “get into history” over his lies, much less to acknowledge that the “moderates” he propagated about were Al-Nusra.

In April 2016, the Guardian reported that a Syrian or Russian airstrike “completely destroyed” the Quds hospital in Sukkari, Aleppo. The Guardian later claimed civilians were being treated in the same hospital after a chlorine gas attack, not researching that the sole chlorine gas factory in Syria had been taken over by Al-Nusra in 2012.

The original lie about Al-Quds’ destruction came from Médecins Sans Frontières, which claimed Quds had been “destroyed,” reduced “to rubble.” Since the Guardian was complicit in reproducing the lie, why didn’t the Guardian at least go to see the Quds hospital after Aleppo was secured? I did.

In June 2017, I stood inside the intact hospital. It was never destroyed.
I also met the boy, Omran Daqneesh, who, according to the Guardian, was injured by a Syrian or Russian airstrike in 2016. Mohammad Daqneesh said his son was only mildly injured, and not by an airstrike. He blamed media and those affiliated with the White Helmets for using his son in propaganda.

In June 2017, the American-led coalition illegally attacked Syria, shooting down a Syrian plane. America did so admittedly to protect its proxy forces, the Kurdish SDF, which the US is using not to fight ISIS but in its continued attempts to destabilize Syria and control its oilfields.

In September 2016, the US-led coalition waged a nearly one hour attack on a Syrian military position in Deir ez-Zor, enabling ISIS to take over the post.

In May 2015, convoys of ISIS streamed through hundreds of kilometers of open desert, taking over ancient Palmyra. The well-equipped, high tech, US-led coalition, offered no resistance, something which even Robert Fisk, openly sour about his dislike of the Syrian government, noted.

America has also “accidentally” delivered weapons to ISIS and has long sought to use a “Salafist principality” in eastern Syria, aka Islamic State, as per a declassified US DIA document.

One can always listen to John Kerry speaking in September 2016 about how America watched ISIS flourish. Excerpts include Kerry saying “We were watching. We saw that, that Daesh was growing in strength. And we thought Assad was threatened.”

In July 2017, the Washington Post reported on an Israeli attack on Syria, citing Benjamin Netanyahu as saying they had attacked Syria “dozens” of times. Mint Press News reported on Israel giving medical treatment to over 3,000 terrorists. A 21 Century Wire article said the preference of Israeli politicians was even for an ISIS victory in Syria.

According to the Times of Israel, ISIS has opened fire on Israel and apologized. This is the jihadist group, ISIS, which doesn’t attack the natural target, Israeli regime occupying Palestine, but instead, collaborates with it.

Why Were Vatican And Church Hierarchies not Unnerved About Infertility “Ingredients” In WHO’s African Tetanus Vaccine Campaign?