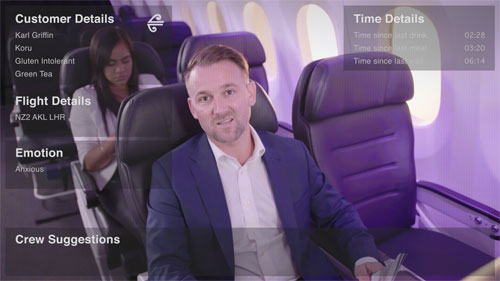 It appears that air travel is going to be the new frontier for high-tech privacy invasion taking place in the name of security, efficiency convenience, and now “customer service.”

There was a time not long ago where rumblings about facial recognition and other forms of biometric identification for use in travel was dismissed as a science fiction that could not be achieved and that most people would not tolerate it if biometric ID ever became a reality. This is science fiction no longer as airports around the United States and the world are beginning to implement biometrics at varying degrees of scale with little to no resistance from the traveling public.

It behooves us, then, to look at another trend that has been taking shape slowly but surely: augmented reality.

Google and Microsoft both have been investing heavily in augmented reality applications. Google, of course, has their Google Glass which has been met by a lukewarm reception at best, but the general idea to merge smartphone applications into a wearable interface is still being pursued with enthusiasm.

Microsoft began its foray into augmented reality in the entertainment arena. Now, however, it serves as an illustration of how this technology can spread into the lives of people who might have zero natural interest in video game or “smart” applications. According to News.com.au they might be subjected to it on future flights, as stated by Jonathan Glenister:
“The Microsoft HoloLens allows you to combine holograms with the physical world around you. We worked with the Air New Zealand cabin crew to trial a Microsoft HoloLens application. The app uses cognitive services and surfaces relevant data about the passenger, their preferences and their journey.ˮ

The “data” about the passenger and their “preferences,” it turns out, is set to be incredibly invasive:
Through advanced facial technology, he is able to recall details about a passenger’s destination, allergies, and even the time since they got their last beverage.
It even assesses the passenger’s mood. You can see his mood change from “anxious” to “calm” as the flight attendant addresses his concerns.

HoloLens was introduced to the public in 2016 as a concept for developers and businesses that carried a steep price tag of $3,000. Essentially, as with all smart technology, it moves from a one-way consumer-directed application, to a two-way data collection system of tracking and surveillance.
It is also worth keeping in mind that air travel is no longer a type of willing contract with a private company; under the umbrella of anti-terrorism, governments will also be very interested in this additional data and are likely to have easy access to it if requested. 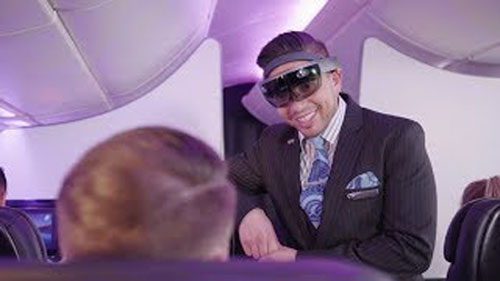 The general concept that is being undertaken is to introduce a world of “Hyper-reality” where our everyday experience becomes overlaid with data points on everything from credit score, to social media presence, to consumer reports and preferences. It’s only in the testing phase at this point but, as we should know by now, the old maxim that “what the mind can conceive, it can achieve” was never truer than in today’s world of exponential growth in computing. To see where all of this could be heading, here is one possible future as augmented reality expands.

With two intelligence agency-connected tech behemoths like Google and Microsoft investing so vigorously in augmented reality, a “smart” future appears to be on the way sooner rather than later.
And as government is now openly embracing a Minority Report-like future of pre-crime high-tech surveillance systems with an emotional component, we should probably ask ourselves if we are willing to accept these tests and how open we are to becoming the subjects.