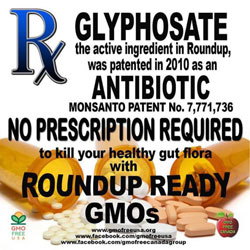 While you’d be hard pressed to find anyone willing to use a known herbicide for medicinal purposes, that hasn’t stopped Monsanto from patenting the star ingredient of their flagship herbicide, Roundup, as a type of antibiotic. In 2003, the corporate giant first submitted a patent for glyphosate as a parasitic control-type antimicrobial agent – or, in other words, a type of antibiotic.

The patent was granted in 2010, and you can view it here. Monsanto patented the combination of glyphosate and polyvalent anion oxalic acid as a method for preventing and treating pathogenic infections like malaria. As the patent explains, parasites from the phylum of Apicomplexa are often responsible for diseases in humans and other animals – and glyphosate is capable of inhibiting the growth of these parasites.

This patent certainly brings even more concerns about the Bayer-Monsanto merger, but more importantly, it raises a significant question: is glyphosate contributing to the proliferation of antibiotic-resistant bacteria?

Recent research has revealed that the herbicide could indeed be a contributing factor to the “superbug” epidemic that is being seen around the world. Scientists from the University of Canterbury in New Zealand have piloted new research that shows glyphosate is not just an herbicide, but a potential vector for antibiotic-resistant disease.

The study is the first of its kind. Professor Jack Heinemann, from the university, says that while herbicides may be tested for their ability to kill bacteria, they are not tested for what other effects they may have on microbes.

“We found that exposure to some very common herbicides can cause bacteria to change their response to antibiotics. They often become antibiotic resistant, but we also saw increased susceptibility or no effect. In most cases, we saw increased resistance even to important clinical antibiotics,” Heinemann commented.

The professor went on to explain that their results were so surprising that they enlisted another researcher from a different institution to conduct the same exact experiments in a different environment and without knowing exactly what she was adding to the bacteria, to help ensure the validity of their findings. The research conducted at Massey University yielded the same results as that done by the University of Canterbury.

According to the researchers, the effects they uncovered would be relevant to people and animals who are exposed to pesticides used in similar concentrations to that of what was tested. While the amounts used by the team were of greater concentration than what is currently supposed to be allowed in food – as we all know, the amount of glyphosate residue in and on food often surpasses what is deemed “permissible”.

As antibiotic resistance continues to grow, the threat that glyphosate poses simply cannot be ignored. The effects of herbicides like glyphosate can have on bacteria are very real – especially given the chemical’s tendency to be intentionally misused by farmers as a desiccant. 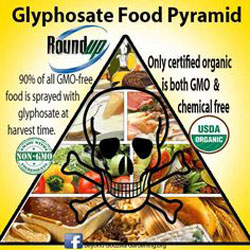 Does glyphosate alter healthy bacteria in the gut, too?
Pathogenic bacteria are not the only microbes susceptible to the ill effects of glyphosate. The bacteria that reside in the human gut can also be harmed by the toxic herbicide. The very same shikamate pathway that glyphosate uses to target weeds and pathogenic bacteria species is the same pathway it would use to destroy the friendly and beneficial bacteria that inhabit the intestinal microbiome. This, of course, would come with its own host of adverse health effects.

There is no reason to believe that if glyphosate is capable of killing or altering one type of bacteria, that it would not harm other bacteria via the same pathway. Some research has already alluded to the potential for glyphosate to wreak havoc on the human digestive system. Given that the microbiome is of great importance to overall human health, findings such as this are not surprising: if glyphosate is killing off intestinal bacteria, it stands to reason that may be the first point of disease. Furthermore, some research has shown that glyphosate is capable of altering gut bacteria in other animals – for example, in 2014 German scientists found that glyphosate negatively affected the gut bacteria of cows.
It seems that the more we learn about glyphosate, the more dangerous it becomes.