All Wars Are Bankers Wars! (3) 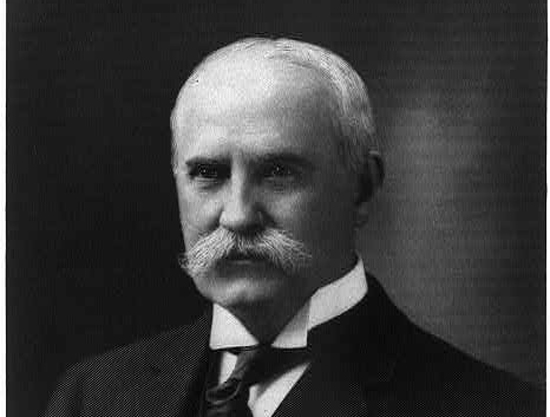 In 1910, Senator Nelson Aldrich, Frank Vanderlip of National City (Citibank), Henry Davison of Morgan Bank, and Paul Warburg of the Kuhn, Loeb Investment House met secretly on Jekyll Island, Georgia, to formulate a plan for a US central bank, and created the Aldrich Plan, which called for a system of fifteen regional central banks, openly and directly controlled by Wall Street commercial banks.

These banks would have the legal ability to create money out of thin air and represented an attempt to create a new Bank of the United States. Public reaction was swift.

Due to the intense public opposition to the Aldrich Plan, the measure was defeated in the House of Representatives in 1912. One year later the bankers would be back!

The Third Bank of the United States, aka The Federal Reserve

Following the defeat of the Aldrich Plan, in 1913, the Private Central Bankers of Europe, in particular the Rothschilds of Great Britain and the Warburgs of Germany, met with their American financial collaborators once again on Jekyll Island, Georgia to form a new banking cartel with the express purpose of forcing the United States to accept a private central bank, with the aim of placing complete control of the United States money supply once again under the control of private bankers.

Owing to hostility over the previous banks, the name was changed from the Third Bank of the United States to “The Federal Reserveˮ system in order to grant the new bank a quasi-governmental image, but in fact it is a privately owned bank, no more “Federalˮ than Federal Express.

In the following video, former Chairman of the FED Allan Greenspan admits the Federal Reserve is a private bank and answers to no government authority.

The Federal Reserve is also exempt from all taxation, except property tax.

“Neither paper currency nor deposits have value as commodities. Intrinsically, a ‘dollar’ bill is just a piece of paper. Deposits are merely book entries.ˮ – Modern Money Mechanics Workbook, Federal Reserve of Chicago, 1975.

“I am afraid the ordinary citizen will not like to be told that the banks can and do create money. And they who control the credit of the nation direct the policy of Governments and hold in the hollow of their hand the destiny of the people.ˮ – Reginald McKenna, as Chairman of the Midland Bank, addressing stockholders in 1924

The 16th Amendment and the Income Tax

1913 proved to be a transformative year for the nation’s economy, first with the passage of the 16th “income taxˮ. Amendment and the false claim that it had been ratified.

“I think if you were to go back and try to find and review the ratification of the 16th amendment, which was the internal revenue, the income tax, I think if you went back and examined that carefully, you would find that a sufficient number of states never ratified that amendment.ˮ – U.S. District Court Judge James C. Fox, Sullivan Vs. United States, 2003

Later that same year, and apparently unwilling to risk another questionable amendment, Congress passed the Federal Reserve Act over Christmas holiday 1913, while members of Congress opposed to the measure were at home. This was a very underhanded deal, as the Constitution explicitly vests Congress with the authority to issue the public currency, does not authorize its delegation, and thus should have required a new Amendment to transfer that authority to a private bank. But pass it Congress did, and President Woodrow Wilson signed it as he promised the bankers he would in exchange for generous campaign contributions. 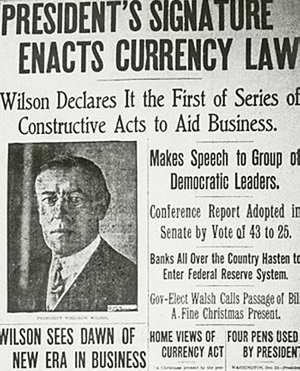 News report of Wilson’s signing the Federal Reserve Act. Under the Constitution, only a new Amendment could transfer the government’s authority to create the currency to a private party.

Thomas Edison, arguably the most brilliant man of the age, was also well aware of the fraud of private central banks.

“People who will not turn a shovel full of dirt on the project nor contribute a pound of material, will collect more money from the United States than will the People who supply all the material and do all the work. This is the terrible thing about interest. But here is the point: if the Nation can issue a dollar bond it can issue a dollar bill.

Whereas the currency, the honest sort provided by the Constitution pays nobody but those who contribute in some useful way. It is absurd to say our Country can issue bonds and cannot issue currency. Both are promises to pay, but one fattens the usurer and the other helps the People. If the currency issued by the People were no good, then the bonds would be no good, either.

It is a terrible situation when the Government, to insure the National Wealth, must go in debt and submit to ruinous interest charges at the hands of men who control the fictitious value of gold.

Look at it another way. If the Government issues bonds, the brokers will sell them. The bonds will be negotiable; they will be considered as gilt edged paper. Why? Because the government is behind them, but who is behind the Government? The people. Therefore it is the people who constitute the basis of Government credit.

The next year, World War One started, and it is important to remember that prior to the creation of the Federal Reserve, there was no such thing as a world war.

Although the war started between Austria-Hungary and Serbia, it quickly shifted to focus on Germany, whose industrial capacity was seen as an economic threat to Great Britain, who saw the decline of the British Pound as a result of too much emphasis on financial activity to the neglect of agriculture, industrial development, and infrastructure (not unlike the present day United States).

Although pre-war Germany had a private central bank, it was heavily restricted and inflation kept to reasonable levels. Under government control, investment was guaranteed to internal economic development, and Germany was seen as a major power. So, in the media of the day, Germany was portrayed as the prime opponent of World War One, and not just defeated, but its industrial base flattened.

Following the Treaty of Versailles, Germany was ordered to pay the war costs of all the participating nations, even though Germany had not actually started the war. This amounted to three times the value of all of Germany itself.

Germany’s private central bank, to whom Germany had gone deeply into debt to pay the costs of the war, broke free of government control, and massive inflation followed (mostly triggered by currency speculators), permanently trapping the German people in endless debt.

When the Weimar Republic collapsed economically, it opened the door for the National Socialists to take power. Their first financial move was to issue their own state currency which was not borrowed from private central bankers.

Freed from having to pay interest on the money in circulation, Germany blossomed and quickly began to rebuild its industry. The media called it “The German Miracleˮ.

Time magazine lionized Hitler for the amazing improvement in life for the German people and the explosion of German industry, and even named him Time Magazine’s Man Of The Year in 1938. 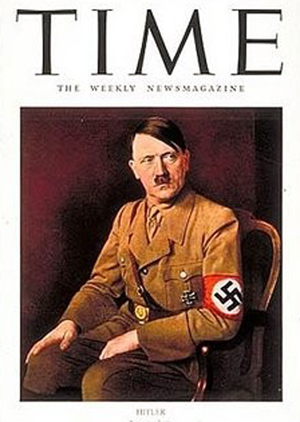 Hitler as Time’s Man Of The Year

“Should Germany merchandise (do business) again in the next 50 years we have led this war (WW1) in vain.ˮ – Winston Churchill in The Times (1919)

“We will force this war upon Hitler, if he wants it or not.ˮ – Winston Churchill (1936 broadcast)

“Germany becomes too powerful. We have to crush it.ˮ – Winston Churchill (November 1936 speaking to US General Robert E. Wood)

“This war is an English war and its goal is the destruction of Germany.ˮ – Winston Churchill (Autumn 1939 broadcast)

“Not the political doctrine of Hitler has hurled us into this war. The reason was the success of his increase in building a new economy. The roots of war were envy, greed and fear.ˮ – Major General J.F.C. Fuller, historian, England

Germany’s state-issued value based currency was also a direct threat to the wealth and power of the private central banks, and as early as 1933 they started to organize a global boycott against Germany to strangle this upstart ruler who thought he could break free of private central bankers!

As had been the case in World War One, Great Britain and other nations threatened by Germany’s economic power looked for an excuse to go to war, and as public anger in Germany grew over the boycott, Hitler foolishly gave them that excuse. Years later, in a spirit of candor, the real reasons for that war were made clear.

“The war wasn’t only about abolishing fascism, but to conquer sales markets. We could have, if we had intended so, prevented this war from breaking out without doing one shot, but we didn’t want to.ˮ – Winston Churchill to Truman (USA March 1946)

“Germany’s unforgivable crime before WW2 was its attempt to loosen its economy out of the world trade system and to build up an independent exchange system from which the world-finance couldn’t profit anymore. We butchered the wrong pig.ˮ – Winston Churchill (The Second World War, Bern, 1960)