An MD Regrets And Apologizes About Vaccine Ignorance: A True Story 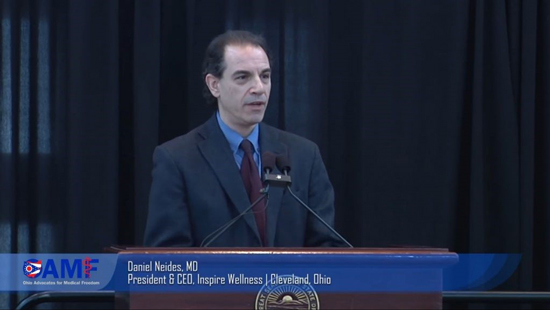 Seeing vaccine adverse reactions may not make one a believer, but personally experiencing a vaccine’s adverse effects event makes one become an activist!
That was the apparent “cause and effect” event from receiving an annual flu vaccine which made one medical doctor decide to investigate what he had not been taught about in medical school, i.e., vaccine ingredients!

According to Dr. David Neides, MD, a former healthcare physician at the Cleveland Clinic, in November of 2016 he was working for a medical facility, which required employees to receive the annual flu vaccine. He and four other employees decided upon and received the “preservative-free” flu vaccine and immediately contracted the flu! All five of them had the flu and experienced the same symptoms!

Dr. Neides realized after reading Dr. Paul Thomas’s book Vaccine Friendly Plan that there are some super serious questions to be asked regarding the Hepatitis B vaccines given to infants within 24 hours of birth, whereby 250 nanograms of ALUMINUM are injected into newborns, whose immune systems are not fully developed! At that point of his research he realized: “What have I done to my own family?”.

As a result of his investigations, Dr. Neides has become a “pro patient” physician who believes in and practices fully-informed consent on the part of the patient. He believes patients should know the risks versus the benefits. He further believes in the Geneva Convention’s dictate “no medical intervention without patients’ consent” – something that does not happen regarding the administration of vaccines/vaccinations. Parents and healthcare consumers are told vaccines are safe and effective, but not given the information in vaccines package inserts explaining Contraindications, Adverse Reactions, and Ingredients!
Vaccines are in direct violation of the medical oath doctors take: “First, do no harm!”

Dr. Neides found there was ethylmercury and aluminum in many vaccines, especially those given to infants, toddlers, and teens, which potentially can and do lead to acute and chronic diseases.
The doctor further relates how he cautioned pregnant females about not eating tuna fish while pregnant due to its mercury content, but he became horror-struck at the fact when he realized he was mandated to give pregnant mothers a flu vaccine containing mercury! That made no scientific sense to him.

Furthermore, he’s quick to point out the conflicts of interest regarding physicians and vaccines.
However, the most humbling of personality traits Dr. Neides possesses is his genuine remorse for not knowing about vaccines and the harms he inadvertently may have caused patients. He apologizes profusely in the video below, which is very humbling to see and hear – a medical doctor remorseful for not knowing what he should have known to be able to prevent health harms to patients.

Dr. Neides says: “We are a very sick population.” Indeed, the Americans are spending $3.5 Trillion or 18 percent of GDP on healthcare! By 2040, they will be spending 33 percent of GDP on healthcare!
Question: What percentage of that GDP is a manufactured “cause and effect” from the vaccine industry’s pseudoscience of injecting neurotoxic chemicals into newborns, infants, toddlers, teens, adults, and senior citizens?

Dr. Neides is a very brave physician for speaking out factually about vaccines, especially since many doctors who have seen the scientific “light” about vaccine pseudoscience become targeted individuals for various reasons, e.g. harassment, losing medical licenses, and some even have lost their lives under questionable circumstances. Please remember this doctor in your prayers, for safety and guidance. And that many more MDs will follow in his awakening and ability to speak out.

For a better understanding of what many of those toxic chemicals do in the human body, as per science and peer review studies, but apparently suppressed in allopathic medicine, readers may want to check out the book Vaccination Voodoo, What YOU Don’t Know About Vaccines.

When will the US Congress fix the problem it created when it passed, according to Wikipedia, “The National Childhood Vaccine Injury Act (NCVIA) of 1986 (42 U.S.C. §§ 300aa-1 to 300aa-34) [that] was signed into law by President Ronald Reagan as part of a larger health bill on Nov 14, 1986, in the United States, to reduce the potential financial liability of vaccine makers due to vaccine injury claims”?