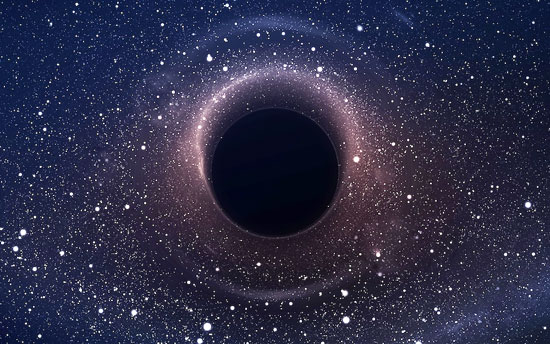 Very little is known about black holes. The theory states that deep within black holes there is a region referred to as the “gravitational singularity center where space-time curves towards infinityˮ, and scientists indicate that no matter passing through can survive. However, new studies from june 2017, provide new theories.

Thanks to a recent study, scientists believe that there may be a way out through a wormhole located at the center of every black hole. This wormhole can act as a cosmic back door leading towards unknown parts in the universe.

According to the new “radicalˮ theory, anything that gets sucked into the black hole would be stretched to its extreme, but returned to normal size when it exists in a different part of the Universe.

All of the above was recently proposed by scientists from the Institute of Corpuscular Physics in Valencia who have proposed an entirely new scenario that considered the singularity inside black holes as an imperfection in the geometric structure of space-time.

In order to test their theory and see if they were onto something, scientists took a somewhat uncommon approach. Using geometric structures reminiscent to a graphene crystal layer which allegedly matches the activity inside black holes, researchers performed a number of tests. They focused on a type of black hole which is motionless and electrically charged for their study.

“Black holes are a theoretical laboratory for trying out new ideas about gravity. Just as crystals have imperfections in their microscopic structure, the central region of a black hole can be interpreted as an anomaly in space-time, which requires new geometric elements, in order to be able to describe them more precisely. We explored all possible options, taking inspiration from facts observed in nature,” said Gonzalo Olmo, a Ramón y Cajal researcher at the University of Valencia.

Researchers discovered by analyzing new geometries the existence of a central spot with a small spherical surface, representing a wormhole at the center of a black hole.

Olmo explained: “Our theory naturally resolves several problems in the interpretation of electrically charged black holes. In the first instance, we resolve the problem of the singularity, since there is a door at the center of the black hole, the wormhole, through which space and time can continue.”

Researchers found through equations that a wormhole found at the center would be composed of a size smaller than the atomic nucleus. However, it would increase in size about the charge stored inside a particular black hole.

This means that anything that passes through it would be stretched to the limit, allowing it to enter the wormhole. Upon exciting, the object would be restructured and returned to normal size. Whether or not a human would be able to survive this process is still an enigma.

Interestingly, the new research suggests that there is no need for exotic energy to create a wormhole as Einstein’s theory of gravity indicates.

Researchers explained that in their theory, a wormhole appears out of ordinary matter and energy, such as an electric field.