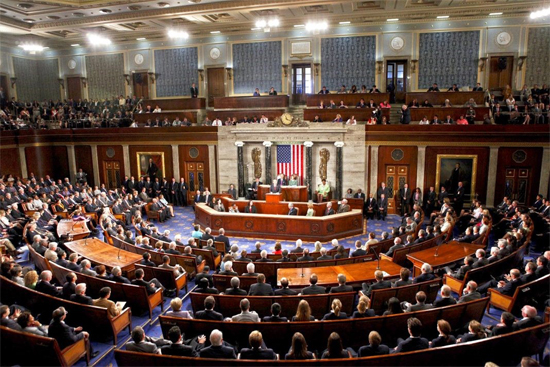 A group of US senators have put forth a new Authorization for the Use of Military Force (AUMF) bill that would limit American President’s authority to attack other countries, days after Trump ordered a missile attack on Syria.

Unveiled in April (2018) by Senators Bob Corker, the Republican chairman of the Foreign Relations Committee, and Tim Kaine, a committee Democrat, the new AUMF bill allows any sitting US president to take military action against terror groups like al-Qaeda, the Taliban, Daesh and other non-state actors.
However, in order to attack any nation state, for instance Syria, the bill suggests that the president must first inform Congress and give lawmakers two months to decide whether military action is necessary.

Without any expiration date, the new AUMF will replace the 2001 war authorization act passed by Congress in the days following the September 11 attacks, which prompted a so-called War on Terror campaign that is still ongoing.
The US Congress passed another AUMF in the following year to authorize the war on Iraq. That legislation has also been used to justify a wide range of conflicts since then.

The new legislation would repeal the previous AUMFs and would also require Congress to review the AUMF every four years. This means the president should ask lawmakers to either repeal, modify, or keep the current AUMF. Should Congress fail to pass the new bill, the existing authority will continue.
Corker said he expected the foreign relations committee debate and possibly vote on the new bill soon.

“There have been a number of efforts over the years to update these authorities, and while there is still work ahead, I am pleased that we have reached an agreement on a product for the committee to consider and that I hope will ultimately strike an appropriate balance of ensuring the administration has the flexibility necessary to win this fight while strengthening the rightful and necessary role of Congress”, the Tennessee lawmaker said.

Kaine, who ran against Trump alongside Democratic presidential nominee Hillary Clinton in the 2016 US presidential election, said he hoped the president would realize that it was up to Congress to authorize wars.
“I hope President Trump will follow the American constitution”, the Democratic senator said. “It’s very, very clear Congress has the power to declare war – and only Congress.”
Trump did not seek congressional approval for the April 14 attack against several Syrian military targets, which was jointly carried out with the UK and France.

Note: This is a good step by the Senate to reign Trump in a bit, but ducks the elephant in the living room, which is dealing with the War of Terror that the US has been engaged in since 9-11.
Even the Special Operations Command is running off the books operations, with black money, from private contractor bases, not only outside the normal chain of command, but holding themselves out as representing the American government in the process, an outrage.

The line as to how contrived this is, meaning having plausible deniability for the politicians, versus are they really in the dark as to the scale of how bad it is, is still foggy. Along with deniability you often have the “don’t want to know” issue, which real journalists run into all the time with mid-level professionals that never want to rock the boat.

This “it’s above my pay grade” thinking is a major problem and has widely infected the officer corps of all the services. Not only do they not want to deal with it, but not even mention it. Their courage hisses out of them like a tire going flat when bringing it up. And even worse, many look forward to their joining the dark forces someday.