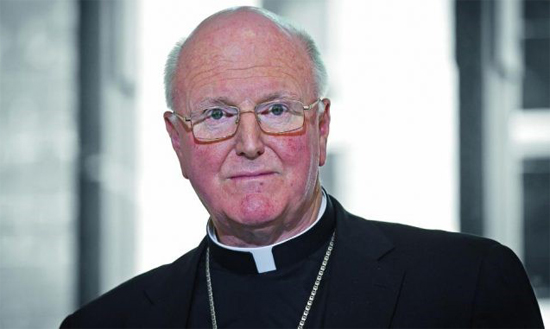 Australia’s most powerful clergy, Archbishop of Melbourne Denis Hart, says the Catholic practice of confession is satisfactory for dealing with pedophilia in the church as it helps priests absolve “their own guilt” after sexually abusing children.

Asked whether he was prepared to be jailed for failing to report child sex abuse by Catholic pedophile priests, Archbishop Hart confirmed he was willing to serve prison time. He also claimed the right to cover for pedophiles in the church is an “absolutely sacrosanct communication of a higher order.”

He made the shocking statement in response to the Australian Royal Commission into Institutional Responses to Child Sexual Abuse which stated there should be “no excuse, protection nor privilege” for Catholic clergy who failed to alert police of abuse within the church.

A new report by the commission proposed 85 sweeping changes to the criminal justice system and recommended that priests face criminal charges for failing to report serious crimes such as sexual abuse to the police.

As the law currently stands, clergy are not legally obliged to report crimes to the police and disciplinary proceedings for criminal activity by members of the Catholic Church are handled internally by Canon law, which operates independently of the regular legal procedure.

Following an investigation by the commission, officials believe that the Catholic Church is using “confessional confidentiality” as a cover for not reporting child sex abuse by active pedophiles to the authorities.

“We understand the significance of religious confession – in particular, the inviolability of the confessional seal to people of some faiths, particularly the Catholic faith”, said the report. “However, we heard evidence of a number of instances where disclosures of child sexual abuse were made in religious confession, by both victims and perpetrators.
We are satisfied that confession is a forum where Catholic children have disclosed their sexual abuse and where clergy have disclosed their abusive behavior in order to deal with their own guilt.”

Asked if he would rather go to prison than breach the seal of confession, he told ABC Radio Melbourne: “I’ve said that I would. I believe that this is an absolutely sacrosanct communication of a higher order.”