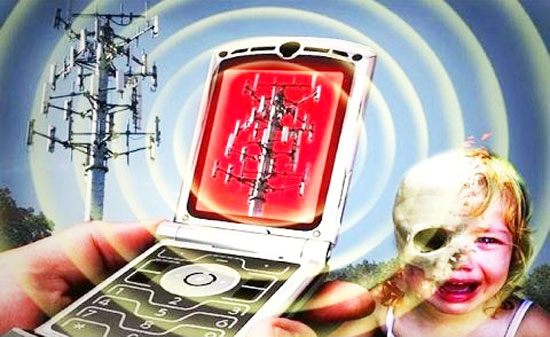 Amidst concern over President Trump’s emasculation of the US Environmental Protection Agency, and cuts to the USA’s climate research, other ground-breaking areas of environmental research are being ignored.

For well over a decade, at a cost of $25 million, a US National Toxicology Program study has been assessing the links between the uses of mobile phones and rare, though increasing forms of cancer.
Unfortunately, before the results of this study are published, it may be lost in the funding cuts.

Donald Trump’s policies are not revolutionary. They reflect a general opposition by right-wing lobby groups to environmental and social campaigns.

Just like the UK Coalition Government’s Bonfire of the Quangos in 2011/12, Trump’s cuts are aimed at removing any authoritative opposition to the liquidation of the Earth’s last natural resources – irrespective of the costs to human health and the environment.

Who will rid us of these turbulent scientists?

Given the USA’s lead in science and consumer technology, and the novel public health research such innovations generate, Trump’s new budget could have global implications for public health.

The Department for Health and Human Services (DHHS) funds the USA’s leading public health institutes. As part of Trump’s attempt to nullify environmental opposition in the USA, a long-standing objective of the political-right, the DHHS’ budget is being cut by 18%, or about $15.1 billion.

That will have wide-ranging effects on its dependent research agencies.
The National Toxicology Program, maintained by the National Institutes of Health (NIH) is one such example. At present cuts to the NIH, which has seen increases in its funding over recent years, are believed to be around 20% of its budget, roughly $5.8 billion.
Ultimately it is up to the US Congress to decide on the precise level of funding. That in turn depends upon the willingness of the Republican majority to follow Trump’s skinny budget proposals.

Historically concerns about radio frequency (RF) radiation – and the official claims of safety for mobile phone use – were based on its heating effect. Microwaves, like those used in kitchen ovens, heat-up materials as they are absorbed.

The levels of heating caused by mobile phones were so small they were considered insignificant for health. On that basis governments, mobile phone companies, and just about everyone with an interest in mobile communications, claimed that their use entailed no public health risk.

However, even before their use became widespread in the last 10 to 15 years, the heating hypothesis was challenged by evidence of health impacts associated with heavy mobile use – including headaches, skin irritation, nausea, and cancer.

Concerns over the non-thermal level of health impacts began to arise in the 1990s, but the result of initial scientific reviews was essentially, we don’t know.
There was insufficient evidence to assess the risks to human health.

The need for long-term studies

In 1999, the US Food and Drug Administration nominated the effects of mobile phone radiation for research by the US National Toxicology Program (NTP). That was because while mobile phone use had become widespread, little was known about the human health impacts of low level RF radiation exposure.

NTP designed a long-term study where animals would be irradiated by different kinds of mobile phone radiation – to take account of the differing mobile technologies. This was done in a closely controlled environment, so that the effects of mobile radiation could be differentiated from other confounding factors – something that many other studies have failed to do.

The study began, and… nothing; which is the issue with long-term exposure studies – they take time to produce a result.
In the interim, various scientists recommended precaution in the use of mobile phones, though governments and the telecommunications industry have ignored that advice.

Category 2B: possibly carcinogenic to humans 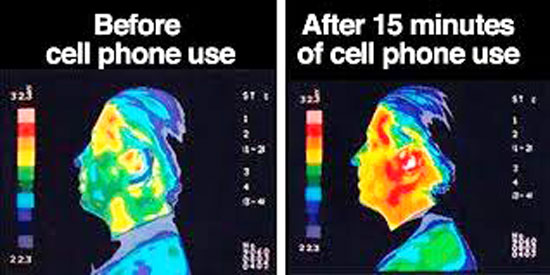 Another official study, carried out by the World Health Organization’s Interphone Study Group, published its results in 2010.
Using epidemiological data they concluded there was “no increase in risk” of cancer – although they accepted there may be a weak association with one specific type of cancer, glioma, amongst the heaviest mobile users.

In 2011, contrary to the mollifying statements from the industry, the World Health Organisation’s International Agency for Research on Cancer (IARC) declared that: “The evidence, while still accumulating, is strong enough to support a conclusion and the 2B (possibly carcinogenic to humans) classification. The conclusion means that there could be some risk, and therefore we need to keep a close watch for a link between cell phones and cancer risk.”

In response to the IARC statement, the European Environment Agency recommended “taking a precautionary approach to policy making in this area.”
As yet that call has not been heeded by many EU governments and regulators, and certainly not in the UK, where wireless connectivity is seen as a driver of economic growth.

WiFi and the exponential growth of connectivity

From the 2000s, research widened beyond mobile phones to look at all forms of wireless communication – given that the use of WiFi had become widespread.
Around this time stories began to emerge about electrosensitive people who were adversely affected by RF radiation. Sometimes mocking, these articles often claimed no proof – though symptoms were demonstrable, and research studies have shown that some people are able to sense RF radiation within the bounds of statistical certainty.

Again, as with early mobile phone studies, WiFi-related studies produced no certain outcomes for human health – due to the lack of controlled research.
As a result, and without requiring that a safety case be proven, governments and the industry have rolled-out the installation of WiFi across society.

The political bias against precaution

The difficulty is that studies which produced no clear-cut result tend, on the basis of the precautionary approach, to call for preventative action in advance of certain scientific evidence.

Precautionary action is mandated under United Nations agreements on sustainability, and under European law.

Unfortunately the precautionary principle is one of the issues which are toxic to right-wing politicians (especially in the USA). They believe it harms economic growth as it seeks to restrict people’s rights to pollute or damage the environment.

The lack of precautionary action has meant that the use of all kinds of high-frequency communication systems has grown exponentially. Most notably, WiFi. Not only in the home, where we have a choice of exposure, but also deliberately installed in public places – often with government support and financing.

Clearly on the thermal effects issue, it is true that the effect is insignificant. But the possibility of non-thermal mechanisms which are deleterious to human health cannot be excluded.

Given the consistent evidence of some kind of non-thermal causal mechanism for health impacts, there is no proof that mobile phones or WiFi systems are safe.

2016: NTP’s results begin to trickle out

Well over a decade after it started the National Toxicology Program’s long-term study started to yield results. In May 2016 the NTP released a draft report on the study’s findings. A review in Science summed-up the results:

“Male rats exposed to cell phone radiation in a large US government study were more likely to develop rare brain and heart cancers, a preliminary analysis has found, adding weight to concerns the ubiquitous devices could pose a health risk to people.”

A more detailed review in Scientific American highlighted the finding of a correlation between exposure to RF radiation and increasing cancer rates in the exposed group of rats.

While accepting the results were not definitive, researchers commented that the use of so many animals over such a long period was significant, and raises serious question about the safety of mobile phones. At the same time sceptics, quite rightly, pointed out that the draft was an incomplete, un-reviewed digest of the findings of the research project.

The NTP’s scientists are currently working toward producing a final report on the study. NTP announced that a research paper would not be published in its own right. Instead a final report would be published in December (2017).
This is why the possible cuts to the NTP’s budget are problematic. They could be used as a pretext for preventing the final publication of the results.

Might there be industry pressure to kill the study?

The US Centres for Disease Control and Prevention (CDC) has information on their website which states: “Can using a cell phone cause cancer? There is no scientific evidence that provides a definite answer to that question.”
There is also a sidebar entitled: “Why has the information on this page been updated?” That sidebar is the result of a controversy stoked over changes to the original format of the page – which indicated that mobile phone users should take a more cautious approach to their use.

The events surrounding that are outlined in a New York Times article, based on emails released after a freedom of information request, which outlined the pressure applied to the CDC to change its public advice.
One of the groups leading the campaign against warnings on the use of mobile phones was Breitbart – the alt-right news site, run at that time by Trump’s chief strategist, Steve Bannon.

However, there is hope that the results will emerge, somehow. Regarding the possibility of the industry pressuring the US government to bury the NTP’s report, Dr. Louis Slesin, the editor of Microwave News, commented: “A possible indirect effect is that the Trump administration could hold up the release of the report as a favour to the telecom industry. If that were to happen, I would hope that the report might be leaked – as was the case with those preliminary results we published last May, which prompted the NTP to officially release them a few days later.”

Why the evidence demands precautionary action 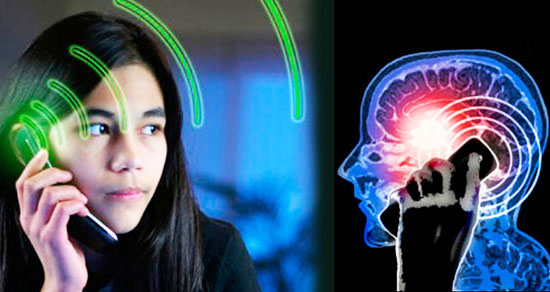 Recently a key paper on the effects of mobile phones on cancer rates in Britain had to be corrected. It had used the wrong data. What the new data showed was an increasing incidence of glioma in the UK – one of the cancers highlighted in the NTP’s study, as well as the Interphone study which had dismissed a link to cancer.
Yet the official advice from the UK’s NHS is that “most current research suggests it’s unlikely that radio waves from mobile phones or base stations increase the risk of any health problems.”

There is insufficient research to demonstrate the health effects from mobile phones and, perhaps more significantly due to the longer-term exposure, from WiFi – though evidence of effects does exist.
Yet despite the calls for precaution from scientists, year on year, the flux of high frequency electromagnetic energy in the environment continues to grow stronger, as use of these systems grows exponentially.

The global mobile phone industry has revenues of around a trillion dollars. And in addition to workplace and home computers, WiFi enables the Internet of Things – which is forecast to quadruple in size by 2020 to a market worth $4 billion.

If more definite evidence on the health impacts of mobile communications and WiFi arises over the next few years, will our politicians and regulators be able to stand-up to that kind of economic pressure – as well as public pressure from addicted mobile users?

There is a long-standing debate over safety in our modern, technological world, in particular, the role of radiation to that overall level of safety. In part that’s because radiation is an involuntary risk; by its nature, you have no choice to avoid its hazards if your environment is polluted by it.

The difficulty is that personal choice is removed when public spaces are being deliberately wired for wireless communications, most notably, WiFi in public buildings and on public transport. People may wish to limits their exposure, but society is not allowing that because of its incessant drive towards mobile communications.
As the social and economic pressure for wireless connectivity grows, how are we limiting our exposure to RF radiation?