Video of Boeing 787 leaving huge plumes of chemicals in sky 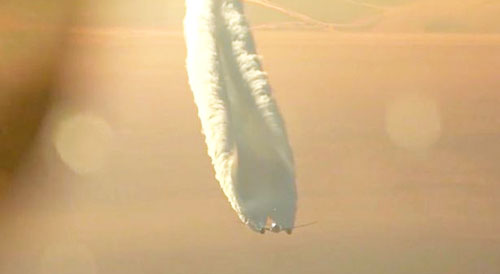 Incredible footage has emerged at the end of June, that has captured a chemtrail-spraying Boeing 787 pumping plumes of toxic chemicals into the atmosphere. The stunning video was filmed from the window of another plane as the Boeing 787 appears to malfunction as it’s flown at 33.000 feet over the east coast of Russia.

The person who filmed the video said that they originally thought airplane contrails were “just the result of hot exhaust mixing with cold air with a high moisture contentˮ, but said that the chemtrails pumping out of this plane “looked dark against the rising sun.ˮ

Boeing has claimed that their new 787 Dreamliner’s are seen as a revolutionary new “greenerˮ, “jet lag-bustingˮ passenger plane, but this new footage seems to prove otherwise.

According to the Mirror, it was supposed to be the greatest advance in aviation since Concorde.

It also emerged recently that high levels of air pollution caused by chemtrails could be blamed for a bad night’s sleep. People living in areas with raised nitrogen dioxide were found to be up to 60 percent more likely to suffer from sleep deprivation than those living in areas with lower pollution levels, according to research. A study involving 1.863 people, suggests the impact of air pollution on the respiratory and central nervous system ultimately has an effect on how well people sleep.

According to Telegraph, the seemingly random appearance of “contrailsˮ, as these lines of condensation are commonly called, is evidence of a global conspiracy.

The clouds are, according to some, in fact, “chemtrailsˮ – chemical or biological agents sprayed at high altitude for any number of top secret reasons. The chemtrail theory has been discussed on radio talk shows and raised by politicians, while US government agencies report calls from irate citizens demanding an explanation.

The trails which arouse the most suspicion are those that remain visible for a long time, dispersing into cirrus-like cloud formations, or those from multiple aircraft which form a persistent noughts-and-crosses-style grid over a large area.

What possible reason would the world’s governments have for jettisoning vast quantities of chemicals into the stratosphere? It is an attempt to control global warming, according to the fake official version, while many cite far more sinister goals, such as human population control, psychological manipulation, and military weapons testing. The trails, it’s been claimed all the time that are also to blame for health problems and respiratory illness.