US team that ‘experimented in aliens and UFOs’ revealed 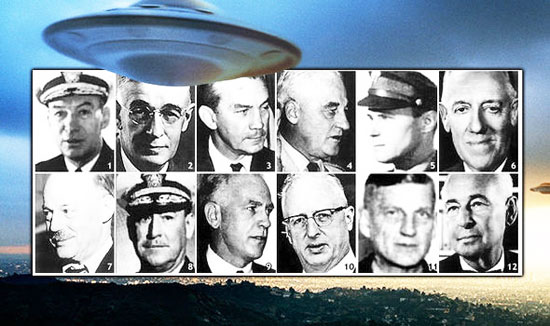 The team of 12 that secretly experimented on UFOs

The 47 page “above top secretˮ file has been released and contains claims that the 1947 Roswell UFO crash did happen, dead aliens were found and there was a major cover-up to hide the truth.

The document was leaked to the host of US late-night online paranormal radio show Midnight in the Desert, Heather Wade, from a known source who has not been named. The release has set the conspiracy world on fire, with many UFO experts convinced it could be genuine.

The document claims a highly secretive team of top scientists, government officials and military leaders, all now dead, was set up in the wake of the Roswell incident to investigate the “captured flying saucer remainsˮ and “four dead aliensˮ and assess the risk to the planet of “visiting aliensˮ.

The document claims the group was called Majestic 12 and set up on the orders of President Harry S Truman, in the wake of Roswell. It identifies these people as the original members:

Lloyd Viel Berkner, an American physicist, and engineer, who died in 1967 aged 62, and had investigated the Earth’s atmosphere.

Detlev Wulf Bronk, another US scientist, educator, who died aged 78 in 1975, and was recognized for developing biophysics as an established science.

Vannevar Bush, an American engineer and inventor and scientist, who led the US Office of Scientific Research and Development during World War II. It carried out military research and development. He died aged 84 in 1974.

Donald Howard Menzel, who died in 1976 aged 75, who was one of the first theoretical astronomers and astrophysicists in the US, and discovered the physical properties of the solar chromosphere, the chemistry of stars, the atmosphere of Mars, and the nature of gaseous nebulae.

Hoyt Sanford Vandenberg, a US Air Force general, its second Chief of Staff, and second Director of Central Intelligence, who died in 1954 aged 54.

Nathan Farragut Twining, who died in 1982 aged 84, who was Chief of Staff of the United States Air Force from 1953 until 1957, and during the Roswell UFO incident.

Sidney William Souers, who died in 1973 aged 80, and was a former director of central intelligence, and the executive secretary of the National Security Council, before becoming a special consultant to the President on military and foreign affairs from 1950 to 1953.

Robert Miller Montague, a Lieutenant General in the US Army who was deputy commander of Fort Bliss, Texas, and commander of the Sandia Missile Base in New Mexico, who died in 1958 aged 58.

James Vincent Forrestal, who died in 1949 aged 57, and was the first United States Secretary of Defense.

Gordon Gray, who died in 1982 aged 73, who was a defense and national security government official.

Jerome Clarke Hunsaker, who died aged 98 in 1984, and was from 1941 to 1956 chairman of the National Advisory Committee for Aeronautics.

Part of the document, a four-page report, said to have been prepared on January 8, 1989, claims to be a preliminary briefing about Majestic 12. The report says the group had the remains of seven crashed flying saucers and 27 aliens. Seasoned UFO expert and nuclear physicist Stanton Friedman is investigating the authenticity of the document and is said to believe it could be genuine. The Paradigm Research Group (PRG) which tries to pressure the White House to disclose documents about UFOs believes the report to be genuine.