Chinese Scientists Did a Soft Disclosure on Free Energy

Chinese scientists announced (in January 2017) that they have successfully recreated NASA’s “impossible” EmDrive, an engine that works entirely on electromagnetic radiation. The prototype has been published in full detail in the peer-reviewed journal Propulsion and Power.

Scientists from the Chinese Aerospace Science and Technology Corporation (CASC) claim NASA’s results “re-confirm” what they’d already achieved.
The free-energy “reactionless” Electromagnetic Drive uses only electricity, and defies widely accepted laws of physics. The EmDrive has already been launched into space, and at a press conference in Beijing, researchers said that the Chinese plan to use it to power satellites “as quickly as possible”.

In another paper the propulsion theory behind the EmDrive is explained more thoroughly: “At first sight the idea of propulsion without propellant seems impossible. However the technology is firmly anchored in the basic laws of physics and following an extensive review process, no transgressions of these laws have been identified.

The principle of operation is based on the well-known phenomenon of radiation pressure. This relies on Newton’s Second Law where force is defined as the rate of change of momentum. Thus an electromagnetic (EM) wave, travelling at the speed of light has a certain momentum which it will transfer to a reflector, resulting in a tiny force.

If the same EM wave is travelling at a fraction of the speed of light, the rate of change of momentum, and hence force, is reduced by that fraction. The propagation velocity of an EM wave, and the resulting force it exerts, can be varied depending on the geometry of a waveguide within which it travels. This was demonstrated by work carried out in the 1950’s. (CULLEN, A.L. Absolute Power Measurements at Microwave Frequencies, in IEE Proceedings Vol 99, Part 1V, 1952, p.100)

Thus if the EM wave travelling in a tapered waveguide is bounced between two reflectors, with a large velocity difference at the reflector surfaces, the force difference will give a resultant thrust to the waveguide linking the two reflectors. If the reflectors are separated by a multiple of half the effective wavelength of the EM wave, this thrust will be multiplied by the Q of the resulting resonant cavity, as illustrated in fig 1.” 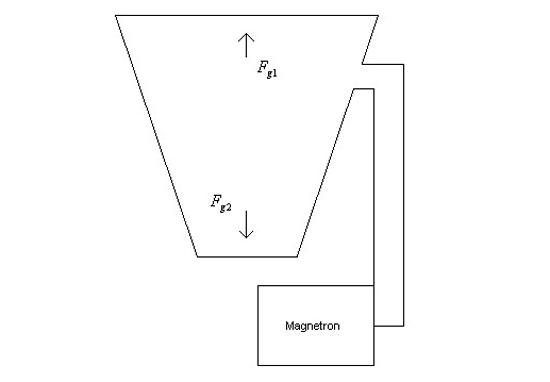 The engine could also send people to Mars in as few as 70 days (as compared to 300 days using the current technology), according to the scientists’ findings.

In a leaked paper, NASA puzzled over the “physics-defying” thruster which continuously provided positive results when tested. The findings were disclosed by a research group led by Dr. Harold “Sonny” White at the Johnson Space Center (JSC) in June of 2014, which made waves throughout the scientific and technical communities.

However, Prof. Juan Yang in China was publishing her research into EmDrive technology as early as 2010. With the latest soft disclosure that the EmDrive prototype made by Chinese scientists is indeed working, we may have just observed China beat the U.S. to the proverbial free-energy finish line.

The EmDrive was first proposed as an alternative to rocket-fueled engine technology by British engineer Roger Shawyer. He generated electricity to generate movement simply by bouncing microwaves around a cone-shaped chamber that would then create radiation pressure. The device used no propellant, and so there was no exhaust.
The EmDrive is already being tested on thrusters on the Tiangong 2 and X37B space planes.

What other fascinating free energy technologies are about to be disclosed?